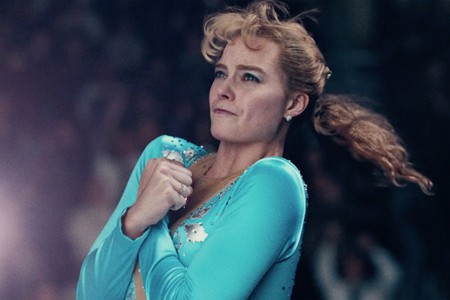 Toward the end of the Tonya Harding psychodrama I, Tonya, the “white-trash” outlaw hoyden of ice skating does her makeup in front of a mirror just before her fateful appearance at the 1994 Lillehammer Olympics. The scene, like much of director Craig Gillespie’s inspired meta-mockumentary, breaks the fourth wall. Margot Robbie’s strung-out Tonya looks directly into the camera—at herself and us simultaneously.

It’s the scariest moment in a film that isn’t short on domestic violence, as meted out to Tonya by her hubby Jeff Gillooly (Sebastian Stan), and vice versa. Given the crocking of Tonya’s rival Nancy Kerrigan (Caitlin Carver) by Gillooly’s cloddish associates, Tonya knows she hasn’t a chance in hell of winning the gold, and she bites back tears as she cakes herself in rouge. Fleetingly, the face under the tightly pulled back dirty blonde hair becomes a Lon Chaney-like horror movie mask—her “be brave” smile the rictus smile of death. It’s the Tonya Agonistes moment. Your heart bleeds for her. 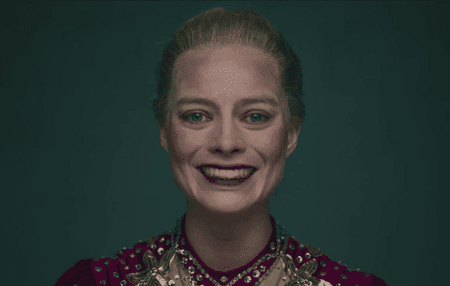 The shot recalls one earlier in the film when plucky little Tonya (Mckenna Grace), forced to stay on the ice by her chain-smoking, chain-swearing martinet mom De Vona Golden (Allison Janney at her best), despite having asked for a bathroom break, pees down her leg onto a skate. She must be wearing eye-liner because her right socket is smudged black, an almost Gothic harbinger of humiliations to come. Why doesn’t Mom scoop the tiny skater up, cuddle her, and tell her it’s all right?

Featuring Robbie’s finest acting yet—it’s a star-making performance that should snare her an Oscar nomination—I, Tonya renders Harding a scrappy, sexy, bad-ass folk heroine who was more sinned against than she sinned. Distracted by her need to get into shape for Lillehammer, she’s passively complicit in the plan by Gillooly and his oafishly criminal buddy Shawn Eckardt (Paul Walter Hauser) to send Kerrigan a death-threat letter, but not apparently in the knee-clubbing of Kerrigan organized by Eckardt and carried out by Shane Stant (Ricky Russert). 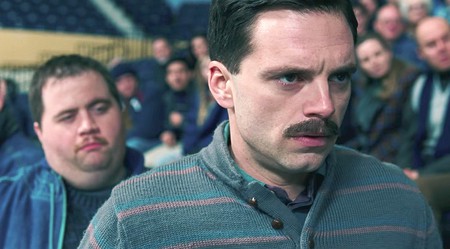 Though the abusive Gillooly, the delusional Eckardt, the sweaty Stant, and his uncle-accomplice Derrick Smith (Anthony Reynolds) are arrayed against Harding as enemies, she is psychologically bedeviled by two more formidable opponents. One is DeVona, a hard-up diner waitress who is always reminding her daughter of how much time and money she invested in her so she could become a figure-skating champion—and who withholds affection and “normal” maternal love. One of the neuroses she bequeaths to Tonya is a refusal to accept responsibility for her mistakes. In Tonya’s mouth, the words “It’s not my fault” become a litany. 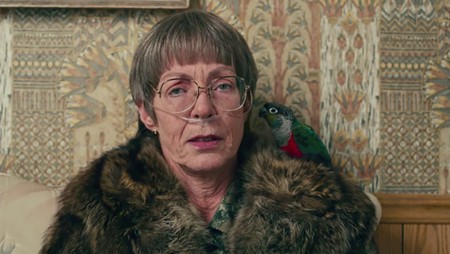 The second force that destroys Harding’s Olympic dreams is the American public, which in ’94 wolfed down every detail about “The Incident” and gloated over her fall. “It’s what you all came for, folks, the fucking incident,” Harding tells us. She isn’t wrong. We can’t escape her glare.

Noxiously rock ‘n’ roll (except for when Gillespie artfully uses Itzhak Perlman playing Vivaldi’s “Four Seasons” to transition from a mother-daughter spat to the 1986 Skate America event), I, Tonya is a flurry of action. DeVona throws a kitchen knife at Tonya—a signal for her to movie in with Gillooly. Tonya throws a skate at her long-suffering coach Diane Rawlinson (Julianne Nicholson). Tonya fires a rifle at Gillooly—and turns to the camera to say it never happened. Gillooly shoots Tonya in the side of the face.

These staccato moments augment the film’s rough Scorsese-ian poetry. The camera, for example, does a few “Copacabana” shots—one notably careering through the women skaters’ changing room at Skate America to find nervous 15-year-old Tonya taking a drag before charmingly stubbing out her cigarette with a blade. 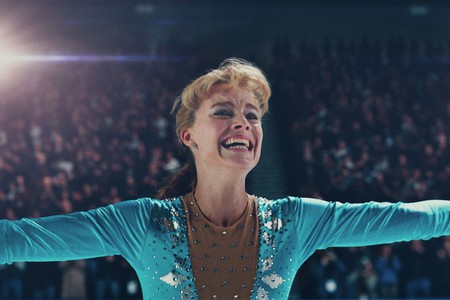 The on-camera present-tense interviews given by Harding (rueful), Gillooly (contrite), DeVona (as bitter as ever), Eckardt (delusional), Rawlinson (tactful), and Bobby Cannavale’s Hard Copy producer (sleazy) are presented in boxy frames, whereas Tonya’s haphazard journey, reconstructed in flashbacks, were shot by Nicolas Karakatsanis in the widescreen format. The contrast draws attention to the incessant mediating of her life. The film’s herky-jerky flow is itself interrupted by “epiphany” scenes—when Harding skates so powerfully and Robbie’s face and body are magically cut into the performances.

The best of these is when she pulls off her first triple axel at the 1991 U.S. Championships and glows from the triumph. “I was loved,” she recalls, a statement that only emphasizes how inadequately she was supported and adored by those closest to her, save Rawlinson. “No one asks me about it anymore,” she rues in an undertone when recalling the triple axel. She might have sung as an afterthought, “No, you can’t take that away from me.” It was glorious, and she was beautiful doing it.

I, Tonya opens in the United States on December 8.