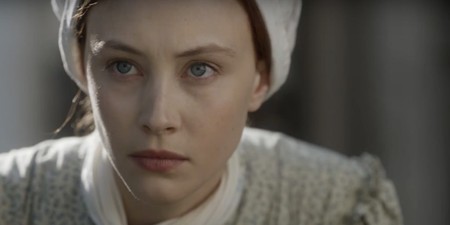 Director Mary Harron’s gripping Netfix series Alias Grace, adapted by Sarah Polley from the Margaret Atwood novel, is set in 1843 Canada. Its clear-eyed depiction of a seduction, an abortion, and a double murder makes it a resoundingly modern melodrama. Here’s what Harron had to say about it.

Since the ugly topic of man’s inhumanity to woman is in the air right now, there couldn’t be a better moment for Netflix to bow its lacerating six-part miniseries Alias Grace—this year’s second streamed adaptation of a Margaret Atwood novel. Unlike The Handmaid’s Tale, Alias Grace was based on a real-life incident.

It stars the uncanny Sarah Gadon as the thirtyish Irishwoman Grace Marks, a convicted murderer who, after serving 15 years in a Canadian asylum and prison, quietly tells her story in flashback to a sympathetic young psychiatrist, Dr. Simon Jordan (Edward Holcroft), pending a possible pardon. David Cronenberg plays a benevolent clergyman keen to see Grace freed. 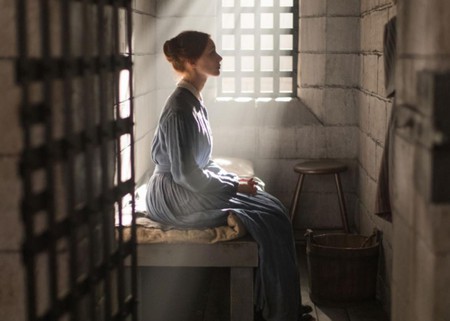 The daughter of a long-suffering woman who died on the voyage from Ireland, Grace was forced by her abusive drunk of a father to leave her younger siblings and find work after they’d crossed the Atlantic. Entering service in the house of an upper-middle-class woman, Grace was befriended by her vivacious fellow maid, Mary Whitney (Rebecca Liddiard). Seduced and abandoned by one of the sons of the household, Mary died in a puddle of blood after having a backstreet abortion.

Grace was soon hired by Nancy Montgomery (Anna Paquin), the housekeeper of independent farmer Thomas Kinnear (Paul Gross), who jealously guarded her position as his mistress. When the disgruntled stableman James McDermott (Kerr Logan) decided to kill Nancy and his boss, Grace was handed a destiny she couldn’t escape. But how innocent was she?

As cooly as Harron (American Psycho, The Notorious Bettie Page) directed Alias Grace, she left it in a tangle of deliberate ambiguities. We talked recently in a Brooklyn tearoom.

CULTURE TRIP (CT): Alias Grace is one of the most powerful statements yet about how hazardous life was for young maid servants. This is very much in the consciousness right now. There was a master-servant seduction in Downton Abbey. It’s a theme, too, in Graham Swift’s novel Mothering Sunday, which is set in the 1920s.

MARY HARRON (MH): Margaret Atwood recommended to me Life in the Clearing by Susanna Moodie, a British woman who traveled through Ontario in the 1840s and wrote about young working-class girls being sacrificed to preserve the virginity of upper- and middle-class women. If a man was engaged, he couldn’t possibly have sex with his fiancée, so he would have sex with the servants. Her estimation was that 20 percent of these girls would end up prostitutes—or dead. 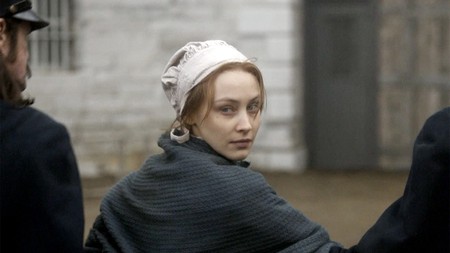 Grace (Sarah Gadon) is escorted to her cell | © Netflix

CT: It’s as if working as a maid was a form of indentured prostitution. I imagine you wanted to do more than critique Victorian moral hypocrisy, however. Alias Grace had to be relevant today, didn’t it?

MH: Yes, and I think it is. Margaret Atwood is getting at power relationships. We’ve just seen in Hollywood what women are valued for and the level of their vulnerability when they aren’t allowed to speak. It’s obviously not quite as bad as having to go drown yourself or end up on the streets, but it’s still a matter that could damage your career or life irretrievably. Alias Grace has all that resonance.

Margaret Atwood’s not at all sentimental, which I really like about her, and she’s very honest about how women can turn on each other because they have so little power. You see it in the relationship between Nancy and Grace. Whereas there was solidarity between Mary and Grace, Nancy and Grace fight each other for survival, like rats in a cage.

CT: Even the supposedly sympathetic male, Simon Jordan, is prurient about Grace’s history. His hunger for lurid details reminded me of how so-called hysterics in the asylum in the French film Augustine [2012] became objects of sexual fascination for male doctors and dignitaries invited to watch them gyrating under hypnosis.

MH: I like Simon. He’s trying to do his best. He’s manipulated by Grace, who toys with him by telling him what she wants him to hear. It’s a complicated dynamic, and there’s no simple way to sum it up. It starts out with him being this very confident professional young doctor. He comes in with all that power and authority to question Grace in prison, but by the end of that first interview she’s totally whipped him around. It’s sort of brilliant that this abused little woman of 30, the lowest of the low, who’s been in prison for 15 years, would have the presence of mind to do that. It’s a fantastic reversal of power. 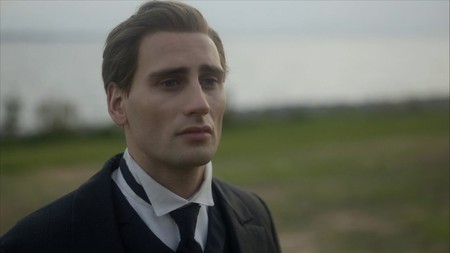 CT: Simon becomes a casualty of the case because he can’t fathom out Grace. And I guess he’s in love with her.

MH: Obsessed with her, certainly. It’s a story that has an original sin, an original crime, which is George Parkinson’s abandonment of Mary Whitney when she’s pregnant and the destruction of her. Everything stems from that callousness, and the cruelty of society in not allowing her to survive. What I love about the novel and Sarah’s adaptation is that it all stems from this very common crime. Victorian fiction could refer to it, but not directly because [writers] couldn’t talk about pregnancy and sex before marriage. Hundreds of thousands of girls were discarded because of a ridiculous hypocritical social standard about sex. They became an endless stream of ghosts.

CT: Was part of the appeal for you that Grace was an unreliable narrator?

MH: Yes, I love that in the script. I think it reflects what is interesting about a true-life mystery—we can never know the answers. The truth died with the people who died in that farmhouse on that day. So we have to speculate the way a historian would speculate about the truth. Margaret Atwood, rather than giving any answers, decided to make the story about the subjective nature of how you interpret Grace’s story. My husband [writer director John C. Walsh] said Grace is like a Rorschach test: what you see in her says as much about you.

CT: When Grace is hypnotized, it’s possible that her unconscious is speaking and that she’s possessed by Mary, or it could be that she’s fully conscious and playing a game with Simon and the townspeople who are watching. At one point, Grace looks up and sees that the the young lady of the house, the daughter of the governor, has grabbed Dr Jordan’s hand, and she calls her a slut. That element of sexual jealousy implies to me she’s fully conscious.

MH: We leave that open because it also could be that the personality of the suppressed person who’s inhabiting her at that moment is seeing that, too. I’m not a big fan of multiple-personality theories, but I do like the metaphorical idea that, because Grace isn’t allowed to express her anger, it gets transferred into this ghost being—this vengeful Mary Whitney ghost. 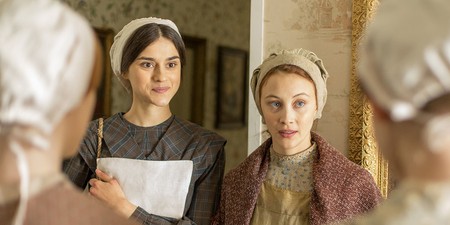 CT: Even allowing for the possibility that Grace is playacting as Mary, I think she’s entitled to claim some sort of Old Testament moral vengeance for Mary’s death by participating in the killing of Kinnear, who is a sexually exploitative employer.

MH: The amazing thing was that Grace was just turning 16. She’s just a baby really. One of the things that came out of the Harvey Weinstein situation is how all those girls were just paralyzed and didn’t know what to do because they were so young. When James McDermott initiates the murders, Grace’s impetus is not knowing what to do, so she says to herself, “I better do nothing.”

Sarah Gadon and Sarah Polley and I talked about this endlessly and spinned these different versions of how Grace would respond, because I thought it was important, particularly when I was directing Sarah [Gadon], that we had different scenarios and that she play each one. They’re all credible. It’s also credible that she was so angry, so vengeful, and hates Nancy so much that she saw [killing Kinnear and Nancy] as an escape because she knew that nothing good was going to happen. She was trapped and had to get out.

CT: Grace is very repressed, but you give free rein to her unconscious in the sexual dream she has about four men in her life.

MH: Because of the terrible experiences she’s had with her father and then seeing what happened to Mary, her sexuality—which is probably strong—has become distorted. It has dark associations for her, such as Mary’s abortion. The first thing we shot on the first day was the scene where Mary goes to the doctor. The next morning, [her fellow maids] lift the bedcovers off and they see Mary covered in blood. Sarah Gadon’s always imitating me saying, “More blood, more blood,” because I really wanted everyone to see what it’s like to die from a botched abortion. 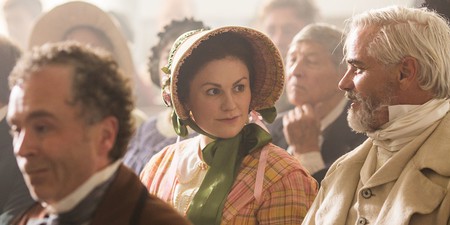 Anna Paquin as Nancy and Paul Gross as Kinnear | © Netflix

CT: There’s an ominous evening scene that shows Grace sitting on the porch with Nancy while McDermott is balancing himself on the fence nearby. Everyone’s seemingly content. But then Grace detects that there’s something malignant about the house, that springs from Kinnear, because he’s corrupt. It’s quite Gothic.

MH: Yes. Grace, being a puritanical Northern Irish girl, would see Kinnear’s relationship with Nancy as corrupt because it’s sexual, but really it’s corrupt because Nancy’s being used. There’s tragedy coming whichever way you look at it.

I like the way Margaret Atwood brought in the Victorian novel and all different kinds of Victorian melodrama—a murder, a young women ruined. You think Simon’s the dashing hero, but he’s not. Grace is the young heroine, yet is she? It has all the elements of a classic mystery, yet who’s innocent and who’s guilty isn’t clear. I’m ready for people to see it.

Alias Grace is streaming on Netflix.