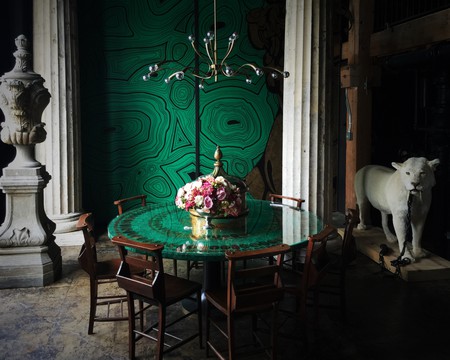 In an spellbinding design book penned by interior guru to the stars, Ken Fulk gives readers a glimpse into his whimsical world of texture, color, wit and whimsy. The next wave in interior design has definitively arrived, and he may just be it. 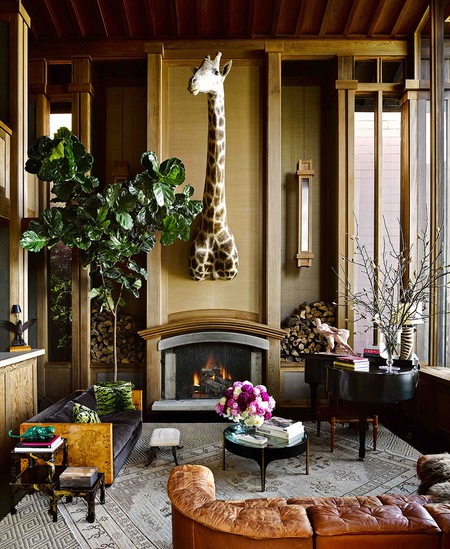 It’s not often that interior design stirs the senses in such a powerful way. Simply looking at photographs of his work creates a sort of excitement that is welcomed relief from the monotonous “greiges” we’ve been seeing for several years now, especially in luxury markets and urban spaces.

His factory warehouse studio in San Francisco, called Magic Factory, functions as his work/live space – yet another example of how the professional and personal continue to merge in creative industries. When it comes to his layered designs, the juxtaposition of the primal and elegant, mixed with assortments of treasures, simultaneously shocks and calms the mind. 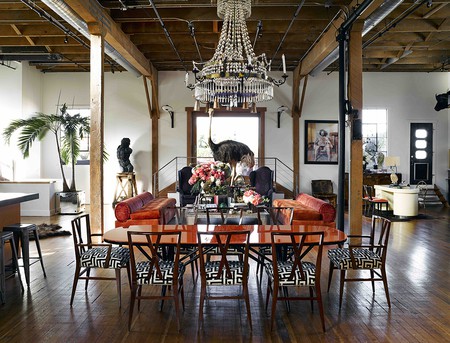 A glass chandelier juxtaposed with an ostrich in this sleek, modern dining area. Designs by Ken Fulk. Image | © Ken Fulks

One room – The Peep Show tableau inside his Magic Factory – features an all-white taxidermy peacock, animal skin print, crystal chandeliers, a wall of chopped firewood, and large bouquets of luscious pink and white roses. That’s a lot of texture and emotion happening in one room. What seems contradictory or even disparate somehow works, with each accent acting as a complementary companion in a seductive dance of objects. 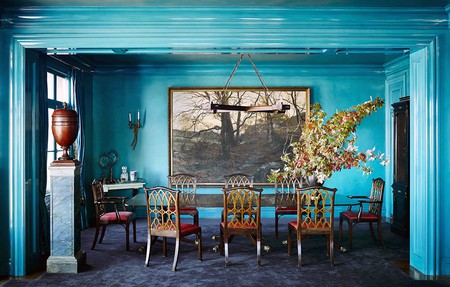 Inside one of the most expensive single-family homes ever recorded in San Francisco, Birch Castle—the abode of social media entrepreneurs-turned-multimillionaires—Fulk didn’t leave an inch of the house untouched. “The living room was lacquered with twenty coats of pea-cock blue and then burnished to a soft glow. The formal mahogany library was converted to a more vibrant, open shared workspace with an enormous French industrial table to serve as a communal desk that needed to be lifted by a crane through the window,” Fulk pens in his book Mr. Ken Fulk’s Magical World.

“What had been a very formal house was now an intriguing mix—part English manor, part rock-star lair—filled with wit and whimsy,” he says of the final design for Birch Castle.

“To me life has always had a cinematic quality, as if a troupe of elaborately costumed dancers might make an entrance at any moment. Frankly it’s been this way since I was a child. I was the self-anointed creator of experiences for my family from the beginning. No dinner could pass without the table being prepared just so—flowers arranged, place settings perfected, name cards displayed,” Fulk says. 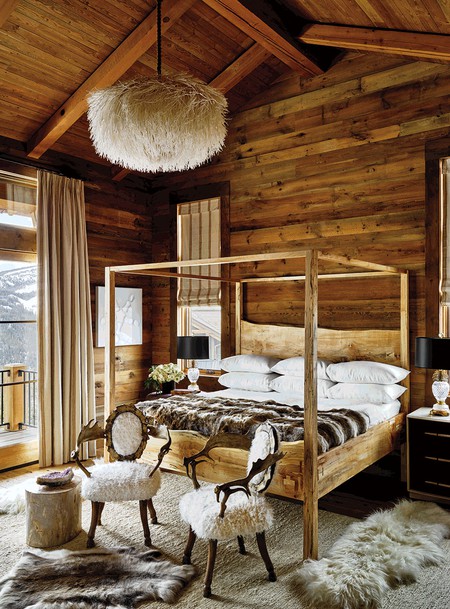 The use of reclaimed and antique items is also a common trend in his work. In a Montana lodge called the Halfway House, Fulk used “Wood salvaged from snow fences and old barns” to cover the interior walls and floors. “The sparseness and texture they provided gave the structure a spiritual quality,” he writes. He also used antlers as both wall and table décor, mixed leather and velvet chairs together in the same room, and used antique antler chairs to outfit the master bedroom.

“Ken can get up at dawn to shop the farmer’s market with a designer’s eye toward color and texture, then (without needing a nap) hit a massive flea market with equal zeal,” Cornelia Guest comments in the book’s introduction. 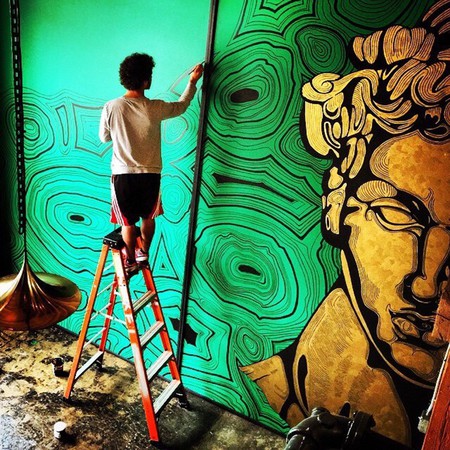 His use of green is also noteworthy. Pantone’s Color of the Year is ‘Greenery’, and it seems Fulk was already on that trend long before the official announcement in December. Vibrant pops of emerald green can be found in so much of his interior designs, and the color’s proximity to grays, reds, and black in surrounding objects awakens the senses.

“It’s no coincidence that I often describe our projects as ‘movies in my mind.’ I literally see them come to life—not just static spaces with pretty furnishings but glorious, vivid, Technicolor movies complete with a soundtrack, the perfect costumes, and intriguing characters,” he explains. Ultimately, Fulk’s work is an extravagant departure from the monotony of minimalism through color (and a lot of it), fantasy, and yes, sensuality.