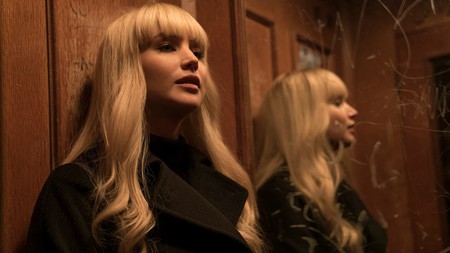 The star swings back into action as a deadly Russian spy. But is the abuse meted out to her character too much for the current climate?

Did I, Tonya (2017) stick to the known knowns too closely? Imagine that Nancy Kerrigan had decided to get revenge on Tonya Harding’s crew and that Kerrigan had been played by Jennifer Lawrence opposite Margot Robbie. She would have stormed into the room where Harding and Jeff Gillooly were making their 1994 sex tape and beaten both unconscious.

This is how Lawrence’s prima ballerina, Dominika Egorova, responds to being assaulted by her male partner on stage at the Bolshoi Ballet in Francis Lawrence’s thriller, Red Sparrow. Her career destroyed, Dominika slips into the sauna where her attacker and her Bolshoi replacement, Sonya (rhymes with Tonya), are coupling, and bludgeons them until they are motionless.

It looks as if Dominika has killed the pair, but her weaselly uncle, Ivan Egorov (Matthias Schoenaerts), tells her that she only broke one of Sonya’s toes. He is impressed by her ferocity. No one should mess with Dominika.

Ivan is the deputy director of the SVR, the Russian intelligence agency tasked with operations outside the Russian Federation. He has a sinister hold over Dominika—usually shot from a low angle when he’s next to her. Because she is out of work and needs money to care for her sick mother (Joely Richardson), she reluctantly agrees to Ivan’s suggestion that she become a spy.

Based on the novel by Jason Matthews, Red Sparrow is a subpar John le Carré knockoff. Frequently ludicrous, it is a powerful vehicle, nonetheless, for Lawrence as an unbreakable woman. Her hair becoming ever blonder, Lawrence makes a convincingly tough and unflinching Slav. She attempts a light Russian accent, and it is better than the accents adopted by Jeremy Irons and Ciarán Hinds, who pleasingly play the SVR brass. 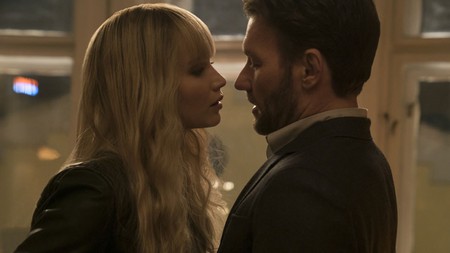 In one of her rare vulnerable moments, Dominika gets romantically entangled with Nate Nash (Joel Edgerton), a maverick CIA operative stationed in Budapest. Edgerton is fine in a role that may have been inspired by the loose cannon Ricki Tarr in le Carre’s Tinker Tailor Soldier Spy (1974).

Unfortunately, Nate resembles a fitter-looking but humorless Ricky Gervais. There’s more fun to be had watching Mary-Louise Parker, hilarious as a drunken, treacherous American official who hawks a satellite defense system, its codes stored on floppy disks, to Dominique and her greasy handler (Douglas Hodge) in London.

For Putin and Country

Dominika’s training as a spy is more absorbing than her convoluted and credibility-testing adventures in the field. It involves her going to “whore school,” as she later puts it. This mixed-sex academy in the countryside is where Dominika is taught to set aside her emotions and—for Putin and Country—become a deadly seductress, a kind of post-modern Mata Hari. 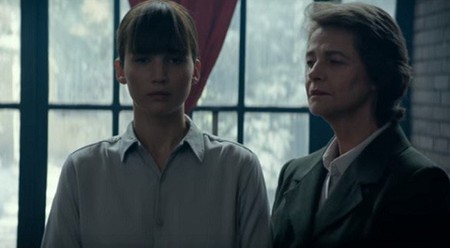 Her unbending instructress is played by Charlotte Rampling, whose deadpan performance, reminiscent of her turn in Never Let Me Go (2010), transcends some of the most absurd dialogue Rampling has ever had to speak. It is Rampling’s Matron, who, with a cold glitter in her eyes, presides over the class in which the stark naked Dominika parts her legs and demands of an arrogant male student, “Well, are you going to f__k me?”

It is a testament to Lawrence’s aplomb that she is not remotely demeaned by this scene nor one in which she is raped by a mobster who is still inside her when he is garroted by an SVA assassin.

It may occur to the audience that Dominika’s job requires her to be sexually harassed and abused on a regular basis. When suspected of becoming a double agent, she is water-tortured and beaten by the KGB. When it appears she has become a triple agent and comes in for more punishment, it becomes a little hard to suspend disbelief.

Though the temple of Dominika’s body is desecrated, her mind is unimpaired. The individual viewer has to decide if the second major revenge she seeks in the film will compensate for the physical maulings and abuses she endures. Indomitable though Dominika is, thanks to Lawrence’ steely resolve, the parents of the star’s innumerable young fans might want to delay them seeing her latest heroine being brutalized.