If You Love Travel, Release Your Inner Gertrude Bell

Watching Letters From Baghdad is scarcely safe. The mesmerizing new documentary about Gertrude Bell is one of those films that might make the desk-bound and restless stock up on salt pills and head for the nearest desert.

Browsing an antiques market while Christmas shopping in Hitchin, England, a few years ago, I found a cheaply framed reproduction of a lithograph. Scrawled on its bottom right-hand corner were the words, “Lower end of the valley showing the Acropolis, Petra.” The original was painted by the Scottish orientalist artist David Roberts and signed March 9, 1839.

The picture shows a group of guards in striped djellabas standing near the ruins of some of the rock-cut buildings in Petra in southern Jordan. Between the 4th and 6th centuries, Byzantine architects recycled these monolithic structures from Nabataean classical monuments and their Roman additions.

Roberts’ painting made me wonder what had gone on there. What biblical dramas had occurred within the hollowed-out rooms in the great edifice?

The Acropolis is the comparatively small building, turreted by time, in the foreground of Roberts’ painting (below). It’s known as the Palace of Pharaoh’s Daughter, though it may have been a Nabataean temple. 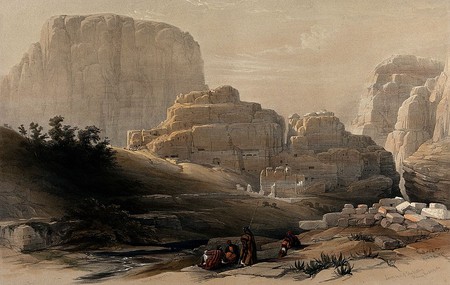 I left the print in the store, but it nagged at me. I returned seven months later, hoping Hitchin’s shoppers had ignored it. I got lucky, and handed the vendor £12 (US$15.50). The print now sits on a shelf in my family’s Brooklyn apartment demanding that I visit Petra and see its architectural splendors in person. This is not an unusual ambition. Petra has received up to 8,000 visitors a day, though figures have fallen radically since the global financial crisis and the Arab Spring.

Fresh inspiration for seeing Petra has come from Gertrude Bell (1868–1926), the intrepid English explorer, archaeologist, photographer, writer, and political officer whose story is told in Sabine Krayenbühl and Zeva Oelbaum’s richly atmospheric documentary Letters From Baghdad. Bell is most famous now as a nation builder—one of the creators of Iraq. In 1920, she stage-managed the election of the Hashemite king Faisal I, even attending to his household.

Drawing on Bell’s correspondence, much of it with her widowed father, the documentary weaves newly mined archival footage and photographs with interviews with Bell’s contemporaries (played by actors directly addressing the camera); some of the footage is staggering. Bell herself is voiced by Tilda Swinton—a dream pairing that makes one yearn to see Swinton in the role. 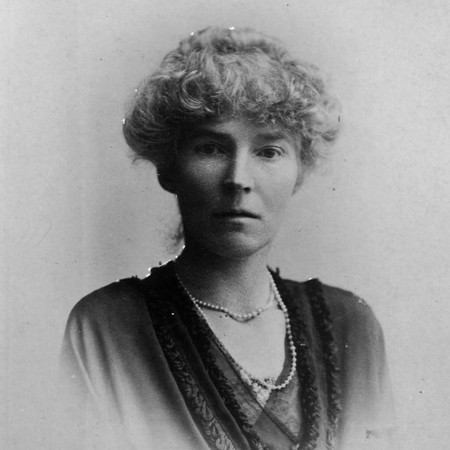 After getting a first-class degree in modern history at Oxford, Bell had traveled to Persia in May 1892 to visit an uncle, Sir Frank Lascelles, who was a minister (ambassador) stationed in Tehran. She fell in love with the region and would eventually become the Arabist who helped shape its destiny more than any other woman.

Bell first visited Petra toward the end of her 1900 desert tour. She and her caravan stopped one night near an encampment of the Beni Sakhr, the dangerous tribe that had been the last to submit to Turkish rule. Bell and her men had used up their provisions and had to scrounge for food. There are hints that she was cavalier about her safety, possibly the psychological residue of losing her mother when she was three. 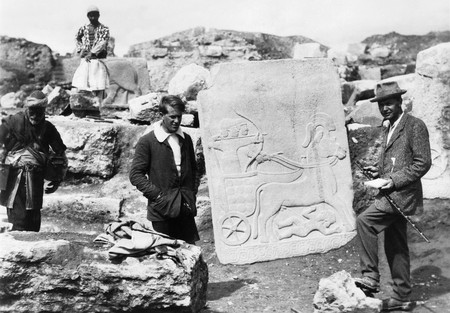 T.E. Lawrence (center) and Leonard Woolley with a Hittite slab at the Carchemish excavation, 1913 or 1914 | WikiCommons

In Werner Herzog’s recent Queen of the Desert (2015), Bell (played by Nicole Kidman) first meets T.E. Lawrence (Robert Pattinson), the future Lawrence of Arabia, at the Petra excavation. In reality, Bell met Lawrence at a dig at Carchemish on the border between modern Turkey and Syria in 1911; ever the pioneer, she had visited the site two years previously, before the archaeologists moved in, when she was crossing northern Syria on her initial trek into Mesopotamia.

Lawrence later disparaged Bell’s role in the creation of Iraq: “That Irak [sic] state is a fine monument; even if it only lasts a few more years, as I often fear and sometimes hope. It seems such a very doubtful benefit—government—to give a people who have long done without.” He also said of her, “She was a wonderful person, not very like a woman.”

Since they are played by Kidman and Pattinson, Bell and Lawrence must flirt. “Could you please not marry me?” T.E. raffishly asks Miss Bell at Petra. He’s referring presumably to his (alleged) homosexuality, or asexuality. Pattinson was woefully miscast. Kidman is game, but her Bell is glamorized and overly charismatic, and reductively the object of smitten men played by James Franco and Damian Lewis. An impatient romantic, she pales beside the manic adventurers played by Klaus Kinski in Herzog’s Aguirre, Wrath of God (1972) and Fitzcarraldo (1982).

“The deeper I penetrate this mysterious labyrinth, the more I become to know myself,” she says to herself as she and her guide Fattuh (Jay Abdo) pass through Jordan’s Wadi Mujib gorge, but it was surely the wrong place for Herzog to make her sound so self-conscious. 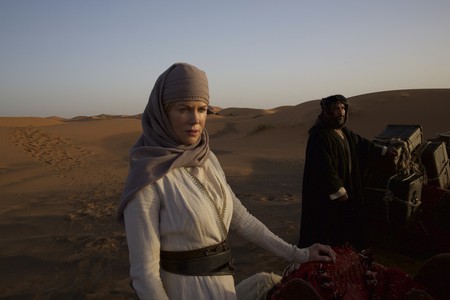 Nicole Kidman in Queen of the Desert | © IFC Films

Actor Eric Loscheider, who plays Lawrence, is no Peter O’Toole (or Robert Pattinson), but he does look like the original and, in character, gives an amusingly snooty and sexist account of how he and his fellow archaeologist R.C. Thompson repaid their visitor after she imperiously criticized their “prehistoric” digging methods. After first dismissing her looks, Lawrence recalls how he and Thompson attempted to “squash her” with an arrogant display of erudition and then grilled her on what she’d learned.

“She was quite glad to have tea–after an hour and a half,” Lawrence says. “It would have been most annoying if she’d denounced our methods in print.” Bell and Lawrence’s English oneupmanship rings truer than Queen of the Desert‘s flirting in the ruins. One suspects the lady remained un-squashed by the archaeologists.

More important, she wasn’t fazed by the Ottomans, who began to look on her travels in Mesopotamia with suspicion and regard her as a spy. “I’ve become a person in Syria,” she observed, almost proudly. She goes on to predict the Ottoman Empire’s collapse. 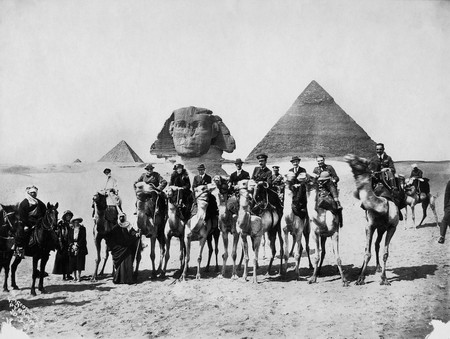 The documentary doesn’t neglect Bell’s romantic life. She exchanged passionate letters with Charles Doughty-Wylie, the British consul she met in Konya, Anatolia, but could not induce him to leave his wife.

After his death at Gallipoli in 1915, Bell’s half-sister Lady Molly Trevelyan (Lucy Robinson) told her diary, “It is difficult to see how she can build up anything out of the ruins left to her. Hers is not a happy nor a kindly nature. Sorrow has dried up all the springs of kindliness.”

“No thoughts are bearable,” Bell later wrote to her father from Baghdad. Again, one wishes to see Swinton play the part in the flesh.

It would be neither wise nor ethical for a modern Westerner to explore many of the places in the Middle East that Bell did. She was lucky that her life coincided with the late Victorian and early Edwardian age of adventure—and its spirit—when so much of antiquity was being discovered.

She was luckier still to have unquenchable curiosity and contempt for preconceptions about a woman’s capacity for grueling travel. Who now, woman or man, wouldn’t want some of Gertrude Bell’s fearlessness?

Letters From Baghdad is showing at the Angelika Film Center and the Lincoln Plaza Cinema in New York.