How to Lose Your Child in Putin's Russia

Loveless depicts a Russia where family values and social propriety have gone south—into the maw of smartphone obsessiveness and all that it symbolizes about capitalistic enslavement.

Here are a few examples. At a fancy restaurant, an unseen man tells a dolled-up woman in her mid-20s, who is returning to her table from the ladies’ cloakroom, that he wants her cell phone number and her name. She gives them to him as casually as if she were telling him the time, then strokes the head of the man at her table as she sits down with him to resume their dinner. 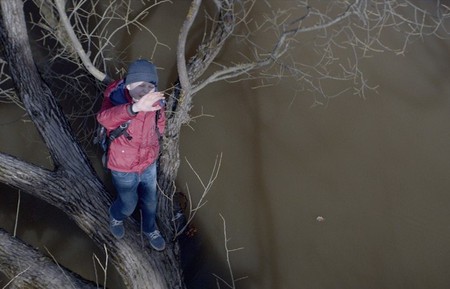 This moment, which has no direct bearing on the main story, implies the woman is an escort who, in a day or two, will be having paid sex with the unseen man, maybe after he’s brought her to the same restaurant. Why not? Vladimir Putin’s Russia is a market economy and everyone is for sale.

In the same restaurant on the same night, one of the attractive young middle-class women loudly partying with her girlfriends proclaims, “Let’s make a selfie—here’s to love and selfies!” They pose for the shot, beaming on command.

Loveless director and co-writer Andrey Zvyagintsev may not be criticizing the fact that grown-up girls just wanna have fun, but he is questioning their sheepish and inane technological mediation of their smiles (which are are as fake as the propagandistic news piped on car radios in the film). It is their ignorance of the economic imperialism to which they are in thrall that he deplores.

Also in the restaurant is Zhenya (Maryana Spivak), a sleekly turned-out married woman in her early to mid-30s. She looks up from the smartphone to which she is always glued to bask in her wealthy 47-year-old lover’s adoration and play footsie with his crotch under the table. 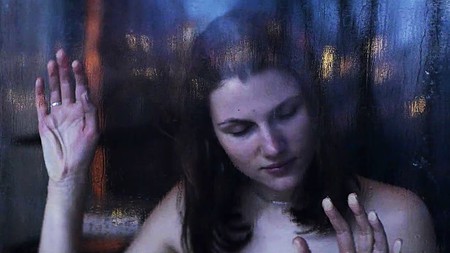 The context for all this narcissism and unconscious commercial servitude is a desperate decision made by Alyosha (Matvey Novikov), Zhenya’s 12-year-old son.

While Zhenya is having postprandial sex with her lover at his swish pad, around the same time her hated husband Boris (Aleksey Rozin), Alyosha’s father, is having passionate sex with his pregnant girlfriend at her mother’s flat, Alyosha is leaving home, never to return. Returning to their flat at dawn, Zhenya doesn’t even bother to look in Alyosha’s room to see if he is there.

Zhenya didn’t love Boris when they married just before Alyosha’s birth. After a few years of humdrum cohabitation, they grew to loathe each other. Having found new partners, they are anxious to sell the flat—which is in an unnamed city three hours from Moscow—and start their lives anew.

Fly in the ointment

Boris is especially anxious to marry again because his Christian boss will fire him from his office-drone job if he becomes single. At one point, the vitriolic Zhenya confesses to the beauty technician giving her a bikini wax that she hopes, indeed, that Boris will be fired. Zvyagintsev punishes Zhenya for her spite by making her depilation painful.

For both Zhenya and Boris, the fly in the ointment is their son. Alyosha is apparently a sweet, quiet, studious boy who touchingly has a toy robot and a cardboard soccer ball pinned to his bedroom wall. (The clueless Zhenya thinks he doesn’t like sports.) Possibly a little withdrawn—he has just one friend—Alyosha has none of the feral fury or survival instincts of the paternally abandoned 11-year-old Cyril in Jean-Pierre and Luc Dardenne‘s analogous The Kid With a Bike (2011). 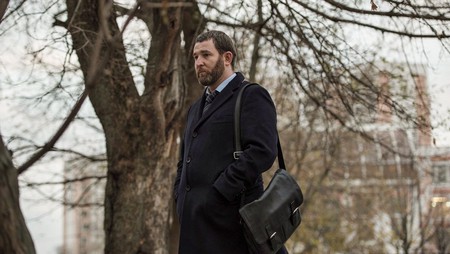 Early in Loveless, Zhenya goes for a pee after she and Boris have had a blazing row, during which both admitted they do not want Alyosha. After she leaves and shuts the bathroom door, Alyosha is revealed standing behind it. He has heard everything. His face is crumpled in agony and he is silently weeping: it is the most excruciating shot in the film.

A tense search for the missing Alyosha, organized not by the uncaring police but by a dynamic volunteer service, drives the second half of the film. Much of it is set in the liminal space between city and country that is the domain of the unwanted. Bent and buckled trees hang over the river that runs through this threatening no man’s land.

The benighted terrain, a backdrop for Zvyagintsev’s condemnation of Russian society, could be the director’s equivalent of the “Zone” in Andrei Tarkovsky’s Stalker (1979). The searchers come across a deserted hotel, recently built, that is already rotting away. Emblematic of futile business speculation, it is like the skeleton of the beached whale that symbolizes Putin’s Russia in Zvyagintsev’s Leviathan (2014).

Zvyagintsev has previously shown his sympathy for neglected or cast-off children in The Return (2003), The Banishment (2007), and Leviathan. He demonstrated it, too, in his short film Apocrypha, his contribution to the anthology film New York, I Love You (2008); it was excluded from the theatrical release version but appears on the DVD.

The allegorical proposition in Loveless is that commercial excess, sybaritic self-indulgence, and greed are costing the Russian people the ability to act humanely and with community spirit, even to nurture and protect their young. Zhenya and Boris, almost freakish in their cruelty and selfishness, are presumably atypical.

Zhenya’s love for her nouveau-riche boyfriend, expressed in faux-erotic terms, may be genuine, but it is obvious she would not be with him if he were not independently rich. Boris’s love for his girlfriend also seems genuine, yet marrying her means he will keep his precious job. Alyosha is simply expendable, the collateral damage of post-Soviet evolution—and degeneration. Where does he go? Don’t expect an Oliver Twist-like ending.

Loveless opens in the US on Friday, February 16.