"Glamorizing Anorexia" Is a Non-Issue in "To the Bone"

Fears that Marti Noxon’s To the Bone would glamorize eating disorders are unfounded. Thanks to Lily Collins’ unflinching performance, it sympathetically illuminates the anguish of people terrified of gaining weight.

The unhelpful reputation the Netflix film gained initially for making anorexia nervosa and bulimia seem attractive was a knock-on effect from the reaction that greeted the 13 Reasons Why “teen suicide” series. It couldn’t have helped that, in preparing for her lead role, Collins slimmed enough to make her character convincingly sickly without effacing her prettiness. 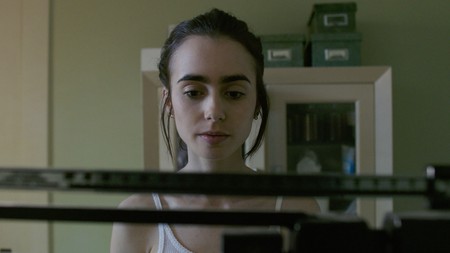 Life on the scales: Lily Collins in To the Bone | Netflix

The glamorization accusers neglect the way the film confronts head-on the issue of mediating images of anorexia that provide “thinspiration.” Collins’s Ellen is a talented 20-year-old artist who posted her sardonic anorexia-themed drawings on her Tumblr account. A follower who became obsessed with these images committed suicide. Her parents vengefully sent Ellen photos of their dead daughter. 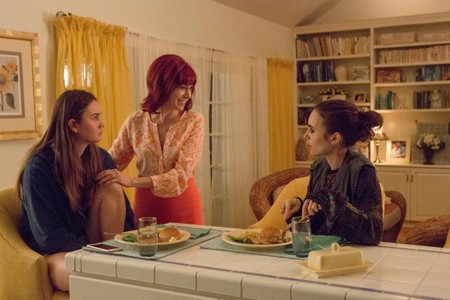 Another of Ellen’s Tumblr followers, Luke, has pinned a print-out of one of her illustrations on his wall and says it triggered his feelings for her two years before they met—the film emphasizing its anxiety about the influence of images. It is never implied, however, that Ellen’s artwork distorts anorectic thinness into morbid chic.

If To the Bone stops short of showing the full horror that anorexia nervosa can wreak, it lays bare the misery, dread and degradation sufferers endure. Above all, Ellen and the other patients reveal their often wryly funny appreciation of the conflict threatening their lives.

They hope, for example, that the mystery day trip announced by Beckham won’t be to the Los Angeles Museum of the Holocaust, in case it fills them with guilt over their self-induced emaciation. Though these kids are compelled to dice with death, they are not in denial: they understand why they are addicted to not digesting their food, but believe they are powerless to do anything about it. 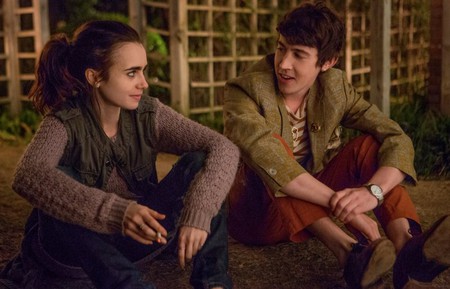 Hazarding love: Lily Collins and Luke Sharp in To the Bone | © Netflix

Herself a recoverer from anorexia, first-time film director Noxon uses details skilfully. Frail Pearl (Maya Eshet), who has to be fed through a tube, has regressed into a near-babyfied existence; it’s unsurprising she’s the girl who lobbies for a dangerously pregnant fellow patient (Leslie Bibb) to have a baby shower.

Ellen’s cheerful roommate Anna (Kathryn Prescott) hides a bag under her bed. When Ellen secretly investigates—perhaps expecting a stash of chocolate bars like those similarly hidden, gorged on, and purged by Jane Horrocks’s bulimic Nicola in Life Is Sweet (1990)—she recoils: it is a barf bag. How can that glamorous?

Collins, who included a chapter about her own past eating disorders in her recently published memoir, is a beguiling talent: refined in her expressions and body language, quietly charismatic, never showy: she leaves a powerful impression of a highly intelligent, sensitive woman not fully formed, irrespective of her illness. 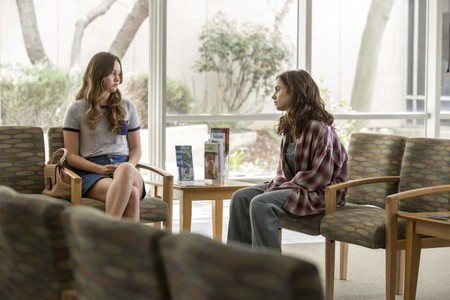 Sistering: Liana Liberato and Lily Collins in To the Bone | © Netflix

Ellen might have been a late bloomer anyway, but is blocked. We learn why. Having fallen in love with this “Manic Pixie Un-Dream Girl,” Luke is determined to provoke her recovery. As the intimacy between them grows, he gently inquires if she has been sexually molested. She doesn’t know how to answer, a sure sign Luke’s hunch is justified.

Noxon doesn’t divulge who the perpetrator was, but there is an awful possibility. Like films as diverse as Sense and Sensibility (1995) and Archipelago (2010), To the Bone is structured by the absence of a father. Ellen’s dad neither comes to her preliminary meeting with Dr. Beckham, sees her off to L.A., or visits her; Susan weakly explains that he’s too busy at work. (He is not in the film, in fact.) His abandonment of Ellen hints—though only hints—at his culpability for her neurosis.

The family member most unguarded in her love for Ellen is her half-sister Kelly (Liana Liberato), who is truculent but frank and forgiving. Ellen’s birth mother Judy (Lily Taylor) arrives at Threshold all in a flap and gets into a squabble during a group session with bitchy Susan; Judy’s hard-edged partner Olive (Brooke Smith) is unmoved by Ellen’s plight.

Unfortunately, the film’s third act, in which Ellen (now called Eli) absconds from Threshold—and crosses a threshold into a different consciousness—overreaches visually as it lurches toward an emotionally unsatisfying conclusion.

Turning up at Judy and Olive’s home, Eli intuitively takes a step toward recovery. Judy, admitting she was unable to love Ellen as a baby, provides the succor. The climactic scene is icky, though that doesn’t mean it’s untruthful.

Premiered at the Sundance Film Festival, To the Bone is a television movie at heart—think Girl, Interrupted lite. Reeves, miscast as Beckham, is wooden, but Alanna Ubach, as his precise head therapist, and Retta, as the tough orderly, are reassuring presences in Threshold’s twilight zone.

It’s the mesmerizing Collins, though, who holds the film together and makes it one of Netflix’s most urgent. If you’re a teenager, or have got teenage relatives, it’s a must-see.

To the Bone is streaming on Netflix.