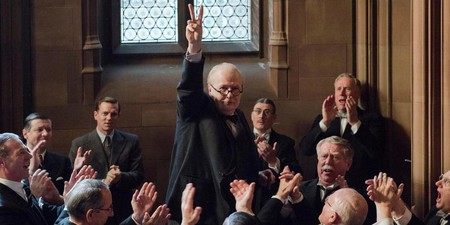 Darkest Hour depicts the moment in May 1940 when Britain stood on the brink of capitulation to Nazi Germany. Like this summer’s Dunkirk, it’s a stirring but flawed World War II film. Here are its major pros and cons. 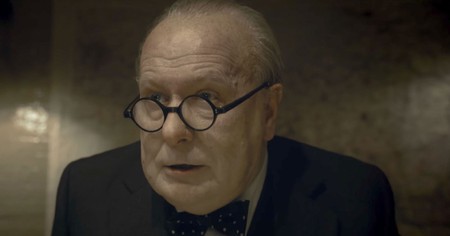 Darkest Hour‘s Churchill is, by some distance, the cinema’s finest. First, Oldman captured the exact look of the 65-year-old Prime Minister in May 1940—a feat of prosthetics and makeup—as well as his posture, facial expressions, and body language. More important, he caught precisely Churchill’s bluster, irritability, and bulldog spirit, which flags only in private moments of doubt or unexpected tenderness. If Oldman doesn’t win the Best Actor Oscar for this performance, he will wonder what he has to do.

Darkest Hour has only a few domestic scenes. They give Scott Thomas little room to develop the role of Clementine (Clemmie) Churchill, beyond that of the consoling, confidence-boosting maternal wife figure. Anthony McCarten’s screenplay gives her no inner life. 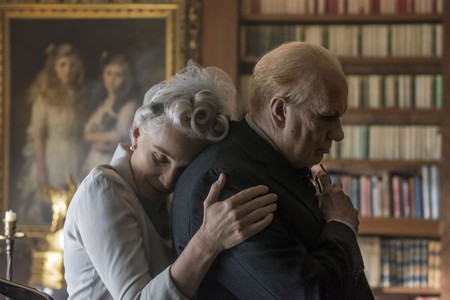 Churchill had become Prime Minister of Britain’s coalition government on May 10, 1940. Due to his reputation for recklessness and past political disloyalty, he was by no means a popular choice in Whitehall. The anti-Churchill sentiment in the film is neatly symbolized by the wariness of Neville Chamberlain (Ronald Pickup), who had relinquished leadership thanks to a vote of no confidence, and Viscount Halifax (Stephen Dillane), the government’s quietly combative Foreign Secretary, both appeasers. King George VI (Ben Mendelsohn), a friend of Halifax, is also disdainful of Churchill. Their opposition to Churchill’s fight-on-at-all-costs agenda is the film’s central conflict, not the war against Hitler.

The secretary’s story is underwhelming

Churchill is frequently glimpsed through the eyes of Elizabeth Layton (Lily James), the pretty secretary whom he bawls out during their first meeting. (In reality, Layton didn’t join him until May 1941.) Gradually she overcomes her nerves and grows to revere him. She elicits Churchill’s sympathy when she tells him of a personal tragedy, but her role as the witness to the protagonist mainly exists to give young female audience members a character to root for. This feels a little patronizing, though James’s performance is appealing. 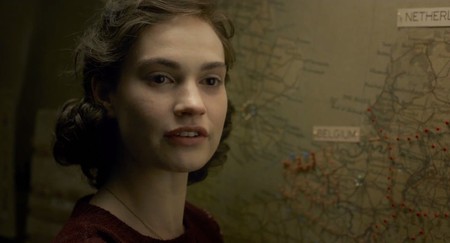 Increasingly bad news of the British Expeditionary Force’s plight in Northern France intensifies Churchill’s struggle in diverting German troops to the small British garrison in Calais to provide relief for the soldiers amassing in Dunkirk. Churchill not only has to persuade his generals that this is the right course of action, but has to overcome Halifax, who insists on Britain negotiating with Germany in talks headed by the fascist Italian leader Mussolini. It’s a desperate battle that almost brings about Churchill’s defeat.

The humor is feeble

The film begins jokily in Churchill’s bedroom—the great man beached like a whale and having little patience for the easily cowed newcomer Miss Layton. The humor in the film intermittently undercuts its seriousness. One comic exchange, about Churchill’s “V-for-Victory” gesture, is especially twee. 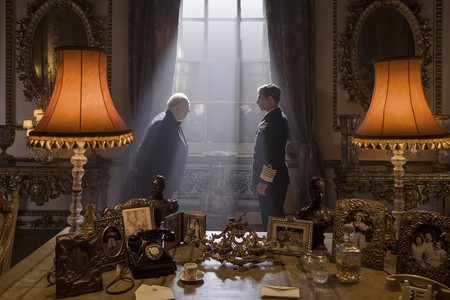 As he did in Pride & Prejudice (2005) and Atonement (2007), Wright proves himself an eloquent visual stylist. Rhyming tracking shots seen from Churchill’s point-of-view capture Londoners going about their daily business despite the threat of invasion. Shots that reach from human height into the sky, or vice versa, embrace the tragedy unfolding in Northern France. These daring camera moves handsomely contextualize Churchill’s mission to keep Britain in the war even as it turns into a conflagration. 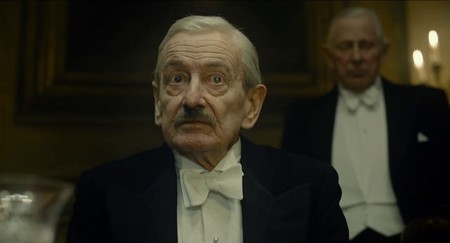 The 71-year-old Chamberlain still enjoyed the respect of Conservative MPs after he stood down as Prime Minister, and he was still influential. He was terminally ill with cancer in May 1940 and would die that November. Beautifully played by 77-year-old Pickup, he is a cautious, watchful man, dutifully playing his part to the end. Look out for the moment when he weighs in on Churchill’s side.

The reports of what the British people were feeling in May 1940 were recorded by the Mass Observation social research organization, which saw the mood changing from secure and defiant (especially in working-class men) to confused, pessimistic, and anxious, if not panicky or resigned to defeat. When Churchill speaks to a cross-section of ordinary Londoners toward the end of the film, their mood is unconvincingly upbeat—notwithstanding they are in the presence of the great optimist.

Unlike Dunkirk, which unfolds on a broad canvas, Darkest Hour is not quite an event movie, but Oldman’s rousing (if not note-for-note) renditions of Churchill’s speeches make clear why he was perceived as Britain’s savior in the crisis that followed the fall of France. Expect to tingle when he starts the “We shall fight on the beaches” speech of June 4, 1940 before the House of Commons. It’s a scene that should prompt someone to make a Battle of Britain movie, if only for Oldman’s Churchill to be recalled to say, “Never in the field of human conflict was so much owed by so many to so few.”

Darkest Hour is in theaters in the US. It opens in the UK on January 12.