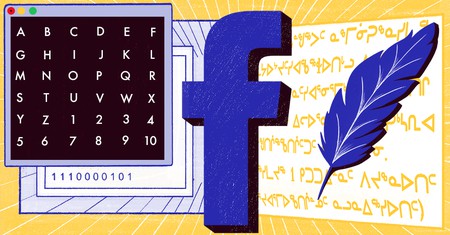 Facebook is expanding its language options to include Inupiaq, an indigenous language traditionally spoken in Northern Alaska; Inuktitut, one of the principal Inuit languages of Canada; and Cherokee, an Iroquoian language spoken by the Cherokee Nation.

Facebook has added Inupiaq – a dialect spoken by some 3,000 people in Northern Alaska and the Seward Peninsula – as a language option on the social networking site. It is also currently working to add Inuktitut and Cherokee, according to Facebook spokeswoman Arielle Argyres.

“It’s important to have these indigenous languages on the internet. Oftentimes they’re nowhere to be found. So much is carried through language – tradition, culture – and so in the digital world, being able to translate from that environment is really important,” says Argyres.

To add a language to the site, Facebook opens a community-driven translation ‘portal’ where users can translate bookmarks, action buttons and other functions through crowdsourcing. The translated words are then confirmed in accordance with crowd up-and-down voting.

In March 2017, Facebook opened an Inupiaq ‘portal’, relying on community translators. In January 2018, the Alaska Humanities Forum awarded a $2,000 mini grant towards hiring two fluent Inupiat translators to speed up the process. While it is still a work in progress, Facebook has publicly launched the language offering on its website.

According to the Associated Press, activists see the addition of Inupiaq to Facebook as a “small step against predictions that Alaska’s Native languages are heading toward extinction under their present rate of decline.”

While there are close to 1.7 million First Nations peoples (the predominant indigenous peoples of Canada south of the Arctic Circle), Inuit (the indigenous peoples in the Arctic area) and Métis (people of mixed indigenous and Euro-American ancestry) living in Canada today, just 260,550 report being able to speak an indigenous language well enough to conduct a conversation.

Language shapes the way we think about, and interact with, the world, and ancestral languages are integral to cultural expression and continuity. The decline of indigenous languages in Canada is a product of the country’s history, including a state-mandated residential school system, under which generations of indigenous children were not permitted to speak their mother tongues.

In the United States – another country where cultural assimilation practices have led to the decline of native languages – there are just 11,000 Cherokee speakers out of more than 300,000 tribal members. UNESCO has officially declared the language to be endangered.

Read on to find out more about how Alaska is saving its native languages from extinction, check out the best spots to explore Cherokee and other native tribes’ culture in the American south east, or read our interview series with a new wave of indigenous writers challenging the face of American literature.