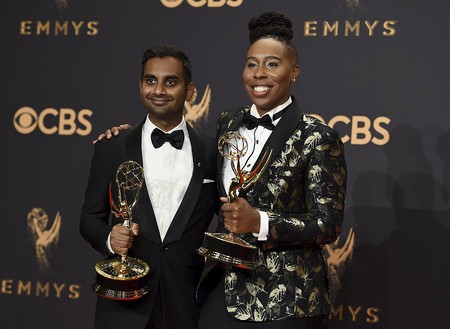 The mood of one half of America was summed up by CBS’s Emmys telecast. The big winners were Saturday Night Live, Big Little Lies, and The Handmaid’s Tale. The big loser was Donald Trump.

Comments from host Stephen Colbert and various presenters echoed this sentiment, though no one went for the jugular. Where is Chris Rock when you need him?

Acknowledging the ham-fistedness of the current administration, the awards even sprang one of the great post-modern moments in recent television history. When former White House press secretary Sean Spicer made an appearance on the show, he wheeled on his own podium, paying tribute to Melissa McCarthy’s SNL spoof of him as a hectoring bully with a sort of mini-armored car. (Spicer’s Emmys parody was reportedly suggested by Colbert.) 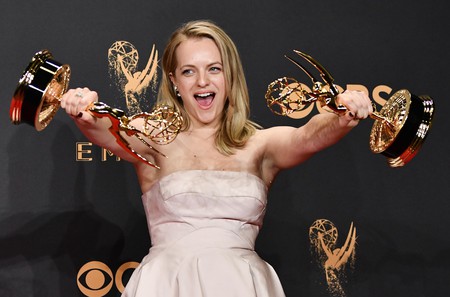 The former Trump spokesman’s mocking of his own inflated rhetoric has not been well received in all quarters, however, given his passive-aggressive contribution to Trump’s embattled Presidency.

The Handmaid’s Tale’s wins—including Best Drama and Best Actress for Elisabeth Moss—are fully merited. As a missile from the zeitgeist, though, the Margaret Atwood adaptation resounds in the context of the President’s unrepentant sexism. Big Little Lies, which addressed domestic abuse and other gender-related issues, was no less disturbing than The Handmaid’s Tale for being set in the world of wealthy white women and their families.

The Emmys were pro-active in recognizing diversity and differences in sexual orientation. Sterling K. Brown of This Is Us became the first black actor to win the Outstanding Lead Actor in a Drama Series since 1998; it wasn’t great that his acceptance speech was rudely cut short. Brown’s performance in The People v. O.J. Simpson had won him last year’s Outstanding Supporting Actor Award in a Limited Series or Movie. 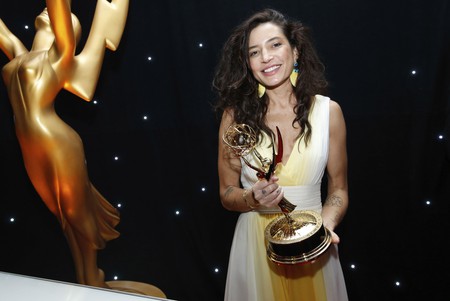 The episode of Netflix’s Black Mirror that won Charlie Brooker’s San Junipero the Emmys for Outstanding Television Movie and Outstanding Writing for a Limited Series hinges on a mixed-race romantic relationship between two women (Gugu Mbatha-Raw and Mackenzie Davis).

Riz Ahmed became the first man of Asian and Muslim descent to win an acting Emmy. He was honored for Outstanding Acting in a Limited Series for his work in HBO’s The Night Of.

“The things that make us different—those are our superpowers,” Waithe said during her emotional acceptance speech.

Here’s a list of the Emmy nominations with the winners marked in bold:

Viola Davis, How to Get Away With Murder
Claire Foy, The Crown
Elisabeth Moss, The Handmaid’s Tale
Keri Russell, The Americans
Evan Rachel Wood, Westworld
Robin Wright, House of Cards

Outstanding supporting actress in a limited series or movie

Outstanding supporting actor in a limited series or movie

Outstanding directing for a comedy series

Outstanding writing for a drama series

Outstanding writing for a comedy series

Outstanding directing for a drama series