Culture Trip chats with director Errol Morris and the invigoratingly unpretentious subject of his latest documentary. The B-Side: Elsa Dorfman’s Portrait Photography is not only an affectionate tribute to a friend, but a poignant elegy for a fading art form.

Errol Morris’s vibrant new film isn’t a true crime investigation like his best-known work The Thin Blue Line or a political biography like The Unknown Known. It’s a study of a singular artist, the 20 by 24 inch Polaroid photographer Elsa Dorfman. In her long career, Dorfman has photographed fellow artists such as Allen Ginsberg, Lawrence Ferlinghetti, Bob Dylan, Faye Dunaway, Julia Child, and Jonathan Richman. No less revealing than Dorfman’s images of celebrities are her thousands of portraits of the non-famous, and those in which she has caught the dignity and bravery of terminal cancer and AIDS patients.

Ginsberg in the buff

It only takes a minute or two of watching and listening to Dorfman in Morris’s film—and only seconds when interviewing her—to glean one reason why her photography is so bracingly truthful (for all her protestations that the camera captures only surfaces). Her natural artistry is complemented by warmth and empathy so pronounced that narcissists and charlatans probably give up the ghost in her company and tacitly admit, “Photograph me, warts and all.” Ginsberg once voluntarily took his clothes off for her; she didn’t need to ask him.

The announcement in June 2016 that the 20 x 24 Studio would cease production of large-format film prompted Dorfman to retire, sort of. While her favored medium appears to be doomed, Dorfman herself clearly has thousands of photographs still to take.

Culture Trip: When did you two meet each other?

Errol Morris: Twenty-five plus years ago. It was shortly after I moved from New York to Cambridge, Massachusetts. My wife saw an ad for a benefit for which Elsa was taking photographs. They were a $100a pop.

Elsa Dorfman: That was a lot of money back then.

CT: And how did the film come about?

EM: It just happened. I’d wanted to do it for a while.

ED: He would casually suggest it, you know, in a big-brother way. “Oh, some day I’m going to make afilm about you.” Like, what else is new? I didn’t take it seriously at all.

CT: Now that large-format Polaroid photography is coming to an end, Elsa, have you truly retired?

ED: It’s really hard to retire emotionally. I still have the lease on my studio. I can’t bring myself to empty it and there’s still Polaroidfilm. So I’ve raised my prices, and if someone calls me, great. Now I’ve just turned 80,I want to take pictures of myself. I think that would be interesting.

EM: You should do it.

ED: Yeah, I’m going to, butit takes organizing. It used to be that I could just walk into my studio and turn on the lights. But now the camera is creaky and I’m creaky. I have to crank it up. I’m at a stage where you’re, like,getting your period for the first time. You know, your mother says when you’re becoming a woman, “She’s at that stage.” The only way to handle the changes when you’re 80 is to say this is a stage. You have very few people to use as examples of how to do it. People like Jane Fonda are no help—they’ve had so much plastic surgery. How does that help you? You look at Gloria Steinem and then you look in the mirror. It doesn’t help at all. You want to kill yourself.

CT: You’re on camera when Errol plays Jonathan Richman’s “Because Her Beauty Is Raw and Wild” in the film, and that makes perfect sense. Your beauty comes out in your presence and your work.

CT: Do you limit yourselfstrictly to Polaroid film?

ED: The iPhone is 10 years old, but Inever really got the hang of digital. I’m thinking I’ll just play around with my Hasselblad, because I love the square image and I still have some two-and-a-quarter-inch film. It’s a bit decayed, but it’s not too bad. The problem is that film has become archaic. You can’t just walk into a camera shop and say, “Develop this film,” because they’ll say, “Oh, we don’t do that anymore.” I could go down to my dark room, but I wonder where I’d buy fresh chemicals? Mygeneration is in a weird warp of technology.

CT: Why do you think you gravitated to Polaroid photography in the first place, rather than using an SLR camera?

ED: Well, for one thing I had a child, and I was afraid I was going to poison the whole house with the chemicals in my dark room. And Iwas really busy and Polaroid was so easy to use.Soit was just plain oldpracticalities.

CT: Does composing photographs come instinctively to you?

ED: I think about it all the time, but I don’t think I can analyze it. It’s like being asked, “How did you make this soufflé?” The minute you say, “I do it this way,” the next one flops. You know what I mean? I’d be a failure.

CT: In the film, you talk about what you call Polaroid “tire marks”—the distressed border that makes them so familiar as artefacts. It’s a huge part of their charm. 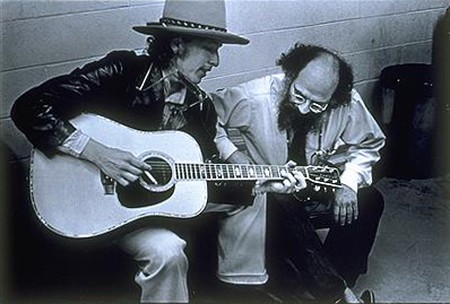 ED: In the first month or two after Polaroid introduced the 20 by 24 inch prints, it had a terrible Kodak complex. It wanted to be able to put a Polaroid picture film side by side with a Kodak picture and say “which Twin has the Toni?” They were obsessed withthose tire marks. There’s no way not to have them, so they matted the photos and covered the tire marks. Since I was a little squirt, I insisted that the tire marks show. Don’t ask me why, but I loved them. I don’t know how I had the nerve. After that, they started to show the tire marks on the 20 by 24s. I always had them on my prints.

CT: It’s the same as wanting to hear the hiss and crackle when you put a needle on a vinyl LP.

ED: Exactly. And the tire marks were different for every camera—mind you, there are only four of them. [A fifth 20 by 24 original Polaroid camera is inactive; two more were built in 2016.]

CT: Allen Ginsberg is the patron saint of The B-Side. Not only was he your friend, but he was clearlysomebody who gave himself to your photos in a very revealing way. Do you regard him asyour greatest subject?

ED: Yes, except for my husband [civil rights lawyer Harvey A. Silverglate]. Allen was amazing.

EM: What about me? 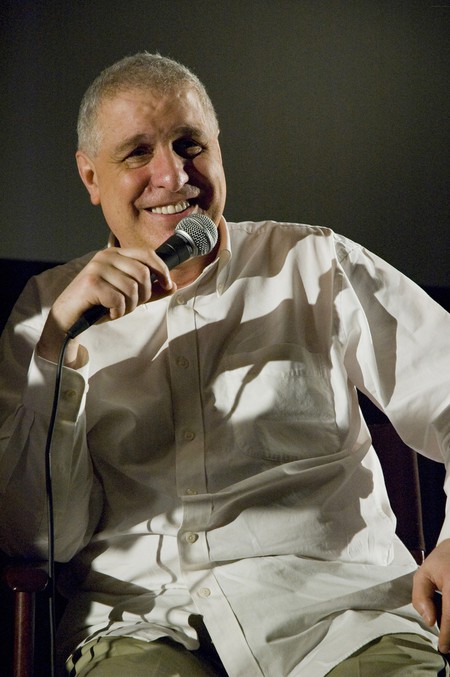 EM: It’s not quite instant, though it does happen in front of you.

ED: Watching an image come up in a tray in a dark room is more magical, I think, than seeing a developed Polaroid for the first time.

EM: Talking of magic, part of the deal is you goto Elsa’s studio, she takes your photograph, and the photograph is pulled out of the camera. It’s cut off andhung up on the wall and you stand there with Elsa watching the photograph emerge.

EM: Many, many times. She’s taken pictures of my wife, my son, myself, all of us together. Our dogs, my mother, my stepfather. We were just talking about a photograph she took ofRobert S. McNamara for the cover of the DVD of The Fog of War,and a really fabulous one she took of Donald Rumsfeld [the subject of The Unknown Known].

CT: You didn’t take one of Joyce McKinney from Errol’s Tabloid, Elsa?

EM: I think Polaroid brought in a kind of different idea of photography. It’s certainly different from thewhole idea of selfies where you take a picture and then share it instantly with people.

ED: I can’t get over the fact that with digital you don’t have a thing—a photo—you can hold in your hand.

CT: Errol, some critics have remarked that The B-Side is very different to your other films.

EM: No, I don’t think it’s different. My wife compared it to Fast, Cheap & Out of Control [1997],which is about time, mortality, the passing of everything. The two films have a lot in common. Fast, Cheap was made right around the time of my mother’s and my step father’s deaths. There is an elegiac element in The B-Side—at least, I hope there is. It’strue of all art in general—and especiallytrue of photography—how easily things are lost or destroyed. Very little was saved from 19th-century photography. Glass plate negatives weren’t saved.

ED: No, they were scraped for the silver.

EM: Or they were used to build greenhouses. There’s a perishability to art thatwe often forget about—a perishability to history in general. I oftenthink of the line in the W.B. Yeats poem “Lapis Lazuli”: “All things fall and are built again.”

CT: But a photograph freezes something for all time…

ED: As long as it lasts.

EM: Elsa has this great line. Photography is “nailing down the now.”

CT: What are your immediate plans, Errol?

EM: I don’t even know how to describe it. It’s my newest attempt at trying to re-create nonfiction. It’s scripted and acted.

ED: My plans are to survive.

EM: And take more pictures. I’m part of that group that won’t let her retire.

The B-Side: Elsa Dorfman’s Portrait Photography is in theaters now.