Pink Pineapples Are Real, But Are They Safe to Eat? 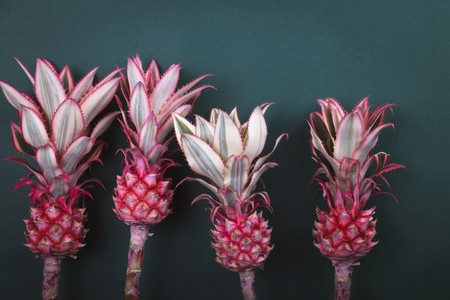 Is there anything more perfectly millennial than a pastel pink pineapple? Now that Del Monte’s beautiful mutant fruits have been given the green light by the U.S. Food & Drug Administration (FDA), it’s only a matter of time before they appear at your local supermarket, but are these genetically modified (GMO) creations healthy and safe to eat?

Del Monte’s scientists added lycopene (the red pigment in tomatoes) to their pineapples through a process of genetic engineering. A simple and seemingly harmless tweak to nature, which gives their produce a pale pink flesh and fuchsia exterior.

Whether or not GMO foods are a danger to health, is the subject of much debate. While Americans and Canadians widely consume products that have been bioengineered, many developed countries, including all of those in the E.U., have banned their sale.

We are so ready for some pink piña coladas 😍 These babies are popping up everywhere – fingers crossed they’ll be in a grocery store near us soon! #pinkisthenewblack #pinkpineapple

The main reason for this distrust comes down to a lack of research. The Non-GMO Project says calls it a “relatively new science” that “creates unstable combinations of plant, animal, bacterial and viral genes that do not occur in nature or through traditional crossbreeding methods”. Although considered by many to be a huge breakthrough, others claim there’s no way to know how these small DNA alternations will affect our health long-term.

In most cases GMO foods have been introduced to the general public with no immediate adverse reactions, but a few landmark cases have been disastrous. In 1996, for example, one biotech company added brazil nut genes to soy bean crops in a bid to make them more nutritionally beneficial. Unfortunately the soy beans also inherited the potentially life-threatening allergy causing properties of the brazil nut.

Back in 1984, a Japanese company added a genetically modified version of the amino acid tryptophan to protein drinks, which had to be recalled after 37 deaths resulting from the disease Eosinophilia Myalgia Syndrome.

In the U.S. the FDA is in charge of testing GMO products before they make it to the store shelves. Anything they approve, including the pink pineapples, has been confirmed by the federal agency as comparably safe and nutritious to its natural counterpart, although there have been cases where these measures have not been one hundred percent foolproof.

You’re probably better off eating organic to be on the safe side, but a pastel fruit salad every now and then shouldn’t do any harm.