A Struggle to Survive Mississippi Racism in 'Mudbound' 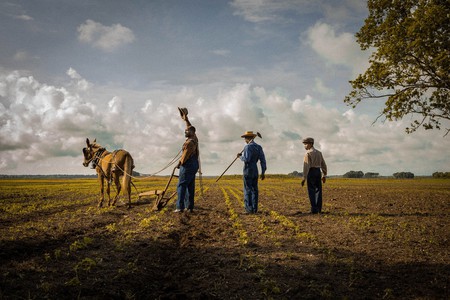 The title of Rees’s impressive film, adapted from Hillary Jordan’s first novel, Mudbound, is all-important. The mud in the Mississippi Delta of the 1940s is a metaphor for adherence or entrapment depending on the individual viewpoints of the people who struggle to make a living from it. 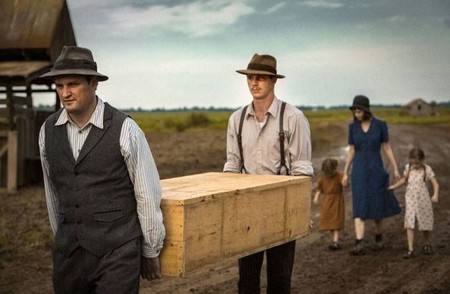 For Henry McAllan (Jason Clarke), a poor white farmer, more dogged than bright, the mud is something to be fought with and conquered; only then can he look upon the countryside as a thing of loveliness.

Henry’s educated wife Laura (Carey Mulligan), whom he plucked from an urban existence, has learned to use a shotgun and accept the constant stream of animal deaths, but she cannot abide dirt and crudeness. Unhappy with her lot and Henry’s lovemaking, she clings to her piano as if it were a last vestige of civilization. Her two little girls have only known the land and have nothing with which to contrast it. 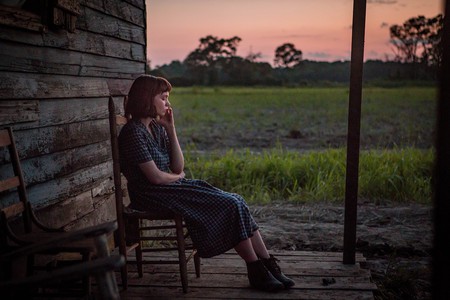 Dashing before the war, Henry’s younger brother Jamie (Garrett Hedlund), a bomber pilot, returned with PTSD and a drinking problem. He cannot reconcile himself to farm life again. Its suffocating hold on him is symbolized by the grave he and Henry dig for their father (Jonathan Banks) during a rainstorm in the opening sequence—Jamie nearly drowns in the mud.

Mudbound (which screened at the New York Film Festival) then proceeds as an extended flashback during which it’s revealed that “Pappy” is not only a malignant racist, but despises Jamie for not knowing how many people he has killed—and for not killing them up-close.

For Hap Jackson (Rob Morgan), the neighboring black share-tenant farmer, the land and its soil is his birthright, something to put his belief in, as he also puts it in the church. Because his forebears worked the land as sharecroppers without any possibility of owning it, Hap is proud to own his own house, tools, and mule. The mule’s death elicits an unnecessarily cruel toll from Henry, who—his father’s son—rents Hap his own mule instead of loaning it to him. 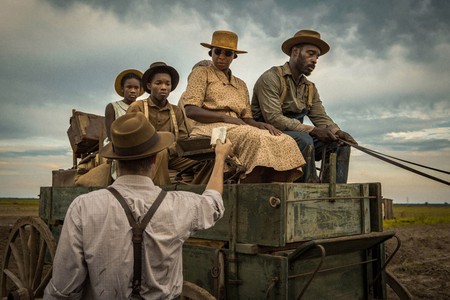 Hap’s wife Florence (quietly played by R&B singer Mary J. Blige) stoically accepts the land and the meager life it affords herself and her kids, though her young daughter Lilly May (Kennedy Derosin) asserts that she herself will escape it by becoming a stenographer. Like Jamie, Lilly’s eldest brother Ronsel (Jason Mitchell) returns traumatized from his war service, as a tank driver in Europe, where he conceived a boy with a German woman he loves. Hap cannot understand Ronsel’s inability to adjust anymore than Henry can accept Jamie’s drunkenness.

In a sense, Mudbound is a film about transgressing social boundaries. After Florence moves into the McAllans’ house for a few days to get Laura and Henry’s daughters through whooping cough, Laura tries to hire Florence as a home help, but the proud Hap won’t agree to the arrangement. To Henry’s chagrin, Laura takes money from their savings to pay a doctor to visit Hap after he breaks his leg. Sadly, the two women are forbidden from making a real connection. 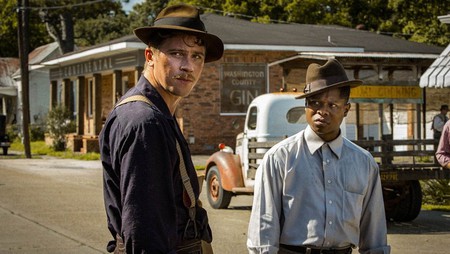 In contrast, the two veterans find solace in a bond, albeit a tenuous one, based on swigging whisky and swapping war stories in an abandoned house. Given the survival of Jim Crow laws and white animosity toward blacks, Ronsel and Jamie’s friendship is clandestine, and it eventually falls foul of Pappy and the Klan, leading to the film’s most horrific scene.

The two young men have stepped out of one war into another one, which, Rees does not need to emphasize, continues to this day. The upshot is that Ronsel and Jamie no longer belong to the place where they were born: Jamie not least because he is a more suitable match for his sister-in-law than her husband.

Jordan’s novel took a leaf from William Faulkner’s As I Lay Dying by using multiple narrators, and Rees’s film follows suit. As Henry, Laura, Jamie, Hap, Florence, and Ronsel speak in turn, reflecting ruefully on their experiences, so the look of the film shifts subtly with them without altering the tone of hardscrabble endurance. Occasionally, the elements or sky will indicate if a character is optimistic or pessimistic—a sunset seen by Laura is more muted than one seen by Henry.

Made for Netflix, Mudbound has a couple of big war scenes and convincingly compressed action in the cockpit of Jamie’s B-52. But Rees—whose Pariah (2011) was the best of her three previous films—sensibly did not strive to make the film a full-scale epic. It’s hard to imagine 1940s Mississippi Delta farm life looking more painterly than this while maintaining the sense that it is spiritually draining. Certainly, it is not a roseate picture.

Except in one instance, the story is not overtly sentimentalized. Rees has been well served in this by her excellent ensemble. Viewers will afterwards recall Ronsel and Jamie’s wry expressions as they talk frankly about women (though without vulgarity); the resignation (but not defeat) of Florence and Laura; and Hap’s throatily rendered, snapped-off words as he considers his heritage or leads his congregation in a prayer that turns to a song.

Mudbound is on release in theaters and is streaming on Netflix.