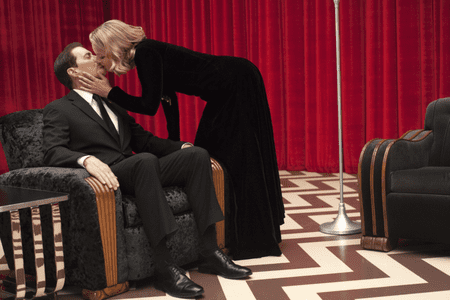 After a hiatus of over 26 years, David Lynch and Mark Frost’s landmark drama series resumed on May 21. Four episodes in, it’s already delivering a recognizably addictive mix of the macabre, the quotidian, the folksy, the soapy, the sick, the surreal, and the downright weird. It may be even better than 1990’s revelatory first season.

Veteran Twin Peaks-watchers know that absorbing the show’s atmosphere is as important as following the plot, which is not as impenetrable as many viewers think, but does require an appreciation of dream logic. Here’s a little TP lore, along with some interpretations and wild guesses about what’s going on—and why.

Lure of the Black Lodge

Possessed by the demonic BOB, Twin Peaks‘ protagonist Dale Cooper (Kyle MacLachlan) has long been trapped in the Black Lodge—essentially, his unconscious mind or “inland empire.” BOB’s occupation of Coop’s conscious mind has turned him into a sleazily attired psychopathic doppelgänger for the straight-arrow, coffee-and-pie loving FBI special agent he once was. In Buckhorn, South Dakota, Evil Coop shoots two women in quick succession, suggesting he has killed many other people.

The Black Lodge takes the form of a labyrinthine interior centering on the sparsely furnished Red Room. It was here, at the time of George H.W. Bush’s presidency, that the murdered Laura Palmer (Sheryl Lee) said to Coop, “I’ll see you in 25 years.” (Lee and MacLachlan are pictured top).

Simultaneously alive and dead in the present, so she says, Laura removes her face (as if she were opening Pandora’s Box) to reveal a white light, replaces it, and leans forward to kiss Coop on the lips. Also in the lodge—a halfway house, perhaps, for tormented spirits—is Laura’s father Leland Palmer (Ray Wise), who, himself an earlier host of BOB than Coop, raped and killed Laura and murdered her cousin Maddy Ferguson and the prostitute Teresa Banks. 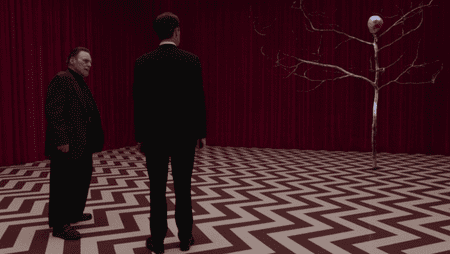 The Black Lodge’s Venus de Medici (in the Red Room) and Venus De Milo (in an adjacent red-curtained passage) were probably suggested by the statue-like female figures in Paul Delvaux’s surrealist paintings. The black and white zig-zag floor was inspired by Masonic lodges’ checkered floors—representing King Solomon’s Temple in the Bible and symbolizing the good and evil checkering of human life; similar floors also appear in the 1951 and 2010 Alice in Wonderland movies and Lynch’s Eraserhead (1977).

As a Native American dwelling, a lodge has special resonance for Tommy “Hawk” Hill (Michael Horse), the Nez Perce deputy chief of the Twin Peaks Sheriff’s Department, who knows that the town’s mysteries are connected to his tribal mythology.

Near Twin Peaks, a red truck heads along a road leading deep into the woods—it’s a reminder of the red fire engine passing through Lumberton in Blue Velvet (1986). The driver parks the truck by the mobile home of Dr. Lawrence Jacoby (Russ Tamblyn) and gives him two large boxes. They might reasonably be expected to contain body parts, but, no, they contain spades.

Jacoby strings up the spades on a kind of Rube Goldberg contraption and proceeds to paint them gold. Formerly a shrink, he numbered Laura Palmer among his clients. That worked out well. What does he want with gold spades? Is he planning a special disinterment? Whose corpse? 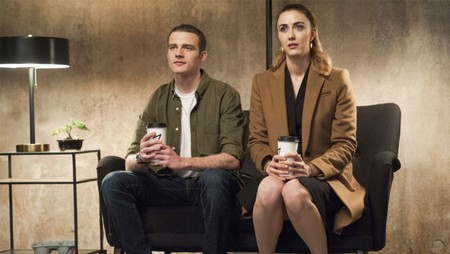 The price of sex

Twentyish Sam (Ben Rosenfield) has been hired by a billionaire to sit on a dais and observe a portal contained in a glass case in a penthouse studio facility high above Manhattan. A security guard outside the room makes sure that Sam doesn’t bring anyone in, but Sam’s inquisitive friend Tracey (Madeline Zima) isn’t going to let that stop her.

Once inside, she strips, naturally distracting Ben from his job, and they start to have sex. As gorgeous as any of the hotties in the first season of Twin Peaks, Sam and Tracey look like they might steam up the whole series. Alas, Lynch has something horrific in store for them. Hadn’t they seen Scream?

Who killed the librarian?

Buckhorn cops make a grisly discovery in a hotel room. Librarian Ruth Davenport, who’d been having an affair with the high-school principal Bill Hastings (Matthew Lillard), has been murdered, though it’s not her body the cops find. Since Bill’s fingerprints are all over the room, he’s jailed as the main suspect. There are echoes here of Fred Madison’s arrest for the murder of his his wife Renee in Lynch’s Lost Highway (1997).

Though there’s a whiff of soap-operatics and a conventional TV procedural about this story strand, it may prove to be the Laura Palmer-like homicide case that drives the show. 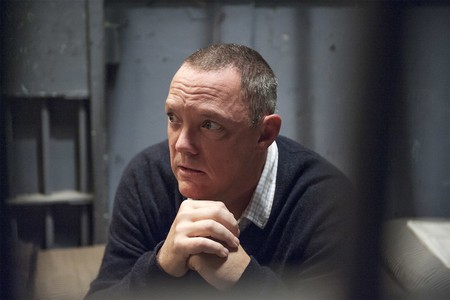 In the Black Lodge, Coop encounters MIKE (Al Strobel), formerly the one-armed traveling shoe salesman Phillip Michael Gerard, who was BOB’s fellow serial killer. His severed arm, previously manifested as the diminutive The Man From Another Place (Michael J. Anderson), has re-materialized as an electrically charged tree-like synapse. That Coop’s unconscious, or his dream-life, contains a man whose arm has been cut off indicates castration anxiety.

So, too, do the gouged eye socket in the head of the murdered Ruth Davenport and the eyeless woman Coop meets in the floating room at the start of episode three. Since all dreamed characters represent the dreamer, it follows that Coop unconsciously fears losing his sight, or blinding himself, as Oedipus blinded himself after killing his father and sleeping with his mother in the myth.

In Freudian theory, the fear of blinding equates to the fear of castration experienced by all little boys who set themselves up as rivals to their dads. BOB, logically, is Coop’s Oedipal father, but who’s the incestuous mother figure? There are plenty of candidates. 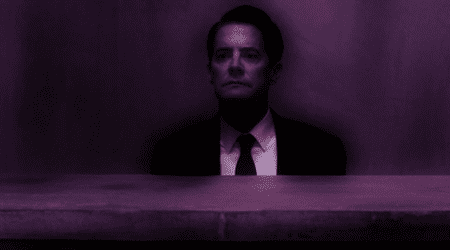 Like Naomi Watts’ character in Mulholland Dr., Coop becomes a sleuth investigating the mystery of his damaged psyche. His investigation begins in earnest inside the room, floating in outer space, where he meets the eyeless woman and another mysterious woman. The sequence in question is one of the eeriest and most brilliantly sustained set-pieces in Lynch’s career.

The blotched purple walls of the room and the H.R. Giger-like machine that’s its focal point conjure memories of Henry’s apartment and other gloomy spaces in the black and white Eraserhead (1977); emerging from a near-catatonic state, Coop is as mystified as the terminally perplexed Henry (Jack Nance).

The tapestry-like storyline of Twin Peaks: The Return (which runs for 18 hours) defies linearity, but it’s clear Coop is slowly jettisoning his doppelgänger. Though one of the floating room women suffers a catastrophe after pulling a lever on the side of the thimble-shaped shed on its roof, it’s a positive omen for Coop. The lever is mirrored by the arms of the slot machines—one-armed bandits—that Coop later plays in the Buckhorn casino, winning jackpot after jackpot.

In psychoanalysis, treasure in the form of emotional equilibrium awaits everyone who resolves their issues. There’s a hint here that Coop is rising above his castration anxiety and various traumas.

Buckhorn people know Coop as Dougie Jones. Unbeknown to himself, Dougie has, it transpires, been living locally for some time—a sign that BOB’s diabolical possession of Coop induced amnesia. 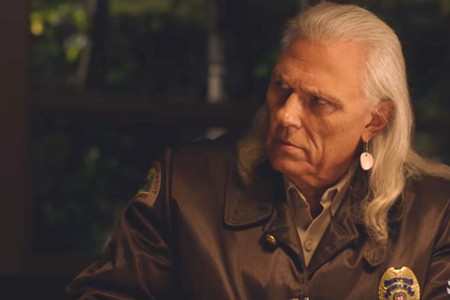 Lucy and the chocolate bunny

Deputy Chief Sheriff Hawk not only has to sift laboriously through records of old investigations, he also has to deal with Twin Peaks’ dimmest bulbs, his office receptionist Lucy Moran (Kimmy Robertson) and her romantic partner Deputy Sheriff Andy Brennan (Harry Goaz), who often resembles Stan Laurel. This pair witter on interminably and illogically, resulting in some of the show’s most exasperating scenes—Lynch gleefully testing our patience.

Lucy may be onto something when she admits she ate the chocolate bunny that’s missing from the 26-year-old pack of them that turns up among old evidence, but don’t bank on it. Are the chocolate bunnies connected to the anthropomorphic rabbits in Lynch’s Inland Empire (2006)? Who knows? It’s fun to think about, though.

The scene in the Bang Bang roadhouse where Shelly Johnson (Mädchen Amick) and her friend Renee (Jessica Szohr) ogle recovered motorbike-accident casualty James Hurley (James Marshall) potently exerts nostalgia for 1991. This is complicated by the idea that Lynch’s 1991 was already nostalgic for circa-1960, and the fact that Amick’s and Marshall’s lovely faces are a quarter of a century older.

Lust never sleeps, of course, and where Shelly goes, trouble is sure to follow, especially as there’s a new hunk (Lost Highway‘s Balthazar Getty) in her sightline. Think Peggy Sue Got Married (1986), but with looming Lynchian sexual menace à la Blue Velvet (1986). 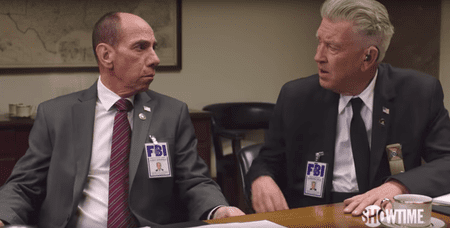 Much more alarming is the scene in which Preston (known as “T.P.” or “Tammy”) walks away from her colleagues with a haughty wiggle. This perks up the sickly Rosenfield; Cole, too, enjoys the moment. Innocuous explicit sex is expected in drama series nowadays, but can these guys really get away with making amiable comments about an attractive woman’s walk? The scene typifies the depths of depravity to which Twin Peaks has sunk. 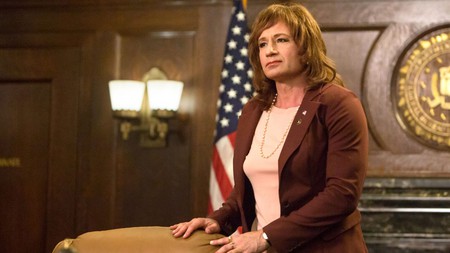 The woman behind the red door

Carrying his $20,000 slot machine winnings in a bag, Dougie Jones/Dale Cooper is driven in a limo (ordered for him by the suspicious casino boss) to his suburban home. He doesn’t know the address, only that his house has a red door. The woman who opens it and steps out to rebuke him for being absent for three days is his wife, Jane-Y Jones (Naomi Watts). A brisk homemaker, she mothers Dougie—telling him to “go potty,” for example—as if he were younger than their small son.

Given the range demonstrated by Watts in Mulholland Dr., let’s not assume that Jane-Y will remain in mumsy mode. She must have a wild past, surely, or hopefully a wild future.

Bear in mind that the 1960s pop singer Janie Jones, who inspired a song on the first Clash album, notoriously wore a topless dress to a 1964 film premiere and spent three years in prison in the mid-1970s for “controlling prostitutes.” (She’s still around.) 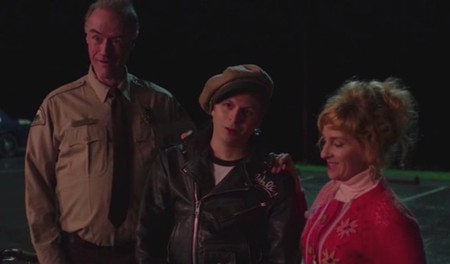 Dressed as Johnny Strabler, Marlon Brando’s motorcycle gang leader in The Wild One (1953), Wally is a sweet but pathetic figure. He rambles on about Lewis and Clark and the Great American Outdoors, but a falling leaf would probably knock him from his bike.

Good-natured Lucy and Andy are pleased to see Wally, but the gruff Truman makes his excuses and leaves. Wally is one of Lynch’s atypical archetypes, as opposed to one of his archetypal eccentrics, like the great Log Lady (the late Catherine Coulson), who feeds vital formation to Hawk.

For the love of Laura

A moving scene, rare in Twin Peaks, occurs late in episode four. Bobby Briggs (Dana Ashbrook), now a grey-haired cop, sobs on seeing the iconic homecoming photo of his lost love Laura. Now that Bobby’s sneer and swagger are gone, he’s finally a man, not a low-grade bad ass. Who can blame him for crying? We all have a photo like the one of Laura, whose frozen smile promised Bobby something ineffable he reached out to grasp, but which disappeared as quickly as a flash of light. 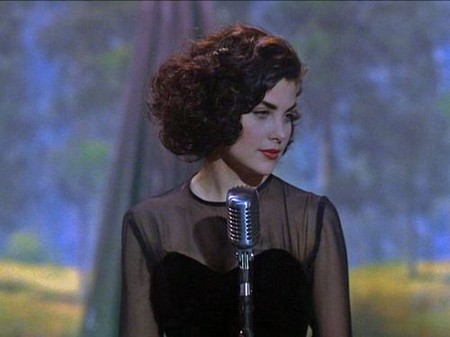 Audrey Horne (Sherilyn Fenn) back in the day | © ABC

For the love of Audrey

Episode four of the new season concludes without former sweater-wearing schoolgirl Audrey Horne (Sherilyn Fenn) making an appearance. Where is she and what—or whom—has she been doing? And where, now, is the American flag Fenn almost wore on a cover of New York magazine? Let it be revealed.