14 Movies Perfect for a Romantic Night In 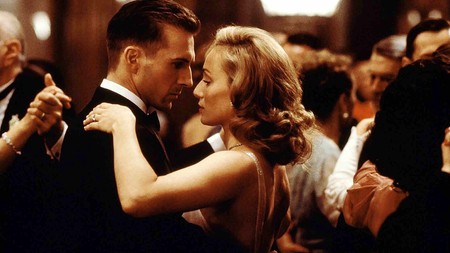 With all these movies ready to put us in the mood for love, let’s not wait for Valentine’s Day.

An elderly man (James Garner) in a nursing home jogs the memory of a woman (Gena Rowlands) suffering Alzheimer’s by reading to her a story written in a notebook. And, lo and behold, Noah (Ryan Gosling) and Allie (Rachel McAdams), the lumberyard worker and the heiress (respectively) in the tale, turn out to be the old couple’s younger selves falling rapturously in love, enduring separation, World War II, and the threat of a rival suitor to Noah.

What makes Nick Cassavetes’s 2004 film of Nicholas Sparks’s syrupy best-seller such a success is the exuberance, yearning, and passion of McAdams and Gosling. The pot at the end of the chick-flick rainbow is the promise of true love with the perfect man lasting a lifetime—and that’s what Allie gets. 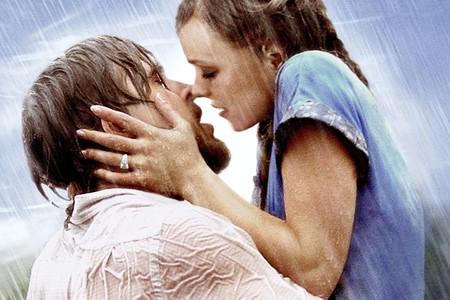 Concealing their identities from each other, crown princess Ann (Audrey Hepburn) and American reporter Joe (Gregory Peck) spend a chaste night and an adventure-packed day together in the Eternal City. Then they fall in love, naturally.

William Wyler’s sunlit 1953 classic takes in the Spanish Steps, the Mouth of Truth, the Trevi Fountain, the Colosseum, and the Piazza della Rotonda, among other Roman landmarks. More important, it takes in Peck and Best Actress Oscar-winner Hepburn at their most beguilingly beautiful and discreetly romantic. 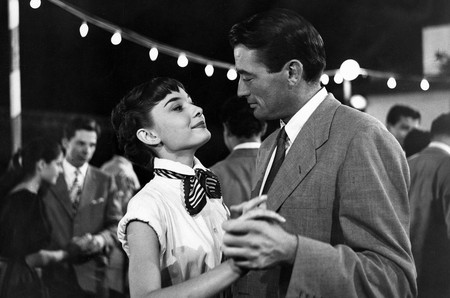 “You must remember this?” Michael Curtiz’s 1942 Oscar-winner depicts the struggle of a self-pitying cynic, Richard Blaine (Humphrey Bogart), to do the right thing by humanity during wartime when his lost love, Ilsa Lund (Ingmar Bergman), shows up at Rick’s Café Américain with her husband: the Czech resistance fighter Victor Laszlo (Paul Henreid). 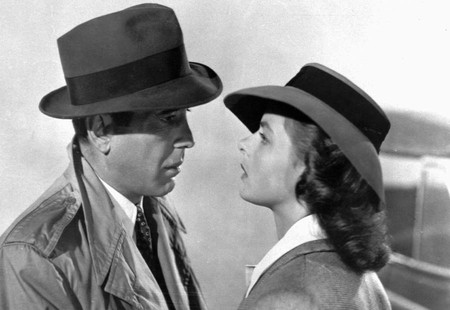 High-flown, emotionally exacting melodramas such as David Lean’s Doctor Zhivago (1965) and Ryan’s Daughter (1970) were out of vogue when writer-director Anthony Minghella transformed Michael Ondaatje’s novel into a simmering romantic powerhouse that won the 1997 Best Picture Oscar and eight others.

Casablanca’s footfalls echo throughout it. Burned to a crisp, Hungarian explorer Count Lászlo de Almásy (Ralph Fiennes) tells his nurse Hana (Juliette Binoche) the story of his tragic adulterous affair with the English woman Katharine Clifton (Kristin Scott Thomas) in the Libyan desert and his subsequent attempt to save her life. This is love on a tumultuous stage. One can truly say the earth moves. 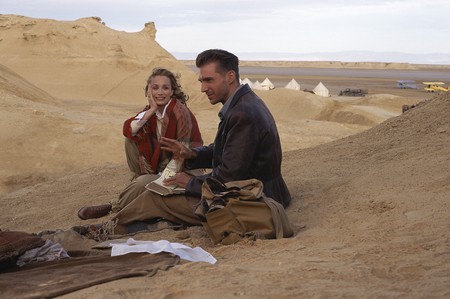 No brief synopsis can contain the poetry of director Wim Wenders and co-writer Sam Shepard’s visionary neo-Western romance, which owed greatly to Ry Cooder’s haunting slide guitar score. Who can forget the moment when pink-angora-clad Jane, unaware of Travis’s presence but aware of something, looks overs her shoulder in the peep-show bar and narrowly misses seeing him?

The third of six consecutive masterpieces written by Michael Powell and Emeric Pressburger, this 1945 love story is about a materialistically minded young Englishwoman (Wendy Hiller) who heads to a Hebridean island to marry a wealthy older man she doesn’t love.

The storm that delays her fatefully throws her into the company of a handsome Scottish Naval officer (Roger Livesey). Celtic mysticism, hauntingly evoked, determines the heroine’s fate in Powell and Pressburger’s heathery delight. 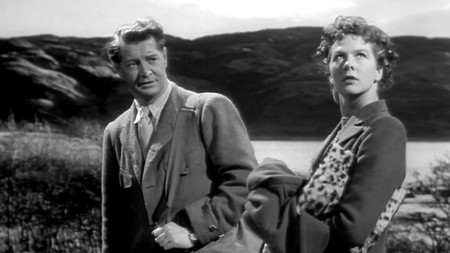 Jazz pianist and wannabe club proprietor Sebastian (Ryan Gosling) and waitress and aspiring actress Mia (Emma Stone) meet un-cute and fall in love—nothing can stop them from being together except each other. La La Land is in its infancy as a classic, but it is hard to think of a recent Hollywood romance that has so vigorously plucked at the heartstrings as Damien Chazelle’s bittersweet 2016 throwback to 1940s–1950s MGM musicals.

It’s reach shouldn’t be underestimated: “City of Stars” was on the radio all the time in Britain over Christmas 2017. 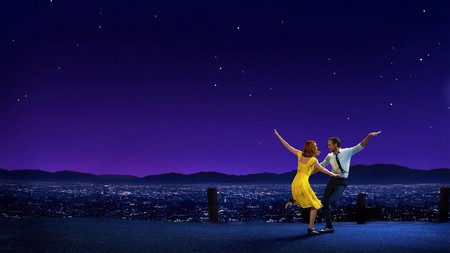 Wong Kar-wai’s meditation on unacted-upon love is the romance film of the century so far. In Hong Kong in 1962, lonely next-door neighbors Chow Mo-wan (Tony Leung), a journalist, and Su Li-zhen (Maggie Cheung), a secretary, conclude that their spouses are having an affair. Drawn together, they reenact how the affair might have started and then start to collaborate on a martial-arts newspaper serial. Gradually, they fall in love, but bad timing prevents them moving to Singapore together.

Love that isn’t consummated can last longer and be more powerful than love that is. The dreaminess of Wong’s film indicated that Chow and Su are colluding in an illusion that would burst like a bubble were they to do more than tantalize each other. Wong was influenced by Hitchcock’s Vertigo (1958) and has hinted there is something sinister in Chow’s insistence on reenacting his wife’s betrayal. Chow’s fetishization of Su as his idealized love object, meanwhile, plays out in Wong’s 2046 (2004). 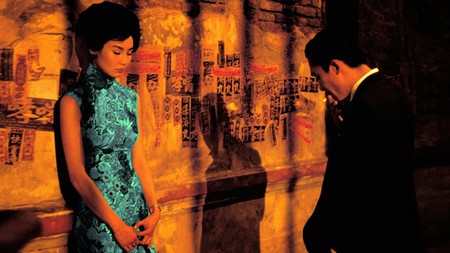 Traveling on an express from Beijing to Shanghai during the Chinese Civil War in 1931, British captain “Doc” Harvey encounters the notorious courtesan Shanghai Lily (Marlene Dietrich)—the former lover he abandoned five years previously when she played a trick on him to test his love. The fourth of Josef von Sternberg’s seven films with Dietrich involves the hijacking of the train (based on the 1923 Lincheng Outrage) by one of the passengers, Henry Chang (Warner Oland), actually a Chinese warlord, and encompasses the moral exposure of most of the other people aboard. 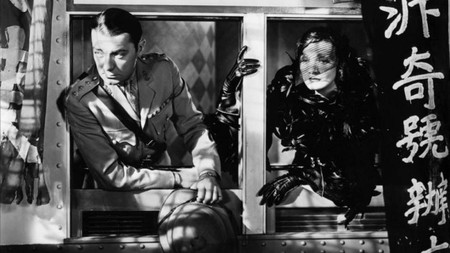 Though prudish by modern standards, David Lean’s Brief Encounter was a watershed movie for the candor with which it depicted an unconsummated extra-marital relationship between a middle-class doctor, Alec (Trevor Howard), and a housewife, Laura (Celia Johnson).

Implied sexual activity was commonplace in British films of the era, especially in the lurid Regency romps made under the Gainsborough Gothic rubric. While Laura and Alec desire each other, their torment is all the more powerful for being romantic rather than sensual. Lean’s famous use of Rachmaninoff’s Piano Concert No. 2 magnifies the mood of desperation and regret. 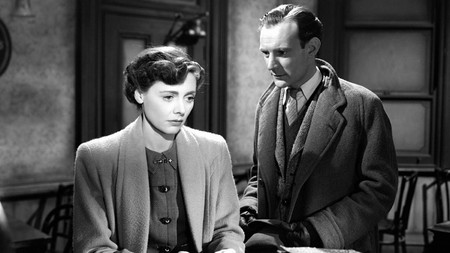 Charlotte (Scarlett Johansson) is a college graduate who has accompanied her celebrity photographer husband to Tokyo. Staying in the same hotel is Bob (Bill Murray), a veteran actor in town to record a whisky commercial. Each has a rocky marriage; each has time to kill. They spend hours in each other’s company and become close; the nature of Charlotte’s feelings for Bob emerge when she becomes jealous after he sleeps with another woman.

Bob’s feelings for Charlotte are reciprocated, but refusing the Circe in her ensures his Homeric odyssey through his midlife crisis will be peaceful. To sleep with her would be to unleash the hounds of hell. Sofia Coppola’s beautiful film shows a friendship between a middle-aged man and a younger woman can be pure and generous, but that doesn’t make it any less of a romance.

Not that it’s better or more urgent than My Beautiful Laundrette (1985), but Ang Lee’s Brokeback Mountain, adapted from Annie Proulx’s story, was a game-changer for the portrayal of gay love onscreen. The sex between Wyoming sheep herders Ennis Del Mar (Heath Ledger) and Jack Twist (Jake Gyllenhaal) is unabashedly carnal, but their relationship is equally driven by tender romantic longing and the overarching need to be together.

Ennis’s keeping and caressing of Jack’s shirts, shown hanging beside his own in his closet, remind us that love seldom ends with one partner’s death. Nominated for eight Oscars, Brokeback Mountain won three; its losing to the unremarkable Crash (2004) in the Best Picture category raised the specter of an anti-gay conspiracy. 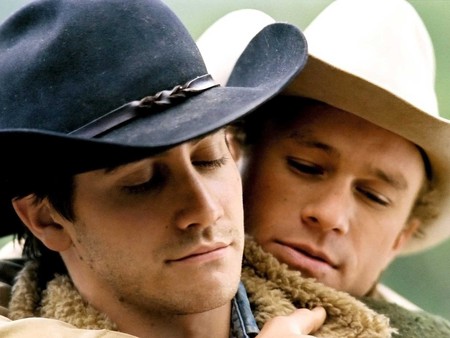 In its compact storytelling, gentle lyricism, and pre-Raphaelite palette, Thomas Vinterberg’s adaptation of Thomas Hardy’s novel tops John Schlesinger’s 1967 version, which squandered too much time observing rustics and social rituals. The quest of Bathsheba Everdene (Carey Mulligan) to find a man who will tame her, and be her equal, transcends sex (what Tom Sturridge’s Sergeant Troy gives her) and wealth (what Michael Sheen’s Boldwood offers her), and leads her to the staunchness, kindness, and rugged masculinity of Gabriel Oak (Matthias Schoenaerts). It’s hard to watch Mulligan singing “Let No Man Steal Your Thyme” and not melt. 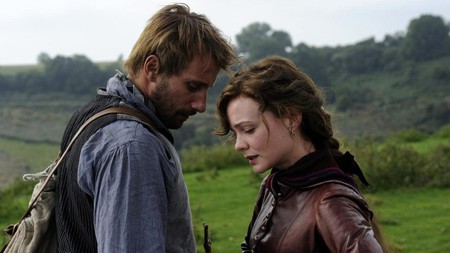 When they step onto the path of true love at Christmas–New Year 1952–53, it doesn’t run smooth for New Jersey socialite Carol Aird (Cate Blanchett) and the younger shop girl and aspiring photographer Therese Belivet (Rooney Mara). Carol is married with a small daughter, Rindy, and her estranged husband Harge (Kyle Chandler) intends to exploit Carol’s sexual orientation to prevent her sharing Rindy’s custody. Todd Haynes’s 2015 drama, adapted by Phyllis Nagy from Patricia Highsmith’s first novel, made a bold political statement in the year same-sex marriage was legalized in the USA. That aside, it is exquisite, passionate, and swoony. 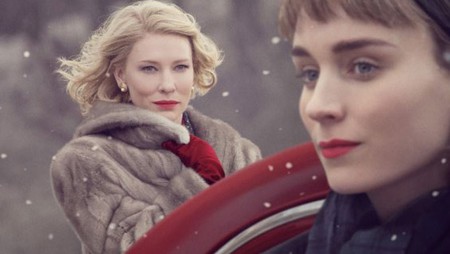