Every year, for one week only, a temporary town of over 70,000 people appears in the dust of Nevada’s Black Rock Desert. Burning Man is the world’s largest user-generated festival. A ‘choose your own adventure’ of art installations, sound stages, unexpected foodie discoveries, spiritual brick-a-brack and general magic and mayhem, all envisioned and created by the community itself.

Sure, partying plays a central role — daytime shindigs turn into nighttime raves that slip into post-sunrise revelry — but this desolate festival also has plenty of health-focused classes, talks, workshops and events to restore some much needed equilibrium. Here are a few things The Culture Trip discovered on the playa this year.

Of all the things you’re likely to stumble across in Black Rock City, a group of brave souls running 50k in the desert heat and choking dust might just be the most bananas. The course makes four loops of the Esplanade (inner edge of the city) and out into the deep playa (the distant desert). Simply being in this environment can feel like a survival bootcamp at times, let alone pushing your body through 50 gruelling kilometers, so proper prep is key. A dust mask, camelbak full of water, energy gels, sunglasses, headtorch, and pair of goggles are all essential pieces of gear if you want to participate, but we found that watching and cheering was exertion enough for us. 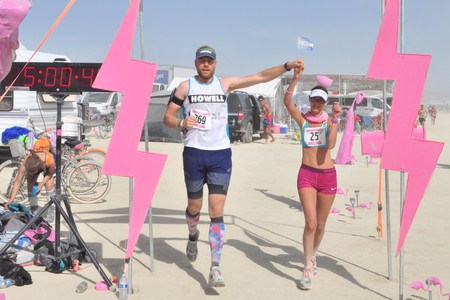 It goes without saying that the Burning Man community loves yoga. You’ll find every type among the camps of Black Rock City, from hatha and vinyasa flow to niche ‘laughter yoga’ and even *gulp* ‘naked yoga.’

We checked out the Jivamukti class at the Raised by Wolves camp, a style that originated in New York City and honors the spiritual lineage of the practice. Just what’s needed to stretch out your body after several days of bike riding / disco dancing.

The playa is an overwhelming place to be. A bombardment of sights and sounds that will have you craving a moment of quiet away from the constant cacophony. When that moment occurs head to one of the festival’s mindfulness classes.

The calmest and most aesthetically striking time of day in the Black Rock Desert is daybreak, which is why we liked the sound of post-sunrise guided meditation at Floasis camp. Once you’re centered take a solo cycle into the deep playa to see the art at its most magical and least crowded.

From tap to tango, dance classes are pervasive on the Burning Man events schedule. It’s just a matter of deciding on one that appeals, which for us was the Beyonce dance class at Camp Clubhouse.

The teacher broke down the choreography to Formation for a packed tent, with an emphasis on effort over accuracy. The sun was setting, which, thanks to the unique cloud formations and dust swirls in this part of the world, bathed the whole of Black Rock City in a tangerine glow. It was the perfect precursor to another night of playa parties, and a welcome contrast to the EDM most DJs favor.

Because there’s no such thing as OTT at Burning Man, Camp Space Jam offered an acro yoga class for people dressed in space inspired costumes (think anything metallic, glittery and iridescent).

Acro Yoga is, as the name suggests, a combination of yoga and acrobatics. It incorporates stretches and impressive balances performed with a partner, which seems like the perfect embodiment of the festival’s “radical inclusion” principle.

With so much to explore and experience, you spend most of your time on your feet, cycling, dancing, walking and climbing around the festival. The thing you really want most after all that physical exertion is a massage, and thankfully there are several camps that offer bodywork lessons. All you need is a willing partner.

We particularly liked the sound of Thai massage. The combination of kneading and stretching is an ideal remedy for tight, over-tired muscles.

Move over poi, the hippies have a new favorite performance activity.

Groups of men and women rolling, twirling and throwing hoops is a ubiquitous sight at Burning Man, and there are plenty of opportunities to get involved. Join a beginners workshop for a crash course in hooping that will give you nostalgia for childhood recess on the school field (not to mention a killer abs workout). 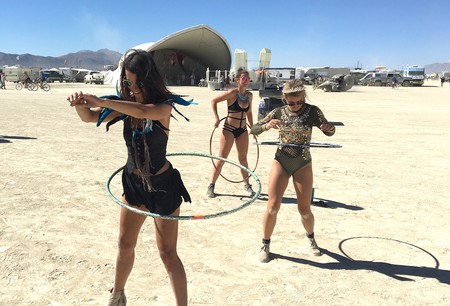 For those who are serious about their fitness, macho camp Settle This Like Men offered daily morning tabata sessions described as “burpees, push-ups, and all kinds of unpleasantness mixed in with horribly short rest periods.”

If you have the energy for an hour of HIIT (high intensity interval training) at Burning Man we salute you! We also pray you have access to a shower…

With numerous studies reporting it can help reduce pain, anxiety, insomnia, nausea and headaches, acupuncture is a smart offering for Burning Man.

Camp Plaisance offered burners auricular acupuncture — the stimulation of pressure points on the ear which supposedly correspond to the various systems and sections of the body. Placebo or not, it’s worth a try.

The classic Black Rock City diet consists primarily of instant noodles and granola bars, so when you stumble across a Farmers Market offering bowls full of organic fruits and veggies you’ll be set to gorge.

Camp More Carrot (AKA Black Rock City Farmers Market) pick, prep and freeze organic produce from their California farm, transporting it to the playa and serving it to under-nourished burners every morning.

It’s the small things that make a difference at Burning Man, and More Carrots’ plump grapes, sweet yellow melon and balsamic soaked tomatoes taste nothing short of decadent on the isolated, dusty playa.