The Divinity Khat: Khat Farming And Its Consequences

Chewing the khat plant in Yemen is an age-old tradition and its growth plays an important role in the Yemeni economy. But the World Health Organisation classified the khat plant a drug of abuse in 1980 and its production has been highlighted as a major user of water: a resource in high demand in Yemen. 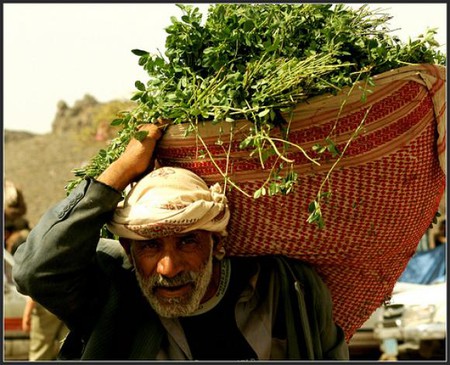 Considered a divine food by the ancient Egyptians, the plant khat is known for euphoric effects. Typically, fresh leaves are chewed and kept in the mouth, but can be dried and brewed in tea. In Yemen, men are the primary users, due in part to a commonly-held belief that the khat plant enhances communication and causes relaxation.

It has been used worldwide, thanks in part to migrant cultural behaviour, and thanks to its reputation as a, not-as-addictive-as-tobacco, recreational drug. In 1980 the World Health Organisation deemed it to be a ‘drug of abuse’. Its production, sale and consumption is controlled in some European countries and North America, but is still grown relatively freely in areas of Africa and Asia, including Yemen, Somalia and Ethiopia.

The khat plant plays a significant role in the social lives of Yemeni people. Some spend large proportions of their income buying the leaves, however: the khat farming industry employs a large number of Yemeni people.

The khat plant’s medical hazards have not yet been widely studied but there is some evidence it increases the risk of mouth cancer and could lead to mental health problems. Illuminating is the classification of khat by Australian government, which places the drug in the same group as cannabis.

One thing which is not somewhat a mystery, however, is the khat plant’s environmental impact. In 2003, Sana’a was the world’s fastest growing capital. Yemen’s increasing population continues to suffer from a considerable lack of water. The problem is exacerbated by the cultivation of the khat plant (among other pressing issues) which demands significant amounts of water for large-scale production.

The constantly-changing governing bodies of Yemen are weighed down with the task of finding a water source which can supply the increasing population numbers. One means has been highlighted: to end the consumption of the khat plant. But this enters Yemen into a new vicious circle, which necessitates the establishment of new employment.