Boushra Almutawakel: An Eye for Beneath and Beyond

Boushra Almutawakel, the first ever recognized female photographer of Yemen, remains distinct for being the first, but also for daring to voice the cultural and religious controversies prevailing in her country through her talent.

Boushra was born in 1969 in the capital city, Sana’a, to a very conservative and religious family called the Hashmis. She acquired her initial education from her native country and later attended a degree program for International business in Washington DC. During this time she undertook a six-week summer course for photography, which intrigued and inspired her in numerous ways. On her return to Yemen in 1994, in spite of being hired as an educational advisor, she didn’t keep herself from her passion. She held photography exhibitions and received considerable acknowledgment for her work. 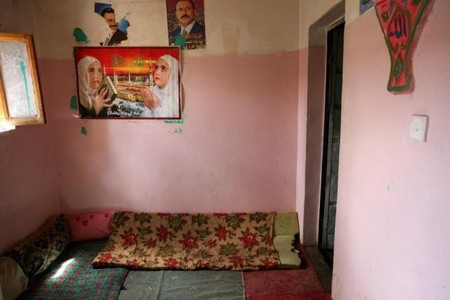 After three and a half years she decided to give up on her job and pursue photography as a full-time career, against the advice of her peers. She travelled to remote areas of Yemen and came across fascinating people to photograph. In 1999, she was bestowed with another opportunity to visit the USA with her husband. Taking advantage of this opportunity, she enrolled at a portfolio centre, earning a diploma in advertising photography. Her work in the USA mainly included portraits of women. She managed to exhibit her work nationally and internationally and worked for several renowned organisations including the United Nations, CARE International, the Royal Netherlands Embassy, the French Cultural Centre, the British Council and various magazines and papers. In addition to this, she has won awards and titles for her remarkable talent and artistry.

Finding the veiling of Muslim women to be a controversial issue, and also considering the diverse opinions it attracted, Boushra wanted to project the various facets of Hijab through her art. She took it up under a project titled, Hijab Series in 2001. The ongoing series portrays women subject to the cultural impositions involving the hijab, bringing to light the stereotypes attached to it.

True Self (2002) was an undertaking inspired by the perspective of Nawal Sadway, of having the true identity of a girl hidden, whether she is clad in a hijab or adorned with makeup. She photographed women wearing makeup and covered in a dark veil, in comparison to her real self without any adornment. ‘True Self ii’ (2010) is a further elaboration of the existing idea with more profound insight and analysis. Another important work, ‘France flag’ (2010) depicts the ban on women wearing veils by France as an incongruent undertaking, depicting a lack of tolerance, understanding of human rights and freedom of choice.

In What If (2008), she challenges the norms of the society by picturing man in a veil instead of women. This idea was immensely popular with females, but attracted great criticism from men. Boushra complained that males failed to see the humour in it. One of her recent work includes photographs of a woman dressed as man. Through this unique depiction, she has pinpointed the similarity there is in the dresses of men and women of the Arab world; both wear loose long gowns and head coverings. Moreover, she has pictured woman in a powerful role emphasizing that they are just as good if given the opportunity. 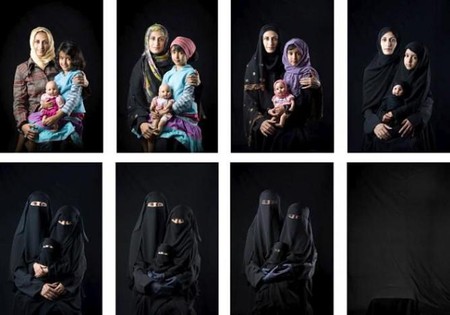 Eyemotion (2008) metaphorically comments on the unnecessary trend of covering the face as part of veiling. She humorously portrays the suppressive facet of such an extreme form of covering. Mother, daughter and doll (2010) is one of the vibrant sub-projects of this series, in which the photographer used herself, her eldest daughter and a doll to exhibit the extremist view of women’s dress. The series of photos ranges from them being dressed casually to eventually disappearing. She photographed the colourful hijabs of Yemen to highlight their beauty and charm, in comparison to the dull dark gowns imported from the Gulf and Wahhabis.

Fulla (2010) is fun picture series covering the life events of a regular Muslim girl using ‘the Islamic Barbie doll’ as Boushra describes it. It ranges from the snapshots of her university lifeto observing everyday prayers.Her work does not only revolve around veils or women’s issues. She has worked on other projects involving development, socio economic issues and education. Strata is a project commissioned by the British Council, highlighting the various classes residing in Sana’a by photographing interiors of villas to huts in slums. Another project executed by Boushra is called The Contemporary Muslim life, which documents the rituals and traditions that Muslims observe, varying from marriages, prayers, and celebrations to other religious festivities.