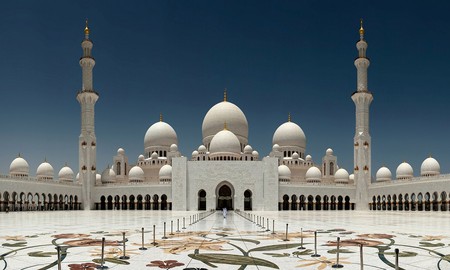 There is no shortage of mosques in the United Arab Emirates, Abu Dhabi alone has approximately 1,500 places of worship for Islamic devotees to attend. However, there is one mosque that stands out when compared to the rest. Sheikh Zayed Grand Mosque is one of the eight largest in the world and is impressive not only for its size but for its architecture. With marble walls, intricate stone work and crystal chandeliers, this mosque truly is jaw-droppingly beautiful.

The Sheikh Zayed Grand Mosque takes the name of the first ruler of the UAE, the Late Sheikh Zayed bin Sultan Al Nahyan. It was His Highness’s dream and vision to build this mosque and he set its foundation stone. The Late Sheikh’s burial space is located right next to the mosque, making it an emotional location for UAE residents. The Sheikh Zayed Grand Mosque was built to be a symbol of tolerance and respect, allowing different cultures to understand each other and acquire a greater knowledge of Islam. The main message behind the mosque is as beautiful as its construction: peace, love and tolerance. 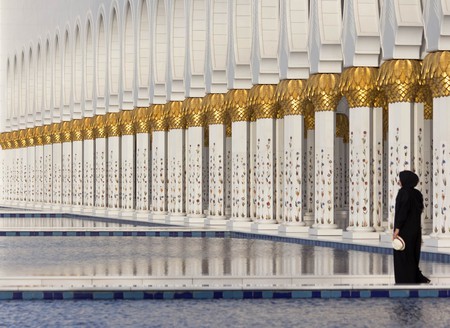 The walls of the Sheikh Zayed Grand Mosque were built entirely of marble from Macedonia. The color white is one of the most astonishing characteristics of the mosque; chosen by the late Sheikh Zayed as an illustration of purity. The marble walls are complimented with colorful stones in the shape of flowers all over the mosque. From the columns to the walls of the entrance, to the main prayer hall, visitors can marvel at the intricate detail of the flowers, giving a pop of color to the beautiful white walls. 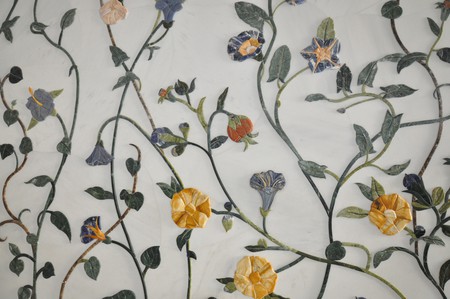 The prayer hall is a work of art of its own. From floor to ceiling, the exquisite detail put into every inch of the space will leave visitors in complete awe. The floors are covered by what is the world’s largest hand-knotted carpet. Approximately 1,200 artisans were required to bring the vision of third generation carper maker, Dr Ali Khaliqi, to life.

As impressive as the carpets are, looking up is just as stunning. The mosque has seven crystal chandeliers altogether, however the largest is located in the main prayer hall and weighs around 12 tons. The “smaller” chandeliers in the hall weight 8 tons each. They were made with impressive detail and even have Swarovski crystal decorating them.

The walls of the main prayer hall are again made of marble and are covered in beautiful designs, along with the ceiling. The main well which faces Mecca where the Iman stands on the Pulpit or Menbar while conducting prayer, is decorated with the 99 names of Allah in Arabic. This is a sign of enormous devotion and respect. 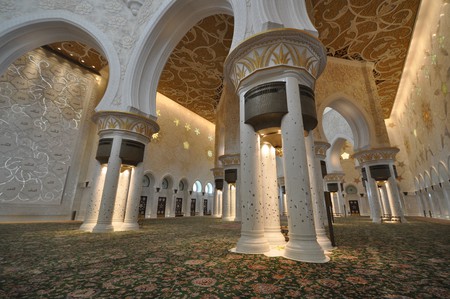 The Sheikh Zayed Grand Mosque has an overall 82 domes varying in size. These are made of marble like the rest of the mosque and carry details in gold-glass on top of them. Below the domes are windows which allow natural light to enter the mosque’s prayer halls. The largest of these domes is located atop the main prayer hall.

The mosque has 22 light towers for outdoor illumination during the evening hours, but even the lighting of the mosque is special. The lighting represents the phases of the moon, starting with darker clouds to illustrate the beginning of the month with the crescent moon and changing gradually to more vibrant lighting as the full moon approaches.

Overall, the Sheikh Zayed Grand Mosque truly is an architectural work of art and undoubtedly the most beautiful mosque in the United Arab Emirates. Every tourist should feast their eyes on this beautiful symbol of Islam when they visit the UAE. 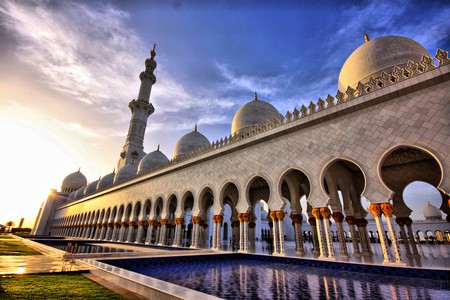