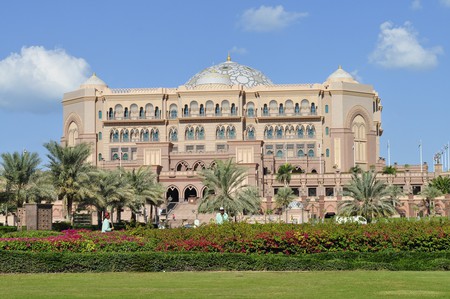 Abu Dhabi has no shortage of hotels and attractions for visitors coming to stay in the capital. However, this Emirate’s crown jewel definitely has to be the Emirates Palace Hotel. Known as the third most expensive hotel in the world to build, the Emirates Palace cost approximately US$3 billion to construct. It will cost around US$290 dollars a night to stay at this luxurious, record-breaking hotel – this being the hotel’s special offer! Nevertheless, every corner of the Emirates Palace is a sight to behold, and the money will be well spent.

The Emirates Palace Hotel is the second seven-star hotel in the world, with the other being the Burj Al Arab in Dubai. The Palace opened its doors in 2005, and it has 394 luxury rooms and suites to accommodate visitors coming to Abu Dhabi. Some of the most famous regulars at the Emirates Palace are royalty. Indeed, the penthouse of the hotel consists of six Ruler Suites, which are made to accommodate rulers, such as the Sheikhs of the different Emirates that make up the UAE. The smallest suite at the hotel is 110 square metres (1,184 square feet). 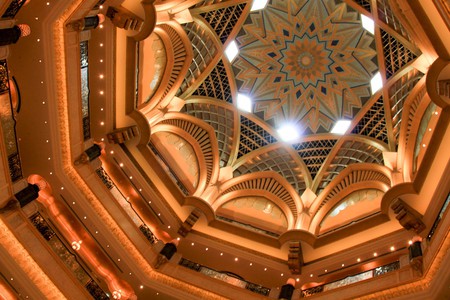 One of the most iconic features of the hotel is the dome in its atrium. The 60-metre-high (197 feet) dome is the largest in the world, and the most impressive part of it is the 22-carat gold leaf that covers the inside of it, exuding luxury and richness. The gold theme is consistent throughout the hotel, as a way of illustrating Arabian culture and style – in the most expensive way possible. Another golden detail is the golden cappuccino served at Le Café, one of the dining experiences at the Emirates Palace Hotel. This café offers the 24K Gold Flaked Palace Cappuccino, which features real flakes of 24-carat gold, which is edible. The Palace’s signature dish, the Emirates Palace Camel Burger, is also found at Le Café. This burger is also served with 24-carat gold – further emphasising the idea of traditional Arabic style meeting luxury. 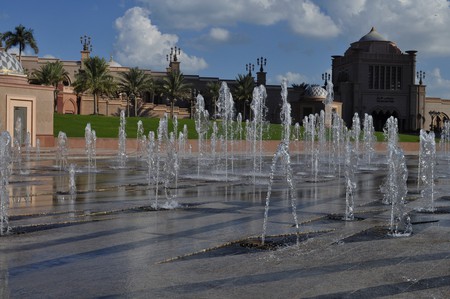 The Emirates Palace Hotel also has its own private beach, which stretches on for 1.3 kilometres (0.8 miles) – in addition to a 1,000-hectare park featuring palm trees and fountains. Wimberly Allison Tong & Goo designed this architectural wonder, which was made internationally famous in the Furious 7 movie; it featured alongside the popular Abu Dhabi skyline, which sits right opposite of the hotel, offering a unique view to those arriving. Additionally, the hotel is also home to a luxury spa. The 1,500-square-metre (16,146-square-foot) Emirates Palace Spa offers a series of treatments, such as facials and neck upgrades, using 24-carat gold sheets.

Overall, the Emirates Palace offers the ultimate luxury experience for its guests, showered with unlikely touches of gold and plenty of space to feel like royalty. 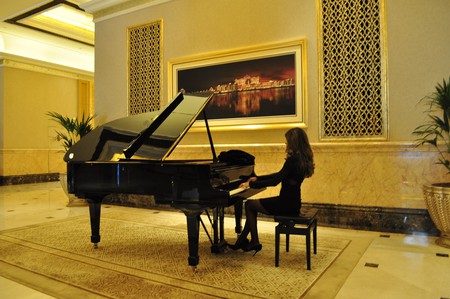 Emirates Palace | © Raventhorne/Pixabay
Give us feedback