Why Falcons Are Important to Emirati Culture 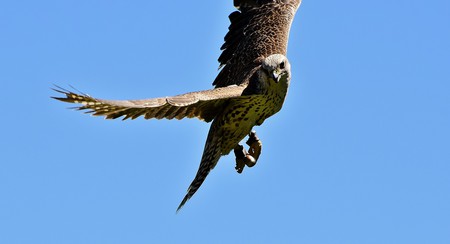 These birds have played a crucial part in the traditional culture of the United Arab Emirates. Their use by Bedouin hunters dates back hundreds of years, making the falcon one of the most important animals in the country.

Falcons have been a crucial animal for hunting in the Arabian Peninsula for such a long time that there’s no evidence as to when Bedouins first started using them to hunt and they have played a crucial part in the history of the UAE. With the scarce desert environment, falcons helped Bedouins hunt animals native to the region, such as bustards and curlews.

One of the hunting techniques that set them apart from other predatory animals, is that they can be trained to deliver their prey, without killing it first. This is vital because in Islam, animals used for food must still be alive when their throats are cut and blood is drawn, in order to ensure that the meat is halal. 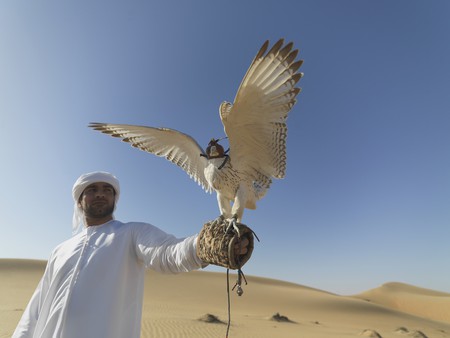 Falconry is a popular sport in the UAE, and enjoyed by ordinary citizens as well as the highest ranking members of society. It is usually practiced in desert and semi-deserts around the region. The most popular species used by hunters are saker and peregrine falcons, the latter being an especially expensive breed to obtain.

Visitors will often see falcons’ heads covered with a leather hood, called al burqa – it’s an essential part of training. The process involves depriving the bird of food, making it easier to tame, and building a strong relationship between the falcon and falconer. 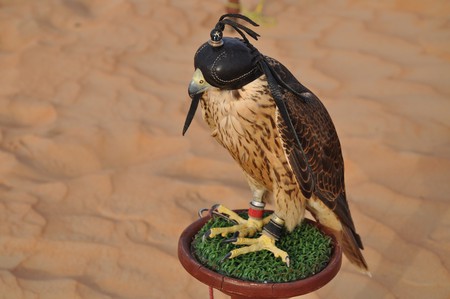 The popularity of falconry in the UAE has grown so strong over the years that the country has established two specialist hospitals to take care of these magnificent birds – the Dubai Falcon Hospital and the Abu Dhabi Falcon Hospital. Both focus on solely treating these animals and are fully equipped to provide falcons with the best healthcare possible.

In addition to being to having ready access to medical care, falcons are the only animals in the UAE that are legally allowed to travel inside planes – but only in business and first class, enjoying a level of luxury that most humans can only dream of.