Why Abu Dhabi Should Be on Your Bucket List, According to Radio Producer Mona Al-Marzooqi 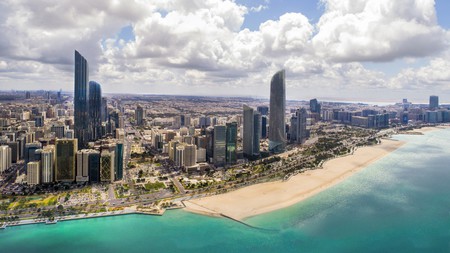 With cutting-edge cultural institutions and world-class art museums, Abu Dhabi has quickly distinguished itself as the artistic centre of the United Arab Emirates. Local radio personality Mona Al-Marzooqi lists her favourite spots and tells Culture Trip why Abu Dhabi should be on everyone’s bucket list. 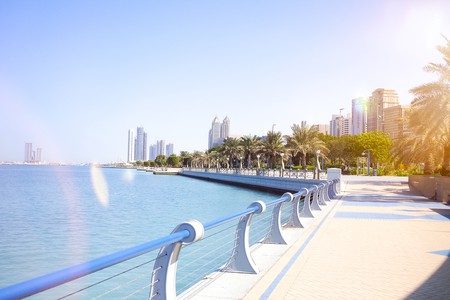 Famous for its awe-inspiring architecture, record-breaking attractions, grand art museums and historic cultural sites, Abu Dhabi is undoubtedly culturally rich. As the second-most populous city in the Emirates, the city has grown since the Bedouin of the Bani Yas tribe first established a settlement here in 1761. Since then, Abu Dhabi has prospered through pearl trading and oil production, and today, it is a cosmopolitan city that’s as much about the future as it is about the past.

Mona Al-Marzooqi, producer and presenter on Radio 1 UAE, one of Abu Dhabi’s biggest pop stations, has seen the recent changes first-hand. Born and raised in the capital, Al-Marzooqi has lived in Abu Dhabi for most of her life, leaving only for a short study stint in the United States. As a proud ambassador for the emirate, the professional-photographer-turned-radio-personality has seen Abu Dhabi grow from a quiet traditional village into an ambitious, vibrant city. 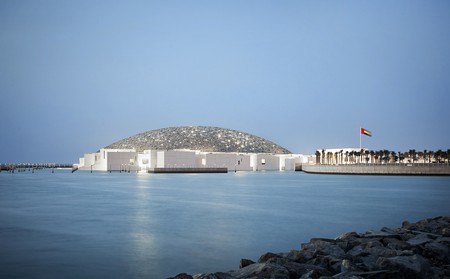 Since the opening of the Louvre, Abu Dhabi has become an art destination for travellers | © Courtesy of the Department of Culture and Tourism Abu Dhabi. Photo by Hufton+Crow

The cultural epicentre of the UAE

“Abu Dhabi has changed so much in recent years, and the developing art scene has definitely boosted the city’s reputation internationally. Experts from all over the world come to collaborate on projects like the Abu Dhabi Art Fair,” explains Al-Marzooqi. “We now also have our very own Louvre, which is such a well-established name internationally and probably the city’s biggest drawcard.”

Abu Dhabi is building its international profile as a growing and forward-thinking cultural capital, and as Al-Marzooqi mentions, the emirate has certainly been helped by the opening of several awe-inspiring art museums, including a future outpost of The Guggenheim. In addition to these renowned art institutions, the Zayed National Museum is opening in the up-and-coming Saadiyat Island Cultural District. This cultural centre will be dedicated to the UAE’s founding father, Sheikh Zayed bin Sultan Al Nahyan, and will showcase the UAE’s economic triumphs, fascinating history and rich culture.

With a culture that has for years been so firmly rooted in Islamic traditions, the city known as the ‘Land of the Gazelle’ offers plenty of millennial travel motivation. For example, travellers can take a closer look at the world’s biggest hand-loomed carpet, enjoy a shisha session in a local café, stay at the furthest leaning tower on the planet or drive across the golden sands on a desert safari, to name a few.

“Visitors often think that Abu Dhabi is more conservative than the neighbouring emirate of Dubai and that as a traveller, you can’t do as much here. But once you’re here, you quickly learn that it isn’t the case,” Al-Marzooqi says. 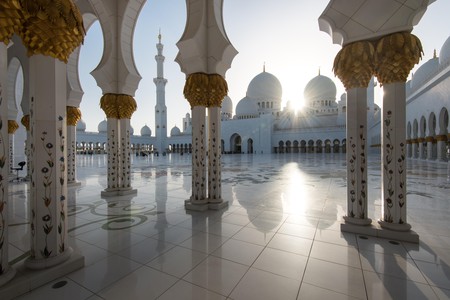 As the legend in Abu Dhabi goes, when a young antelope led a wandering Bedouin tribe to fresh water more than 250 years ago, the Abu Dhabi of today wasn’t even imaginable. It was 1761, and the resourceful desert dwellers took a fancy to the landscape due to its proximity to the coastline (for fishing), date farms and an oasis for water. The tribe spent several years building hundreds of palm-frond barasti huts and a small ruler’s fort – it was to develop and grow from there.

In the years since, the once relatively unknown desert island has undergone a mammoth transformation into a bustling metropolis, with as much modern appeal as historical significance. The discovery of oil, the pearl trade, and growth and development have all played their part.

“I think Abu Dhabi has improved its tourist appeal tremendously of late – I mean you can visit theme parks, shopping malls, museums, beaches, luxurious islands, the desert, of course, and still enjoy the peaceful oasis I have grown to love,” adds Al-Marzooqi. 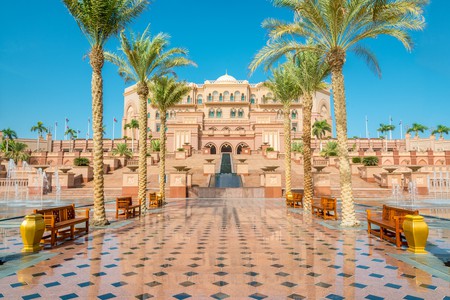 The Emirates Palace, a five-star luxury hotel, has become one of the most lavish places to stay in Abu Dhabi | © Mlenny / Getty Images

Al-Marzooqi, who has in recent years become a popular figure on the emirate’s airwaves, suggests visitors take a tour of her hometown and admire landmarks such as the grandiose Sheikh Zayed Grand Mosque and Qasr al Watan, the newly opened Royal Palace building beside the Emirates Palace. She also recommends the fascinating Heritage Village, which provides a step back into days gone by, and the falcon hospital, where tourists are introduced to the national bird and educated about its special place in Emirati culture.

Meanwhile, theme parks like Ferrari World and Yas Waterworld are ideal for adrenaline junkies, while the magnificent Formula One track at Yas Marina Circuit is a must-see for all F1 racing fans.

Abu Dhabi isn’t short of lavish experiences. For a dose of modern luxury, there are sky-high afternoon teas with unforgettable views – try the Observation Deck at 300 at Jumeirah at Etihad Towers. Also, indulge in a 24-carat gold facial at Emirates Palace, or charter a helicopter to The St Regis Abu Dhabi’s helipad. 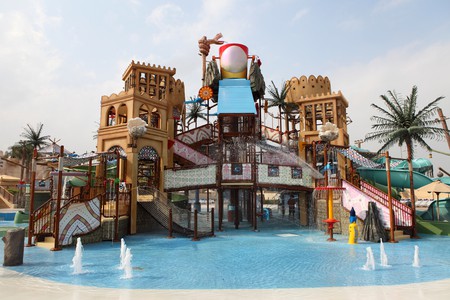 In the social media age of today, Al-Marzooqi acknowledges that attracting interest and following on social media globally is imperative to her hometown.

The attractions mentioned above are obvious choices for that, but it’s the hidden gems that Al-Marzooqi says make her home something of a treasure-trove destination.

“I believe the true beauty of Abu Dhabi is the peacefulness of the place,” Al-Marzooqi tells Culture Trip. “You can actually enjoy different activities here without the crowds and the noise, like taking a pearl tour at Eastern Mangroves or watching the sunset from the top of Jumeirah at Etihad Towers hotel. But if you are looking for action, there are places for that as well. So, it’s the best of both worlds.”

Al-Marzooqi admits she spends a lot of her spare time in local coffee spots such as Meylas at Al Raha Beach or new hotels like The Abu Dhabi EDITION, but she says the city’s cluster of small islands has also become tourist calling cards. 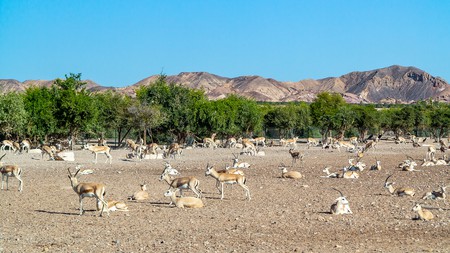 Al-Marzooqi is keen to offer some advice on Abu Dhabi’s hidden gems.

“I believe that what is important when travelling is taking the time to understand where you are. When people visit, I like to take them to Meylas at Al Raha Beach, located in the newly built beachfront development Al Muneera Plaza, because it gives them an introduction to the local dishes here, like the traditional rice and lamb dish called lamb machboos or sweet Emirati dumplings known as luqaimat,” she says. “I also really like the Market Kitchen at Le Royal Meridien and The Warehouse Wine & Tapas Bar at Pearl Rotana [in the Capital Centre District] for drinks. But my absolute favourite, which I don’t tell everyone about, is the hidden bar inside Dai Pai Dong at Galleria Mall. I love how chilled out and intimate it is.”

Al-Marzooqi goes on to say: “I often find that I take for granted the little things that travellers from elsewhere actually find incredibly interesting. Things like being able to enjoy a cup of karak tea that’s been delivered to you in your car while you’re parked by the sea at places like Hudayriat Island, or digging into a camel burger at the Camel Station restaurant at Al Bateen.”

She emphasises that the best travel experiences are the ones that focus on the region and the people.

“When I was living in America, I went to the well-known museums such as the MET in New York, Brooklyn Museum and The Guggenheim in New York, but honestly, I recall the smaller ones more because they were more about the region and people.”

With a landscape that allows tourists to experience desert adventures like dune bashing and camel trekking to world-class cultural hotspots, Abu Dhabi has more than earned itself a place on every global traveller’s bucket list.