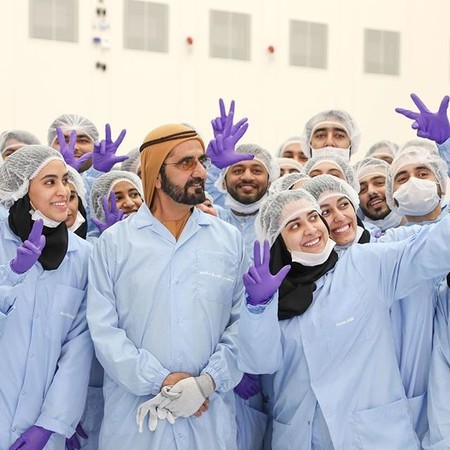 Near the world’s tallest building – the Burj Khalifa – a huge structure stands as a reference to His Highness Sheikh Mohammed bin Rashid al Maktoum’s famous three-finger salute. Here’s everything you need to know.

Situated in Burj Park, the monument shows the arm of the Vice President and Prime Minister of the United Arab Emirates and Leader of Dubai, with a hand gesture that has been replicated across the world since its debut in February 2013.

Using the thumb, forefinger and middle finger, it consists of three initials that stand for a very important message. The statue’s base serves as a reminder of what the Dubai royal wants you to remember with the words “quality is not merely an end, it is a way of life” inscribed in both English and Arabic.

The gesture was originally introduced during the Government Summit in Dubai, when Sheikh Mohammed wanted to create a logo for himself and his country, and has taken off since then. In honour of the UAE’s 45th National Day in 2016, 2,223 students of the GEMS Education schools in Dubai gathered to recreate it for the world’s largest transforming moving human image.

At the Paralympic Games earlier that year, Powerlifter Mohammed Khalaf brought it to the world stage as he claimed gold in Rio de Janeiro, Brazil. Elsewhere, the Dubai royals have really embraced Sheikh Mohammed’s three-finger salute too, with his son, His Highness Sheikh Hamdan bin Rashid al Maktoum often being pictured promoting it.

Here’s a breakdown of what the three-finger salute means:

When all three fingers are straight, a “W” is visible which stands for the “win” aspect of this gesture. The UAE is no stranger to winning, with many Dubai World Cup trophies in the bag as well as accolades from horse racing competitions elsewhere around the globe. Alongside many Guinness World Records, the UAE is always striving to show residents and those watching around the planet that a good work ethic pays off.

On a similar level, the “V” displayed using the index and middle fingers is for “victory”. Sheikh Mohammed is a huge advocate of making sure the people of the UAE succeed at what they do. The Leader of Dubai even hired a Minister of Happiness to ensure people are fulfilled.

سعدت اليوم بتخريج دفعة جديدة من طلبة وطالبات الجامعة الأمريكية في دبي.. التعليم هو المستقبل وبه تبنى الأمم والحضارات Today, I had the pleasure of attending the graduation of the class of 2014 from the American University in Dubai. Education is the future and the key to building great nations and civilizations

Using the thumb and the index finger, the capital “L” is visible, and is the initial for the “love” aspect of the gesture. Sheikh Mohammed has continuously launched initiatives that demonstrate his love for the United Arab Emirates, one of them being the Arab Hope Makers scheme where he celebrates people’s philanthropic efforts by giving away cash prizes to those giving back to their communities.