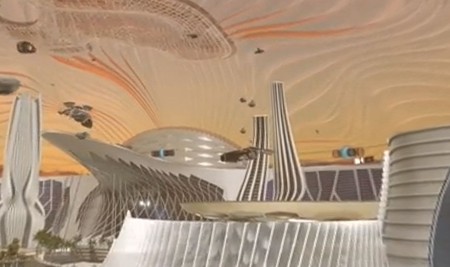 The race to Mars is well underway, with NASA, SpaceX, the Chinese government, and others looking to put humans on the Red Planet first. Now the United Arab Emirates has released a virtual reality experience of what they hope will be the first city built on the planet.

The City of Wisdom may only exist in virtual reality right now, but for the UAE government, it’s a future endeavor. The country wants to lead an effort to establish the first settlement on Mars by 2117. The country also plans to send a probe to Mars in 2021, and will build a Mars base simulation in the desert.

In the video, viewers are greeted by their host. “On behalf of the United Government of Mars, I would like to welcome you to your second home.” The pod visitors are traveling in then goes outside, where heavy machinery and terraformers are working hard. After a short journey through the Martian landscape, occasionally passing terrifying arachnid-like machines, a large red dome appears on the horizon: the City of Wisdom.

The city includes laboratories, green spaces, a university, and 600,000 residents and 200,000 monthly visitors, and appears to feature flying ships as a means of transport within the dome.

The UAE’s plan for a city on Mars involves different stages. The first phase will focus on preparing the people able to achieve the scientific breakthroughs required. The project will begin with an Emirati science team and will be extended to include international scientists and researchers.

“The landing of people on other planets has been a longtime dream for humans. Our aim is that the UAE will spearhead international efforts to make this dream a reality,” Sheikh Mohammad, the leader of the UAE, said when the project was announced.