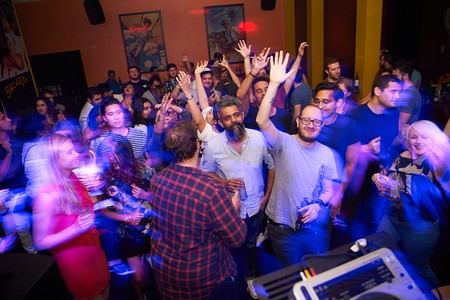 In a city with the brightest lights where luxury is in every detail, Dubai’s nightlife reflects that and offers some of the best parties with DJs and musicians from around the world. However, its party scene has as many underground parties as it does fancy nightclubs and beach bars. Putting aside the unlimited number of boat, house, and warehouse parties that residents like to enjoy on a regular basis, here are some of Dubai’s biggest underground parties to look out for when you’re looking to party with the residents.

Founded in early 2012 when the house scene was still new, the Analog Room today is one of the underground scene’s signature deep house gigs. Held weekly on Thursday nights (last working weekday in the UAE), the party takes place under different roofs around the city. The Analog decks have seen everyone from resident DJs to internationally acclaimed house DJs spin for a private and unique crowd.

School
Facebook
Email
Twitter
Pinterest
Copy link
Share
Map View
Founded by long-term Dubai residents, Bad House Party is one of the only places you’ll hear a DJ play old-school punk, emo, or funk anthems. The party is well known for taking up residence in Casa Latina at the quiet Ibis Barsha Hotel, but the atmosphere is far from quiet. The monthly held nights take you back in time and will give you a chance to meet some of Dubai’s biggest punk and skater residents. Thanks to its popularity on the underground scene, the Bad House Party team have had the chance to bring UK-based artists to Dubai for a little kick to the live punk-rock scene.
Open In Google Maps
Dubai, United Arab Emirates
Give us feedback

Like Analog Room, Deep Crates was one of the first parties to start up in Dubai’s underground music scene. You’ll have to watch out for this one as parties are held only once a month, but the reggae/hip-hop-based nights are some of the best in town. Expect to party anywhere from the industrial area of Dubai to some of the oldest and quietest neighborhoods in town.

The 264 Cru is a collective of locally based Dubai artists and DJs who have come together to create some of the best underground parties in the city. Each DJ has his own style and mixes, and you can expect to hear anything from bass music to trap to old-school R&B house mixes. Recently, their spectrum has grown, and they’ve hosted internationally acclaimed DJs and artists, making for some of the best parties (and after-parties) on the scene.

Entire Photo album from the #soulectiondxb night is now on Facebook. Via @the264cru page. 📸 by @hykudesesto

New to Dubai’s party scene, Decibel is best known for organizing some of the most intense parties in town. Hosting local, regional and international DJs, the party has gained in popularity, and residents have been soaking up the drops on the dance floor. Parties are held every other weekend but are definitely worth the wait!

Coma has become Dubai residents’ favorite way to end the weekend. Once the season is back on, the party takes place every Saturday at the JW Marriott Marquis – you won’t hear about it unless you know it’s there. Coma is proof that Dubai residents don’t sleep. The party is on until 3 a.m. (as usual), and if you’re ever at a Piknic Électronik festival, you can always count on an after-party at Coma.

The name says it all – Secret Circle parties include local and regional DJs, and you can expect to see a very mixed crowd, from posh to rock, enjoying the beats. It’s a place where everyone fits in, making it one of the city’s favorite ways to spend a weeknight. Held at Level 43 in Media One Hotel, it is definitely worth checking out, especially since the party season is just about to begin.

The Music got me like.. 🙌 #SecretCircle #MyDubai #Love #Underground #HouseMusic #Techno #Family