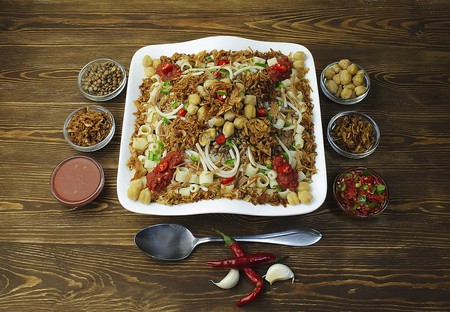 From machboos to harees, Abu Dhabi offers a range of delicious Emirati cuisine for locals and visitors alike. We count down the capital’s top picks for those interested in getting a real taste of the local culture and the flavours of the nation.

Emirati cuisine is a core feature of the local traditions and heritage. Much like the inhabitants of the nation, it reflects a mix of cultures and influences and takes inspiration from neighbouring countries such as India, Egypt, Lebanon and Jordan. The cuisine offers an insight into the history of the region; rice and pasta, for example, were introduced with the arrival of traders to the region. Furthermore, it demonstrates the natural resources and geography of the nation; for example, due to their proximity to the Arabian Gulf, much of the cuisine features seafood. Traditional dishes include maqlub, jisheid, khabeesa and balaleat.

Food is an integral part of life in the Emirates, and there is an array of international restaurants. However, as traditional local cuisine remains comparatively unknown to residents and tourists, it is important to shed light on the local eateries that offer a flashback to life in the early Emirates.

Cafe, Hotel Restaurant, Restaurant, Middle Eastern, $$$
Facebook
Email
Twitter
Pinterest
Copy link
Share
Al Fanar recreates a Bedouin-style neighbourhood complete with barasti booths, mud-brick rooms and a mini souk which diners can peruse at their leisure. Choose from an array of traditional Emirati dishes, from raqaq and balalit ma khoboz wagafi to naghar nashef and jesheed. The eatery offers a taste of the times when Abu Dhabi and Dubai were small towns on the shore of the Arabian Gulf, by incorporating the same ingredients and seasonings as were used back then.

Meaning ‘Grandmother’s House’, Yadoo’s House embodies the homely comfort of family with its comfortable plush sofas and simple furnishings. Hosting a wide range of options from grilled local fish to classic Emirati mains such as harees and a variety of machboos, Yadoo’s House lays out a veritable feast. All in all, Yadoo’s House is the ultimate destination for the capital’s foodies. 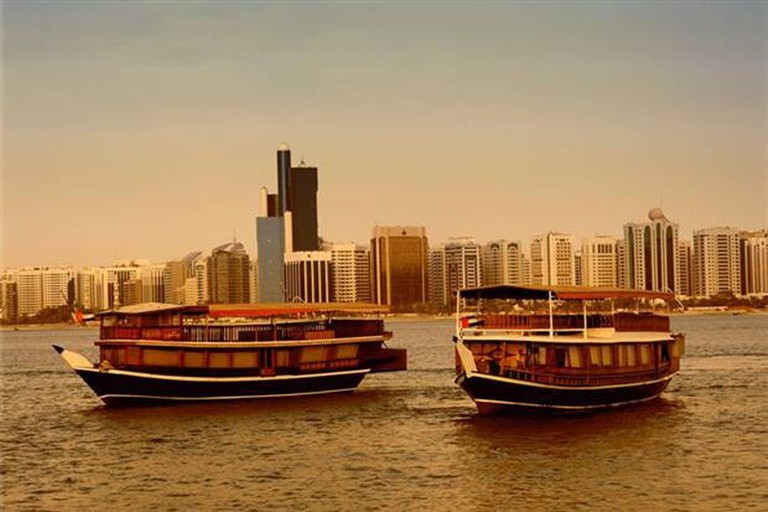 Dinner on a dhow is the perfect way to celebrate Emirati cuisine and cultural traditions. Sail along the Abu Dhabi Corniche and admire the skyline while indulging in some of the best cuisine the city has to offer. With a traditional majlis set up on the upper deck and air-conditioned seating on the lower deck, Al Dhafra Dinner Cruises cater to your every comfort. Famed for its distinctive Emirati flair, the restaurant offers classic dishes such as hamour, fragrant rice and local teas.

Founded by Shaikha Al Kaabi to celebrate the culture and traditions of the nation, Meylas serves childhood recipes crafted by Emirati mothers and grandmothers and prepared using only locally sourced ingredients. With semolina cans repurposed as cutlery holders and a front door that formerly belonged in a 1970s Emirati home, Meylas offers a nostalgic look at the time of the Bedouins. The restaurant also supports local talent by displaying totes, postcards and other gift items designed by Emirati artists. There are various delicacies you can take home with you, too, from dates to mango pickles.

Located at the decadent Emirates Palace Hotel, Mezlai offer patrons a luxury setting in which to enjoy a taste of traditional Emirati cuisine. Furnished with Bedouin emblems such as Kunjah knives, dallah coffee pots and tapestries, this award-winning restaurant is reminiscent of a Bedouin tent and pays homage to the heritage of the nation. Deriving inspiration from beloved local dishes and traditional homemade recipes, the menu incorporates staples from Emirati cuisine such as zaatar, camel meat, dates, saffron and rosewater. This is the ultimate destination for those seeking an authentic taste of the UAE. 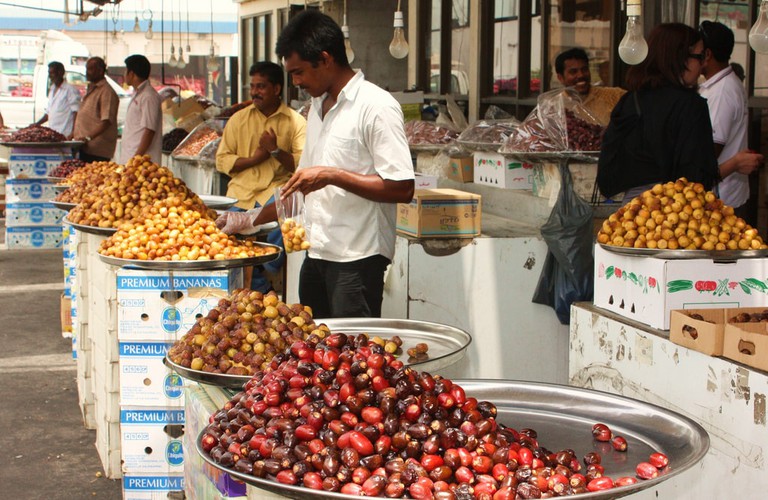 Fresh dates | © Jan Smith / Flickr
An open-air market, the Mina Dates Market is the largest market selling dates in Abu Dhabi. Dates are sourced not only locally, but also from nearby regions such as Saudi Arabia and Oman, and are sold at very affordable prices. With a wide selection of different dates, both fresh and dried, you’ll have a hard time choosing which delicious variety to take home. A tip is to sample as many types as possible before deciding on which to purchase.

Zahrat Lebnan, which means ‘Lebanese flower’, is the ultimate destination for hummus lovers and a treasure of Abu Dhabi’s dining scene. With an authentic and traditional taste, their hummus is unlike anything you’ve tried before. They also serve a range of traditional Lebanese and Middle Eastern dishes such as fattoush salad, kebabs, mixed grills and biryani.

Serving easily the best shawarmas in the city, Shish Shawerma has been taking Abu Dhabi by storm since the opening of its first branch in 2011. A tantalising blend of freshly baked bread and traditional spices, these mouthwatering shawarmas are a great bargain at only AED 10 (£2). Diners can also experience the magic in action, courtesy of their live-cooking stations. The eatery has also expanded its menu to include other delicious options such as a variety of kaakeh (a special bread with sesame seeds), salads, crepes and more.

Renowned for its fresh taste, leaving you feeling fresh and energised, Zaatar w Zeit is a Lebanese urban eatery. Incorporating a variety of traditional recipes and ingredients, the restaurant serves a range of sandwiches, wraps, salads and pizzas, to name a few. With 16 outlets in the UAE alone, it is safe to say that Zaatar w Zeit is a popular dining spot for locals, and it’s also a must-try for visitors to the country.

Another Lebanese eatery, Man’oushe Street brings you classic homemade delicacies for breakfast, lunch and dinner. Renowned for its fresh and delicious shawarmas, Man’oushe Street also offers a wide variety of other staple Lebanese dishes such as manakeesh, a’arous and kaak. To understand the true flavours of Middle Eastern cuisine, be sure to explore this venue.