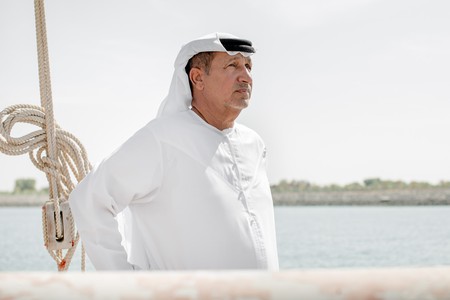 Major Ali al Suwaidi has been a seafarer since he was five years old. Raised by pearl divers, he has watched the United Arab Emirates transform from fishing villages into gleaming megalopolises, his family’s livelihood all but disappearing in the process. But, while on a pearling expedition in Abu Dhabi, he tells Culture Trip that these changes won’t stop him reviving one of the country’s oldest traditions.

On a scorching September morning on Abu Dhabi’s Yas Island, the UAE’s last pearl diver looks out over the Arabian Gulf. Wearing white diving robes and armed with a nose clip and a basket to collect pearls in, Major Ali al Suwaidi stands on a wooden boat, leading a group of excited children out to sea in search of oysters.

The practice of pearl diving, in which seafarers dive to the depths of the ocean to mine the seabed for oysters, has been in Major Ali’s family as far back as he can remember. Born in Dubai in 1957, he began going out on the boat when he was just five years old. “I learned from my father and grandfather,” he says. “They used to call me ‘the English boy’ because I was always in the sun, so my hair became brown.” At 62, he still dives regularly, but has lived to see the practice that was once the main livelihood of the United Arab Emirates dwindle away.

“There’s been a big change since the oil came,” he says. Looking across the water to Abu Dhabi’s skyscraper-laden landscape, it seems like an understatement. It is hard to imagine the Emirates as they were when Major Ali was a child: a series of humble fishing villages known as the Trucial States, inhabited by fishers who dived for pearls and Bedouins who roamed the desert. 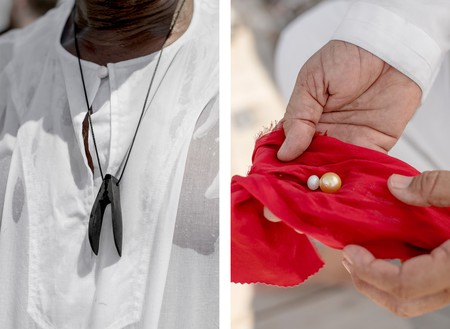 These traditional nose clips are used by pearl divers in the UAE; glistening pearls are found on the sea floor of the Arabian Gulf | © Alex Wolfe / Culture Trip

After the 1970s, the region began to change; Major Ali’s hometown of Dubai is now a bustling business centre with a population of more than 3 million, and Yas Island, a popular diving spot in the neighbouring emirate of Abu Dhabi, is now part lavish theme park, part beach club, part five-star resort.

Pearl diving has existed in the Gulf since medieval times, when a diver and a hauler would head out together on a boat. One would clip his nose while diving to the depths of the sea in search of oysters, and the other would pull him back up using a weighted rope.

Sometimes boats of up to 100 people – divers, haulers, chefs and other crew – would head out to sea during the pearling season in search of bountiful beds of oysters. The journeys were often fruitful – divers collected almost a billion pearls a year at the height of the industry in the early 20th century – but they were certainly not glamorous. 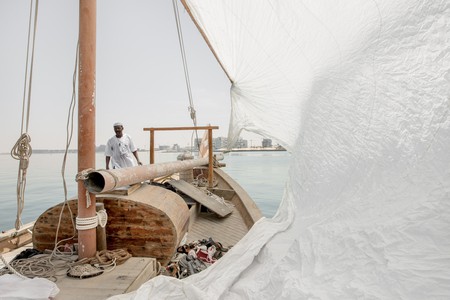 “It was a nasty job,” says Robert Carter, an archaeologist and academic who specialises in the history of pearl fishery. Divers, who were often slaves, would sometimes hold their breath for more than two minutes, plunging to depths of up to 20 metres (66 feet), in water that was freezing cold, even in the height of summer.

The practice of pearl diving continued almost unchanged for hundreds of years, eventually becoming a major source of income in the 19th century. Surprisingly, though, it wasn’t the discovery of oil that saw the demise of this industry that had thrived for so long. After a boom in the 1880s, the great depression saw a huge crash in the pearling market. “It never came back,” says Carter, “because, pretty much simultaneously, the cultured pearl came in.” 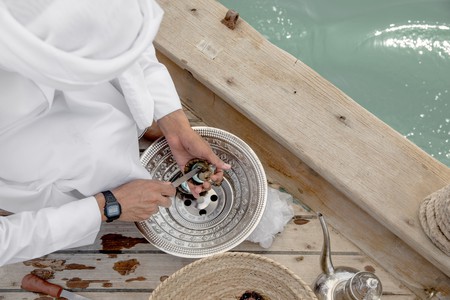 Pearl culturing, in which oyster farmers artificially induce the creation of pearls, “reduced the allure and the cachet of natural pearls,” says Carter.

It was in this changing climate that Major Ali was born. As a child and then as a teenager he went out on the boat with his father and grandfather, and he is nostalgic as he talks about finding his first pearl aged 15 (“It was the biggest one I’d ever seen!”). He tells other great stories of long sea journeys in search of oysters, chanting traditional pearling songs during months-long stints out on the water.

In the 1960s, the UAE began to receive direct oil revenues – what Carter calls the “final nail in the coffin” for pearling. Major Ali moved to the United Kingdom in the following decade, graduating from the Royal Military Academy Sandhurst. He later worked for the SAS, and after that moved to Brighton, where he lived for two years. “I am also a professional footballer!” he exclaims. “For ten years, I played in England, Germany and other parts of Europe. And now I am helping the environment.” 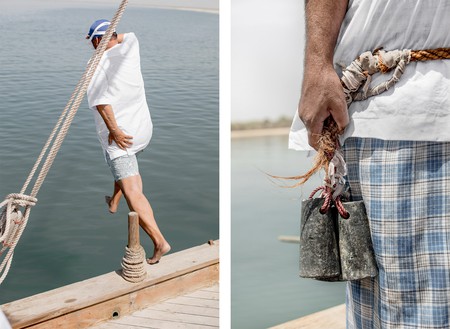 He mentions it almost as an aside, but it is clear that Major Ali was always destined to be by the sea. After his time in the United Kingdom, he returned to the UAE, where he became President of the Emirates Marine Environmental Group, an NGO, while regularly going back out on the boat to dive for pearls.

When asked how many other pearl divers there are in the Emirates today, he laughs. “Nobody at all, only me! There’s one guy in Ras al Khaimah who does pearl culturing. He is a good guy, but I don’t like culturing; I like the natural way.” 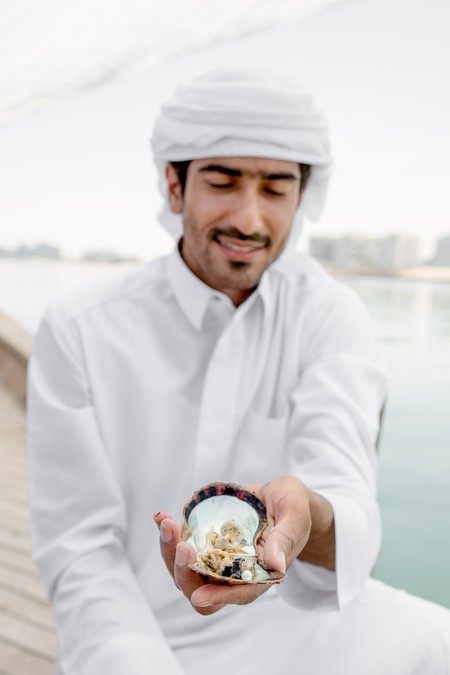 Today, Major Ali’s ambitious goal is to single-handedly revive the pearling tradition – the natural kind, of course – in a country long transformed. He organises outings for tourists and businesses, and teaches more than 2,000 schoolchildren a year how to clip their noses and dive into the sea for oysters (under, it must be said, much safer conditions than those braved by pre-19th century divers).

“We run an education programme for the kids – everyone, not only the local kids,” he says. “In Dubai we have 150 nationalities, and we care about all 150. We believe these children are the future.” 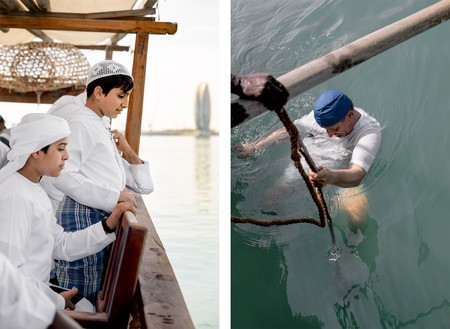 Diving with a group of 20 children today, Major Ali watches from the surface of the water as they dive in, all dressed in traditional diving robes. He guides them down via a weighted rope, pulling them back up after a few seconds, grinning, their hands full of oysters. He helps them sort through their findings and crack them open in search of pearls at the end of a long day on the boat. “They’re not allowed telephones [on the boat], not allowed McDonald’s or KFC, but they love it, because nature is inside all of us,” he says.

Going out on the boat with Major Ali certainly feels like a window onto an ancient tradition, and is always a lucrative experience. “Nobody does pearl diving any more, only me, so you find really big pearls!” he says, laughing. But, sailing away from Abu Dhabi’s busy skyline into the vast waters of the Arabian Gulf, it is also clear that he sees the practice as more than a nostalgic hobby. 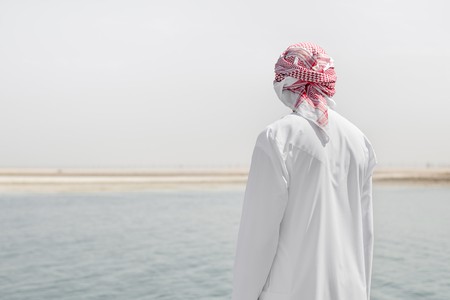 While he loves the diversity that economic prosperity has brought to the region, he is sceptical of the change. “Our country is not a country that has plants and food – we have desert and salt water. It’s very hard to live here,” he says. “That’s why I try and keep the tradition alive, because [the oil] can go any time, but nature will always be there.”