Myneandyours, a street artist is known for “stickers,” wheat paste and clouds – all in a recognisable shade of blue. Based in Dubai but raised in London, Myneandyours was influenced by punk music and inner-city skateboarding, both of which contributed to his later vocation. Now a full-time artist, Myneandyours recently completed a mural in Tunisia as part of the #Djerbahood project. Culture Trip caught up with the artist to talk street art, mythology, and technique. 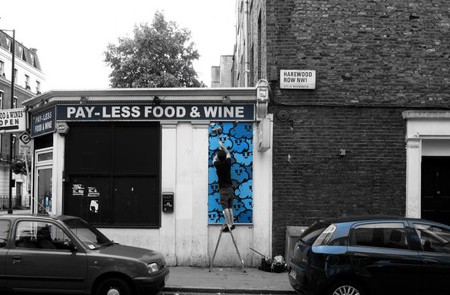 DL: Congratulations on your recent trip to Djerba. Tell me about your experience.

MY: We painted in Erriadh, a small town outside the city centre. The temperatures were so boiling hot that all the work was done at night. When I was painting I had the owner of the house (who had offered his wall to me), his brother and son bringing me food throughout the night. I painted from 9pm-9am. The owner’s brother and teenage nephew dragged out a mattress, played Umm Kulthum, chain-smoked, and ate pistachios to keep me company the entire time. 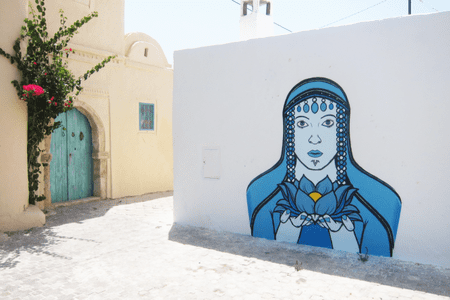 DL: You ultimately chose to paint a mural featuring a local Berber woman. Why did this image feel like the right choice?

MY: In the Odyssey, Odysseus stops along his journey back to Troy on an island that is now believed to be Djerba. The island is inhabited by the Lotus Eaters who feed on the fruit from the lotus flower, which makes them sleepy, apathetic, and unable to get through the day. I wanted to leave something behind that related to our local hosts, so I chose to paint a local Berber woman with a lotus flower.

DL: Why do you return time and again to the colour blue?

MY: I wanted to create an identity and consistency between my works. I began with the blue cloud, which I incorporate into almost everything I do. I don’t like to sign my work so the blue is in lieu of my name in most cases. 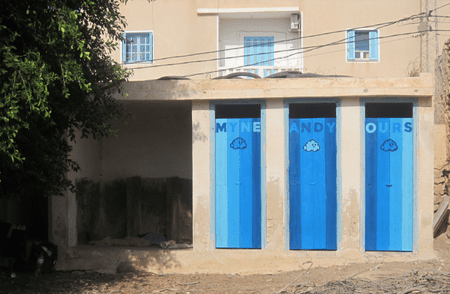 DL: You’re best known for clouds. When did you draw your first cloud?

MY: About 7 years ago, it started out as a doodle for a friend who wanted to get a tattoo. Then I started putting it up on buildings and making stickers of the cloud, which I’d put up all over London. My mom is so cool that she pastes my stickers all over New York City. The symbol means different things to everyone, but from a scientific perspective, through the cycle of condensation we are all connected to the clouds and the environment.

DL: That’s the beauty of street art. You’re affecting people without really realising it and the work takes on a life of its own, long after you’ve left it.

MY: Some pieces I put up just to be provocative. I come back and they’ve been painted over or removed. I find it inspirational that my work caused someone to think and take action.

When I go out at night, I pre-paint 3 meters on paper. I take wheat flour paste, a huge, extendable brush and I climb a building and put the work up. I pre-print because I don’t want to rush or make a mess and if someone doesn’t want it to be there, it’s just paper and anyone can take it down. I like that it’s temporary. 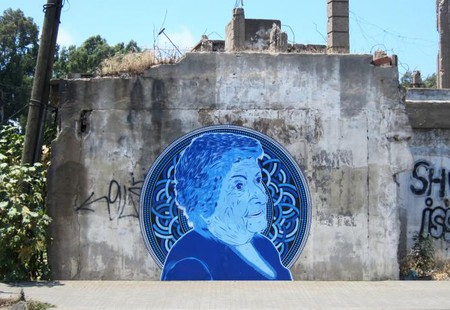 DL: Would you call yourself a street artist?

MY: Graffiti is something different from street artist. Those artists [graffiti artists] are writers who are speaking to one another. It’s about crazy skill and getting heard. Those guys are amazing but that’s not me. In Dubai I only paint outside legally, I knock on doors and ask permission. I’m searching for a big wall, something dirty and grimy that I can hit here.

DL: You relocated to Dubai last year and became a full time artist. What was your previous day job?

MY: Back in London, I used to have a day job in an office directing marketing for a certain pizza franchise. I sat in a cubicle. My wife Reem would compare me to Superman. I’d wear a suit and tie by day but at night I’d sneak out with my bucket and paper to scale a building. 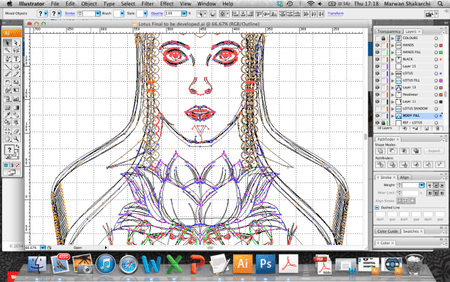 DL: Do you sketch your work out beforehand or encounter it for the first time when you’re face to face with a wall?

MY: If you analyse my work on a mathematical level it makes sense. It becomes like an OCD thing – I’m working 6000% on the screen. No one will ever see what I see, but I’m doing it for me because I want to produce something that is perfect. So many artists are more spontaneous and just throw paint on a wall and see what happens. That’s amazing, but I’m not like that. 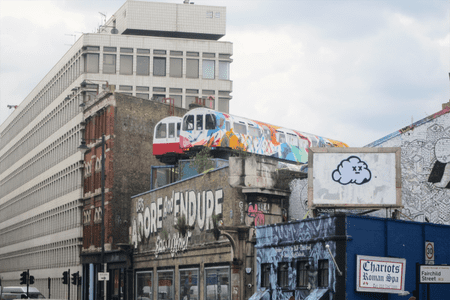 DL: Let’s talk stickers. Your cloud stickers are all over cities in the UK and the Middle East. How did you become a sticker artist?

MY: When I’m out and walking down the street, holding my wife’s hand on the way to a restaurant, my mind is still with Myneandyours, and I am always hiding a sticker in my other hand, looking for right place to attach it. 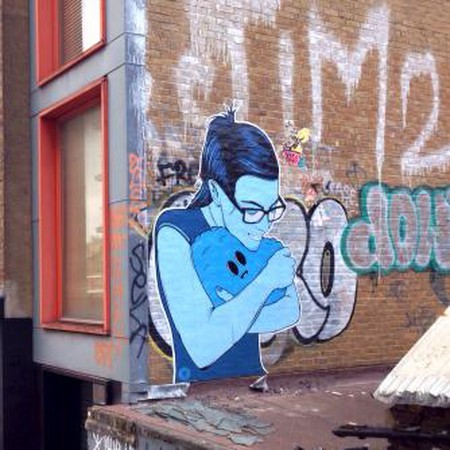 DL: Does that come from a desire for people to see your work?

MY: It’s not so much about making people see my work, but about awakening a sense of wonder for our environment. If someone sees the cloud pasted to a building and then again as a sticker on the street signal, s/he will begin to question how it got there and what it means. It’s not advertising because the cloud isn’t pushing a product or idea and there is no signature or website. I’m hoping to make people realise how frequently we’re just pushed into an idea without questioning what is really behind it.

DL: Where did your tag, Myneandyours, originate?

MY: I create the work for me: I put it outside for you. But it’s also about how this life is ours to do with what we want. You don’t have to sit in a cubicle all day if you don’t want to. 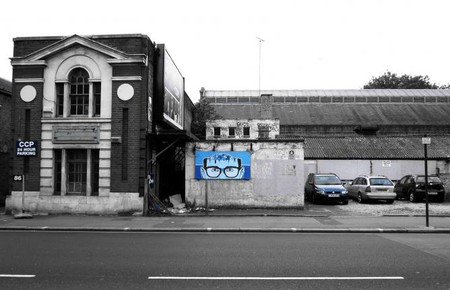 DL: Many of your pieces are installed several stories up on a building or billboard. Is it dangerous for you to hang the wheat paste so high off the ground?

MY: In London the best time to hit a wall with wheat paste is about 4 in the morning when people are still in bed. I sometimes find myself hanging upside down over a ledge alone. I attach the bucket to a 50-meter rope then climb the rope and pull it up.

For commissioned walls everything is first sketched out using Adobe Illustrator. Then I use an MTN 94 can of spray paint with a combination of stencil work with freehand work to get clean lines. I can enjoy the luxury of putting it up over the course of a full day or two and having someone along to keep me from falling.