IMG Brings A New World Of Adventures To Dubai

Dubai is set to put itself on the map twice in one week; while one side of town sees the opening of the Dubai Opera, the other side is heading down to the IMG Worlds of Adventure amusement park! Why the big deal, you may ask? Well, only because it’s the world’s biggest indoor amusement park – which means summers in Dubai just got a whole lot cooler!

On August 31st, IMG Worlds of Adventure opened its doors to the public and let the adventures begin. Located in the suburbs just 20 minutes away from downtown Dubai with several means of public transportation heading straight to its doors, visitors and residents will have easy access to the park. Tickets are available at the door for AED300 for adults and AED250 for children under 1.2 meters tall. Like all theme parks, rides will have a height limit, so the ticket prices will vary accordingly.

Expect to find everything at Worlds of Adventure, from kiddie rides to thrill rides to a haunted house. In short, this will be an adrenaline seeker’s dream world – about 30,000 adrenaline seekers per day, to be exact! The park is divided into several adventure zones: one each for Marvel and the Cartoon Network; IMG’s own creations, the Lost Valley and IMG Boulevard; and, of course, an extensive array of food and beverage outlets, gift shops, and even a cinema to hang out in.

Comic book readers can rejoice at the Marvel zone. This zone will take you on rides like Avengers Battle of Ultron in 3D, featuring characters such as Iron Man, Thor and Captain America. Since this zone is themed like the streets of New York City, you can even grab a bite at the Chinese place around the corner: Chang’s Golden Dragon! 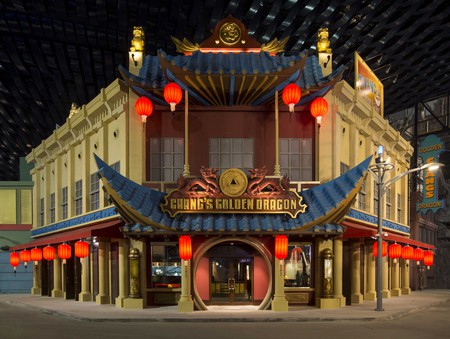 The Cartoon Network zone will feature some of your favorite new characters. Sure, you’re going in for the kids, but let’s face it, you can’t resist a Power Puff Girls ride regardless of your age! Rides will feature characters from shows such as Ben 10, Adventure Time and Gumball. Kids will also have a chance to meet their favorite characters during live performances or just wandering around, so make sure you’ve got your camera ready.

The dinosaur-themed Lost Valley zone is not one to miss. The Velociraptor roller coaster goes from 0 to 100 kilometers an hour in 25 seconds and will literally take you from the cool jungle out into the Dubai desert…if you dare.

Finally, IMG Boulevard will be the place to hang out (or hide out) and grab a bite to eat, catch a movie or pick up souvenirs at the gift shops. This zone will feature over 20 restaurants and shopping outlets to visit, as well as a state-of-the-art cinema if you’ve got a day to kill. 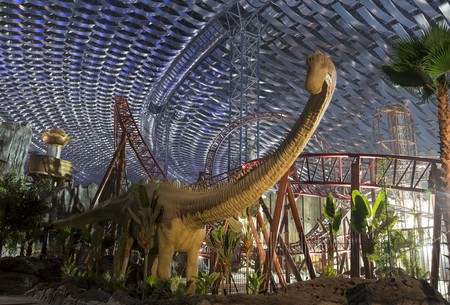 Lost Valley Courtesy of IMG Worlds
Give us feedback