Here's How Dubai is Trying to Be More Environmentally Friendly 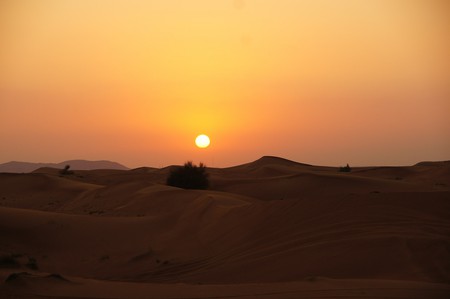 Dubai has been taking several steps in order to become a more environmentally friendly city. The Emirate has recently announced it will be introducing 500km of bicycle routes by 2020, and now it plans to built the largest concentrated solar power (CSP) project in the world. This important plan will be perfect for creating energy for the city, which is sunny year-round and will be using that to its advantage in the near future.

Sheikh Mohammed bin Rashid Al Maktoum, the ruler of Dubai and Vice President and Prime Minister of the UAE, announced on Twitter on September 16 the Emirates’ plan to build the largest concentrated solar power plant in the world. The project is a massive milestone for Dubai, which has recently been taking active steps in order to become a more eco-friendly city. The Sheikh’s series of tweets shared what the plant is imagined to look like, as well as important details about the project such as price, size and what changes it plans to bring.

Today we launched the world's largest concentrated solar power plant in one place; an AED14 billion project with a capacity of 700 MW. pic.twitter.com/YWs2hh8RDs

Dubai plans to generate 75% of its energy using renewable resources by 2050, and this CSP plant will be responsible for that. The Mohammed Bin Rashid Solar Complex extension project is estimated to cost AED 14 billion and include the tallest solar tower in the world, at 260-meters tall. Another feature that makes the solar plant special, although more expensive, is that it will be able to store solar energy once the sun has gone down, which is not possible through PV (photovoltaic) technology.

The project boasts a 260 meter solar power tower, and is part of our mission to rely on renewable energy for 75% of Dubai's needs by 2050. pic.twitter.com/9pWtOH3KdT

Dubai dreams of having the smallest carbon footprint in the world by 2050, which makes the creation of this CSP plant so crucial for the city’s future. The Dubai Electricity and Water Authority (Dewa) has chosen Saudi Arabia’s Acwa Power and China’s Shanghai Power to build this epic extension to the already existing solar plant, which is more than three times larger than the initial plan the city had. Considering the strong sun Dubai has during the entire year, this is the ideal way to generate energy for the Emirate, in order to benefit not only Dubai itself but the rest of the world by reducing carbon emissions. This means the city will soon not only be known for being home to the tallest building in the world, but for setting an example in protecting the environment.

This is one element of the Dubai Clean Energy Strategy, which aims to achieve the world's smallest carbon footprint for Dubai by 2050. pic.twitter.com/GxRm4kvx2I