Here’s Everything You Need to Know About Emirati Clothing 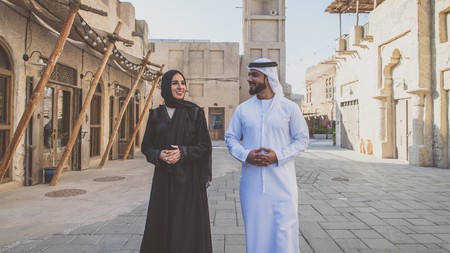 Emerati clothing is a point of national pride – a symbol of the history, culture and religion of the United Arab Emirates. If you’re heading to the UAE and wondering about clothing etiquette or just curious about Emirati national dress, here’s everything you need to know.

Emirati men wear a long, single robe called a dishdasha or kandura. In Saudi Arabia, this is also called a thawb. This tends to be white as this is the coolest colour to wear in the desert heat, but brown, black or grey are seen more in winter months. Men may own more than 50 kanduras and change them regularly during the day for an ever-fresh look. The Emirati version differs from the garments worn in countries such as Saudi Arabia and Kuwait, as it is collarless and has subtle embroidery on the sleeves.

The kandura is worn with a ghutrah headdress made of cotton. These were traditionally worn to protect the head and face from the desert heat and sand. A shemagh is similar to a ghutrah, but decorated with white and red checks and is often made of thicker material. Although this style originated in countries such as Saudi Arabia, today many younger Emirati men prefer the more colourful headdresses. On formal occasions, this is secured with an agal, a black rope once used to tie a camel’s feet together at night.

Underneath the headdress, Emirati men wear a ghafiya, similar to a Muslim prayer hat and heavily embroidered although hidden from sight. Other traditional items include the faneela, a white vest worn beneath the kandura, and the woozar, an undergarment tied around the waist. At festivals, significant dates and in the presence of someone important, Emirati men may also wear the bisht, a dark-coloured cloak over the kandora.

In contrast to the lighter colours worn by men, Emirati women wear a long flowing gown in black. This is known as the abaya and is worn over everyday clothes for modesty. It is worn across the Islamic world and covers the whole body except the feet, face and hands. It is usually made of crepe or cotton, while more modern versions can be heavily embroidered, designer or very expensive.

Like men, women also choose to cover their head according to religious custom. There are several types of headdress – known as hijab – including a shayla, a light scarf that covers the hair and a gishwa, a thin veil that covers the face but the wearer can see through. A niqab is another option and covers the face entirely with an opening for the eyes. Finally, the Gulf burqa is a mask worn over the eyebrows, nose and upper lip, and was believed to protect a woman’s face from heat and dust. Today, they are rarely worn by younger women though they may be seen at weddings.

Henna is also important to Emirati women. Originally worn by brides to bring good luck, henna body art is now often used to decorate a woman’s hands and feet for other special occasions including religious holidays.

How to dress as a tourist in the UAE

Though visitors to the UAE are not expected to be completely covered in the same way as an Emirati, it is advisable to dress modestly. This means women covering from the shoulders to, at least, the knees and not wearing anything too tight, short or revealing. It is common to be stared at if not dressed appropriately, which can feel uncomfortable. In extreme cases, the police may instruct you to dress more suitably.

It can also be useful to carry a light scarf in case more cover is needed, although a head covering is generally not necessary unless entering a religious or government building. Places of worship and historic neighbourhoods also require more conservative clothes, including covering the arms, shoulders and legs. Men should also cover from the shoulders to the ankles in these areas.

Tourist hotspots including hotels, nightclubs and beach clubs are often more relaxed, although revealing swimwear may also be frowned upon. Remember to always pack a cover-up to wear when leaving the beach to eat or shop nearby.