Hazem Mahdy is an Egyptian artist based in Sharjah in the United Arab Emirates, whose monochrome digital works are influenced by Islamic geometry, an active meditation practice, and fractal theory. Here Hazem discusses his practice and Atman series with Danna Lorch at Carbon 12 Gallery in Dubai. 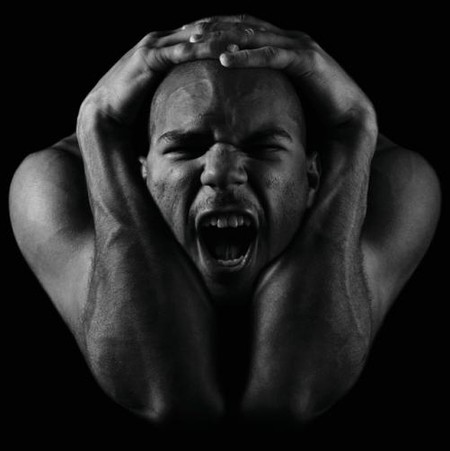 Hazem Mahdy and I sat facing one another in two leather swivel chairs parked in a corner of Carbon 12, a gallery set in an industrial warehouse in Dubai’s emerging arts district of Alserkal Avenue. The monochrome mandalas comprising Atman, his most recent solo show at Carbon 12, surrounded us in the otherwise white cube of the gallery space. Initially Hazem came across as shy and I fidgeted awkwardly, flipping through pages of questions I’d prepared in a dog-eared notebook. I had to give him my Dictaphone to hold because his voice was too low for the recorder to pick up otherwise. Then I brought up the subject of meditation and suddenly we connected, skipping past the small talk and right to the heart of his practice — transcendence. Meditation is at the core of who Hazem is as a human being and also central to the process he used to createAtman.

He casually speaks of an evening he was meditating in a tent when suddenly ‘I was underwater being pulled from the center of my chest towards an island and I looked up and saw the surface of the water breaking overhead. It was so hyper-realistic’ Another time he visualised a tree with branches made of arms that were gripping hold of one another urgently. As a displaced Egyptian based in the emirate of Sharjah, Hazem has never made his home in Egypt and much of his earlier work explored that experience.

Using himself as subject, a 2009 portrait captures the essence of pure rage, as the art grips his bare head and opens his mouth in an imaginable primal scream, his veins and tendons ripping with emotion. That discomfort and fury has been processed and it is arguable that the artist is drawn to meditative practice for its ability to ground the body to a physical point that transcends national borders. 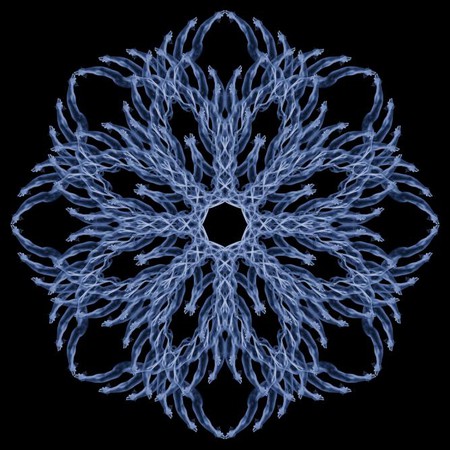 The show is titled Atman in reference the Sanskrit term for the purest form of the soul and technically this is a series of self-portraits made up of digital repetitions of images of the artist’s own arm. The object of meditation is to turn off the mind’s constant banter and enter into a state of thoughtlessness. Hazem conceived the series in his bedroom while listening to the womb-like sounds of the Divine Mother Mantra on repeat. He is brave enough to admit the one thing that would make most artists and gallery directors cringe: ‘As bad as it sounds, almost no thought went into the creation of this work. These are mandalas and constructing or looking at them is a form of meditation.’ He says you can call them ‘automatic art.’ The juxtaposition between meditation-based photographs created using the latest digital manipulation software on the computer is what makes this series interesting.

Despite the ‘thoughtlessness’ in process, there is actually a significant amount of philosophy standing behind the photographs, which have been deeply influenced by Benoît Mandelbrot’s theories on fractals, patterns that re-appear infinitely in nature. Hazem was first introduced to the concepts by a Nova documentary gleaned from YouTube that proved that certain patterns recur in tree branches in a precise mathematical formula. He has come to understand that, ‘Human beings are made up of fractal cells. If you look at the rings of an onion’s skin, the shapes on a turtle’s back, or the patterns in cauliflower you are actually observing fractals.’ It is clear that the mandalas are composed of formulaic fractals that echo the artist’s connection to a higher form of self and to the wider universe. The relationship is not always peaceful; the jagged edges on a few of the photographs denote tension, confusion, and even anger. 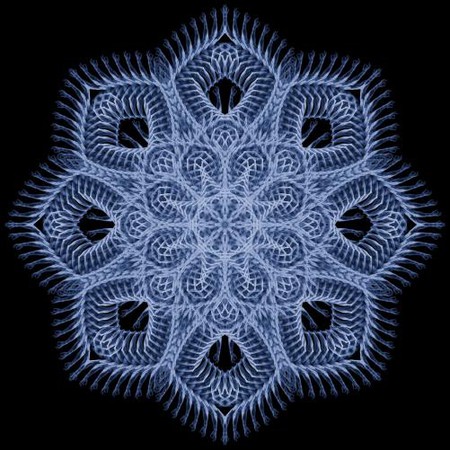 In many of the images, the hand is positioned in a mudra, a symbol of understanding, peace or prosperity. In one, he is holding a vajra, a Tibetan Buddhist tool used in meditation. He says, ‘Tibetans believe that life is one phase and death is another, and they never make a separation between life and death. So by shaking the vajra back and forth, you are acknowledging that you will not be too attached to life or feel great fear about the death that will come as your next step.’

Hazem’s first solo show at Carbon 12 in 2012, One Wahed, Yi, Eins, probed the concept of ‘one’ as an obtuse entity that the body, mind, and spirit channel all energy towards, uniting within. By arranging digital photographs of his own outstretched hand in various recurring patterns, the artist expressed a fundamental belief that everyone and everything in the universe is interconnected. From far away, the kaleidoscopic images reflect Islamic art’s typical geometric patterns, symmetry, and simplicity. However, when viewed at close range it becomes clear that these are bodily self-portraits, and although Islamic art is certainly an influence, these works part from that tradition by making the flesh so central. 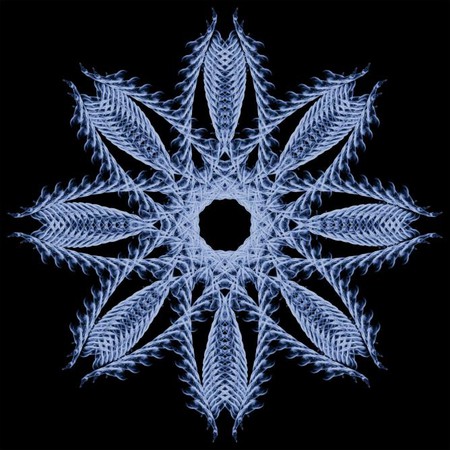 Both Atman and One, Wahed, Yi, Eins, Alpha contend with the tension between the body and the spirit in monochrome. Artists often go through periods in which they work in a single colour. Hazem is ‘incredibly drawn to blue, which corresponds to the throat chakra and the need for expression. Blue was my comfort color for a long time. Now it’s gray. If I’m not wearing gray I feel slightly agitated.’ The black, white, grey, and blue present in the mandalas that comprise Atman are a kind of medical x-ray of the soul.
By Danna Lorch