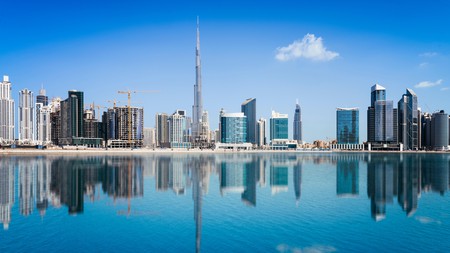 In Dubai, bigger is always considered better. Home to ultra-modern architecture, traditional markets and a grandiose shopping mall, the United Arab Emirates’ most populous city is a trendy, leading metropolis in the Middle East.

It’s hard to believe that Dubai’s story began 4,000 years ago as part of a trade route. Perched on the Persian Gulf coast, the swanky city was once a fishing village in the 18th century, where divers regularly risked their lives by pearl diving in the seabed. It was the most lucrative profession in the UAE at the time and took place during the summer months when the water was warm enough to dive in. Dating back more than 7,000 years, the practice declined in the early 1900s when the Japanese discovered a way to produce artificial pearls. As Dubai started to generate revenue from the oil trade in the 1970s, the city began its transformation and became the modern metropolis of today. Thanks to its futuristic vision, Dubai has established itself as an essential hub in the Middle East.

A part of the Burj Khalifa complex, the Dubai Mall is as extravagant as you can imagine. Home to more than 1,300 stores, it offers an unparalleled retail variety with a selection of local and international luxury brands. The four-storey shopping centre, which opened in 2008, prides itself in providing a unique experience regardless if you’re there to shop or not. In addition to the 200-plus food and beverage outlets, you can also visit the on-site VR Park, a 22-screen cinema, a Rainforest Cafe, an ice rink, KidZania – an interactive children-size theme park – and the Dubai Aquarium and Underwater Zoo. Enter the 10m-litre aquarium tank and wander around the 270-degree tunnel as more than 140 species – including 300 sharks and stingrays – float around you. 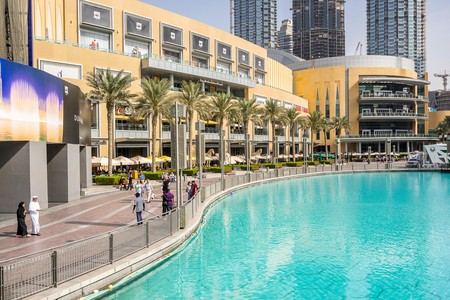 Gleaming skyscrapers dominate Dubai’s skyline, but no place will give you a better view of the city than the Burj Khalifa. Located in Downtown Dubai, the high-rise with a cloud-piercing height is the city’s most famous attraction. Inaugurated in 2010 and standing at a staggering 829m (2,720ft), it’s the tallest building in the world and offers a 360-degree view of the region. Admire the city’s landscape at soaring heights as the lift takes you up to At the Top, a sky lounge on the 148th floor with an observation deck and an outdoor terrace at 555m (1,821ft). Immerse yourself in the city’s unique cityscape while sampling traditional Arabic coffee paired with dates – the sweet go-to snack in the Middle East. 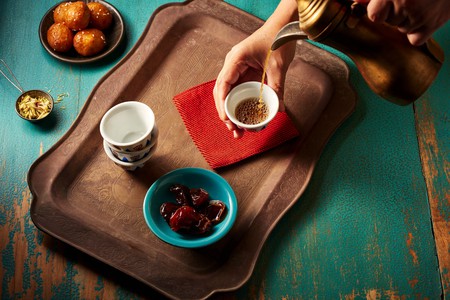 Dubai is a bustling metropolitan city and home to a large number of migrants from all over the world, and as a newcomer, one of the best ways to get to know a city is to learn about its culture. In an attempt to build a bridge between tourists and residents, a non-profit organisation was created in 1998 to promote Emirati culture. The Sheikh Mohammed Centre for Cultural Understanding, in the historic neighbourhood of Al Fahidi, invites you to engage in conversations with local Emiratis and take part in a range of activities. 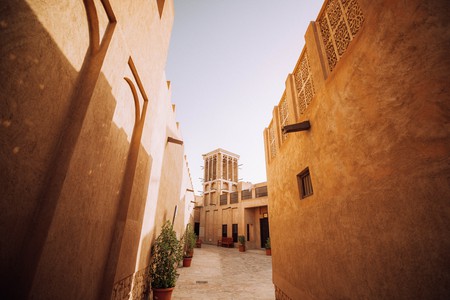 As you enter the centre’s wind tower house, take a seat on the colourful Bedouin-style carpets and pillows and make yourself comfortable as you listen to the fascinating stories told by the host while indulging in mouth-watering traditional dishes. After your visit, wander around the neighbourhood, which gives a glimpse into what life looked like in 19th-century Dubai. The well-preserved heritage site features 50, beige-stone buildings that offer a plethora of cultural activities, art galleries and museums.

Have a Bedouin experience

The Bedouins are the oldest inhabitants of the Arabian deserts. The nomadic group comprises tribes who often relocated using the sun and stars for direction. One of the best ways to learn about their history is to take part in a Bedouin experience. The tour takes place at the Al Marmoom Desert Conservation Reserve – the UAE’s first unfenced nature conservation reserve – approximately a one-hour drive from Downtown Dubai. Jump on the camel caravan with the help of your guide, and enjoy the scenic journey as you’re taken across the desert with nothing but dunes in sight before arriving at a replica of a Bedouin village. There are different stations to give you a window into ancient Bedouin life, with local Emiratis demonstrating how the Bedouins survived in the desert. 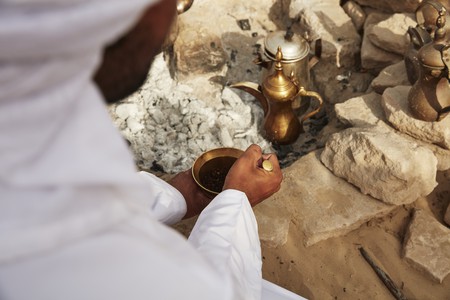 Despite Dubai’s glitzy facade, many parts of the city still have a traditional feel, which you can uncover with Arabian Adventures. The Bur Dubai, also known as Old Dubai, is among the city’s oldest neighbourhoods and one of the main commercial districts along the Dubai Creek. The bustling area is somewhat chaotic, with the sounds of large crowds – made up of resident and tourists – inevitable. However, the district is perhaps one of the most fascinating parts of Dubai, with traditional souks being the big draw, so take your time exploring. The Textile Souk’s spacious alleys are overflowing with street vendors selling mainly fashion necessities, such as scarves and clothing, but also colourful hand-painted ceramic plates made from camel bones. 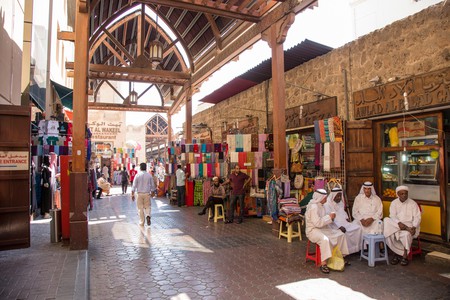 On the other side of the creek, in Deira, you’ll find an aromatic haven brimming with every type of spice and herb imaginable. The Dubai Spice Souk is home to an array of small shops that line narrow alleys and sell colourful seasonings at a low price. A few minutes’ walk away, you’ll find a large variety of gold shops at the city’s most popular market, the Gold Souk. The covered walkways are filled with visitors and endless street vendors trying to lure you into their shops to purchase gold, silver and other types of jewellery. Despite the commotion, the souk is worth a visit, as it offers an authentic experience.

Use an abra to travel from Bur Dubai to Deira. The small public water taxi is the fastest and cheapest way to get around and can carry up to 20 people. The ride is short – you’ll be on the other side of the creek in a couple of minutes – but it’s worth the trip to experience a different side of Dubai.

Dubai was scheduled to host this year’s Expo, a world exhibition that will bring 192 countries together to showcase each nation’s talents. However, due to Covid-19, the mega event has been postponed and will take place between 1 October 2021 and 31 March 2022. Expo 2020 Dubai will feature newly constructed facilities that have not only been built for the event but also the future and will demonstrate the UAE’s development, cultural diversity and tourism opportunities.

Linda Konde was hosted by Dubai’s Official Tourism Board. She stayed at the Address Fountain Views, an upscale city hotel with modern design, in the heart of Downtown Dubai, and the Vida Creek Hotel, a charming boutique hotel with stunning views of the city’s skyline.