Dubai’s Tourist Attractions Will Be Patrolled by Robot Police 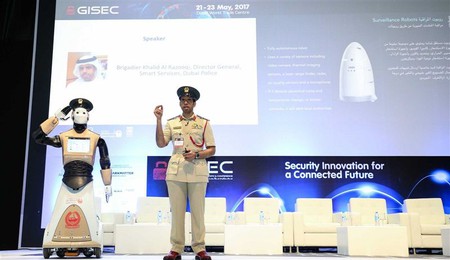 Dubai, never a place to shy away from an outlandish idea, is to introduce a police robot to tourist attractions and malls.

The real life robocop won’t be chasing down criminals and making arrests just yet, however. The first job for the one-android police squad will be to stand in malls and tourist attractions so people can tap a touchscreen on its chest to report a crime, pay a traffic fine, or get information in Arabic or English.

“This is the official launch of our first Robocop,” said Brig Khalid Al Razooqi, Dubai Police director general of smart services in a statement reported by Dubai Media Office. “Now most people visit police stations or customer service, but with this tool we can reach the public 24/7 and it won’t ask for any sick leave or maternity leave.”

The robot also has built-in cameras that will stream directly to the Dubai Police command center.

“It has a smart intelligent system so it can protect people from crime, because it can broadcast what is happening right away to our command and control centre,” said Brig Al Razooqi. “We are also working on facial-recognition systems.” 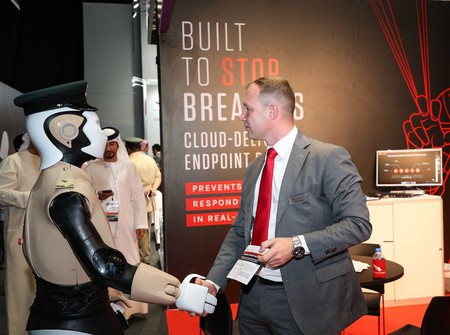 If that doesn’t exactly paint the dystopian picture you were looking for, Dubai police has said the robot will pursue suspects and arrest parking fee dodgers in the future. In fact, some of the future plans for police robots are terrifying. The Emirate plans to build the world’s largest robot which can run at 80kph (nearly 50mph).

Dubai Police aims to make around 25 percent of its force robotic by 2030, allowing human officers to focus on crime prevention. “We are not going to fire our police officers by replacing them with this tool but with the number of people in Dubai increasing, we want to relocate police officers so they work in the right areas and can concentrate on providing a safe city,” Brig Al Razooqi said.

Dubai is making a concerted effort to be a city of the future: recently, plans were unveiled for a driverless flying car in the Emirate.