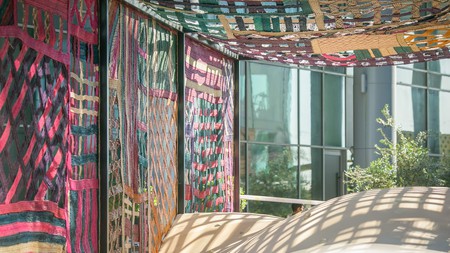 The Abwab Pavilion: Sa’af by Azaz Architects was made through traditional palm-frond weaving | Courtesy of Dubai Design Week

With innovative designs and the use of unusual materials such as coffee, sand and even salt, the annual Dubai Design Week showcases the future of design from the wider Middle East region. It could also hold the answer to questions of how to design for a rapidly heating world. 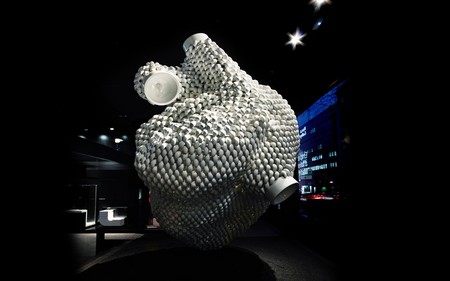 The Dubai Design District is located close to downtown, across the Dubai Creek that was once at the centre of the city’s economy as the location where pearling expeditions took off from and returned to. Today, trade in Dubai focusses on other commodities, including one that’s a relative newcomer: design. In the sandy desert, the district stands out, its shiny buildings clustered together on the shore of the creek. Creative businesses populate the neighbourhood, which opens up for the rest of the world once a year when Dubai Design Week (DXBDW) showcases emerging and established designers from the wider region. 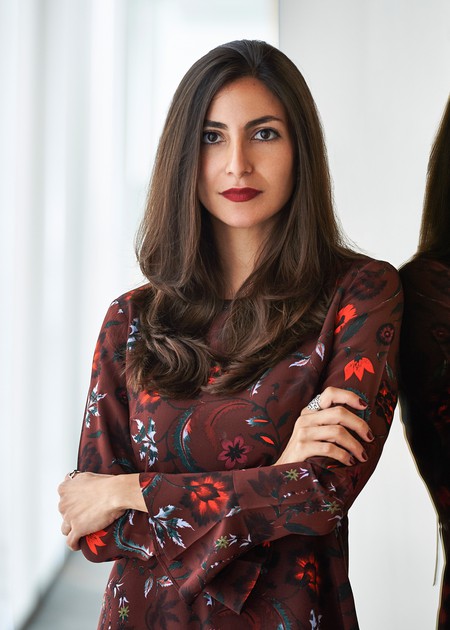 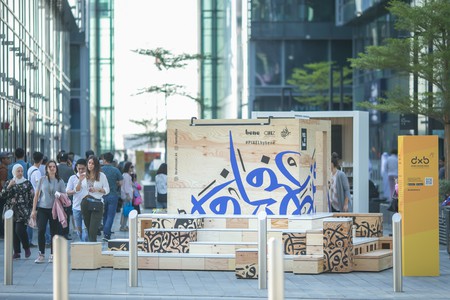 The festival started in 2015 and has played a huge part in promoting design in the region, as it has matured and come into its own. “There’s a more thoughtful approach and effort to the projects themselves, and the brands that get involved are less commercial and happy to work with local and regional designers,” Kashkoush says.

At the 2019 edition, the collaborations between big global brands and local designers resulted in some fascinating projects. Umbra – a gateway installation made by Spanish wood solutions manufacturer Finsa, together with Dubai-based multidisciplinary design studio Tinkah – lent visitors much-needed shade as they entered the area and nicely exemplified what Dubai has to offer, design-wise. “They’ve taken something traditionally Middle Eastern, the mashrabiya, and updated it in a way that’s a lot more simple. I like that it’s a fresh take on something quite ancient and rooted in the region. There’s a familiarity, but it’s also the way that I want the Middle East to be portrayed, as a space that’s moving forward, an identity that’s moving forward, not too rigid in its ways,” Kashkoush explains. 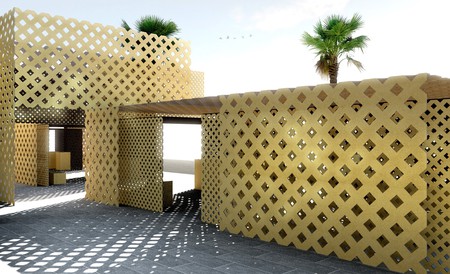 ‘Umbra’, by Finsa and Tinkah, is a modern take on the mashrabiya, the classic wood latticework | Courtesy of Dubai Design Week

Jokingly describing herself as an “Arab cocktail”, Kashkoush’s composite background, as a Palestinian-Kuwaiti with a Lebanese passport who grew up in Jordan, makes her the perfect spokesperson for a design week that aims to display the excellence of a large but often overlooked region. “I think Dubai is one of the most international design weeks. When you go to Salone or New York, Paris or Design Indaba, you’re not seeing Arabs – it negates 400 million people and 22 countries, every time. It’s just a bit heartbreaking. I appreciate that there’s a lack of access to this part of the world because of geopolitics, but that shouldn’t have to affect the young and emerging talent,” she says.

Since DXBDW was launched, interest in design in the UAE has increased among young people, and there are more opportunities to study design – including at the Dubai Institute of Design and Innovation (DIDI), which offers the first integrated Bachelor of Design in the region. “I think us having been established two years before the DIDI was what started the DIDI,” says Kashkoush. “What’s interesting is that you’ve got a lot of young people who live in the region and perform and behave differently, so they’ll often design objects that work within the cultural sphere of the UAE. It’s as simple as a butler stand that you hang your jacket on. Usually, it’s for a suit, but now we have finally made one for the kandura, the Emirati national dress.” 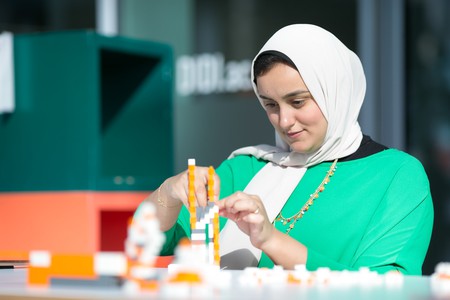 There’s also a widespread interest in isolating different elements of material from Arabic culture, “whether it’s coffee grains, sand from the desert, or how light penetrates transparent surfaces so that it’s representative of water and glass. Coral is often used, although that’s discouraged because it’s a harmful material for the environment to extract,” Kashkoush says. And Dubai’s unique urban planning, as a desert city that gets nearly all its water for drinking and domestic use from desalination, has even created a new design material, with salt that’s left over from the process turned into building bricks by Ibda Design.

As climate change becomes an ever-more urgent problem, design from the region could also begin to play a much larger global role. “It’s a great place to figure out how to design for a hot climate,” Kashkoush points out. “What materials endure direct sunshine for nine months of the year in 50C (122F) weather? It’s a great testbed for that. Shade, sunlight, air – how do you do low-tech, quick solutions for heat to combat the climate crisis?” It’s a question that will only become more important, and one that Dubai’s growing design scene may very well help to answer.