Dubai: A Poster City for Landmarks and Megaprojects 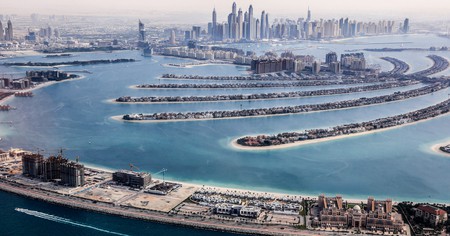 Dubai’s futuristic, glitzy landscape is home to innovative structures and the tallest buildings in the world. Here is everything you need to know about the top landmarks and megaprojects in Dubai.

Standing approximately 830 metres (2,722 feet) tall, the Burj Khalifa is the tallest structure in the world. It can be seen from 97 kilometres (60 miles) away. It is so tall that there is a six-degree temperature drop from the base of the building to the top. Once known as being a city in the sky, the Burj Khalifa was originally intended to be mainly used as a residential tower. The building is home to 900 residential apartments, with 163 floors and 57 elevators.

The Burj Khalifa was built by the real estate development group Emaar in the hopes of creating an icon that would encourage Dubai’s tourism economy. Built by chief architect Adrian Smith and chief engineer Bill Baker from the Skidmore, Owings & Merrill firm, the Burj Khalifa was designing with the tubular system in mind, invented by Fazlur Rahman Khan, which allowed the building to be made with less steel than was otherwise possible.

Originally named Burj Dubai during construction, the name changed after the 2008 crash put Dubai into debt and the Abu Dhabi government swooped in to help. The Burj Khalifa was named in honour of the Sheikh of Abu Dhabi and the President of the United Arab Emirates, His Highness Khalifa bin Zayed bin Sultan Al Nahyan.

Located in the upscale area of Downtown Dubai, the Burj Khalifa stands next to the Dubai Mall, the largest mall in the world, and the Dubai Fountain, the world’s largest choreographed fountain. 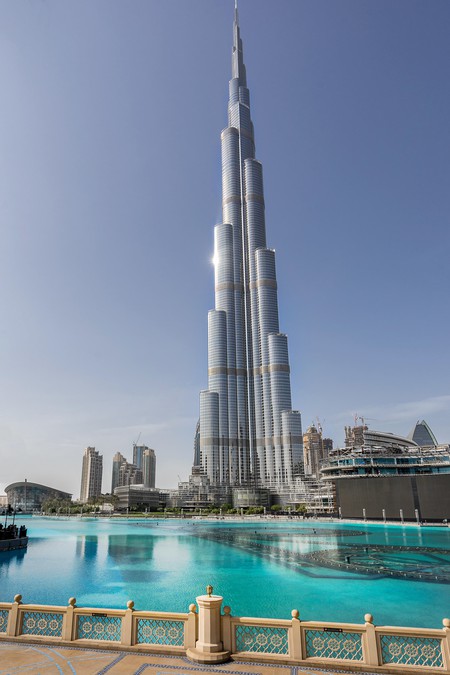 Dubai was on the way to becoming a household name after the completion of the Burj Al Arab in 1999. Designed by the consultancy firm Atkins and led by architect Tom Wright, this unique icon is shaped like a sail and sits on its own artificial island. Even though five stars is the highest official rating a hotel can achieve, the Burj Al Arab is internationally recognised as the first seven-star hotel in the world.

Although the seven-star myth was initially invented by a journalist, the saying stuck because of the high-class service it offers. In Britain, the main awarding organisation of stars is the AA, which awards five stars to a hotel that has: a range of alcoholic drinks available; a bathroom in every room; breakfast with fresh produce and homestyle cooking; an excellent quality bed, furnishings and decor; a range of facilities and public areas; a lobby with a welcoming concierge; valet service; and a basic range of utensils and cookware. The Burj Al Arab ticks all of these boxes and also includes: 24-karat gold-leaf interiors; a helipad and 24-karat-gold iPads for guests’ use; butlers on every floor; signature cocktails and gourmet food; and multi-level suites with dining rooms, living rooms and multiple bathrooms. The Burj Al Arab is also home to the highest atrium in the world, a dancing fountain and a built-in fire display. 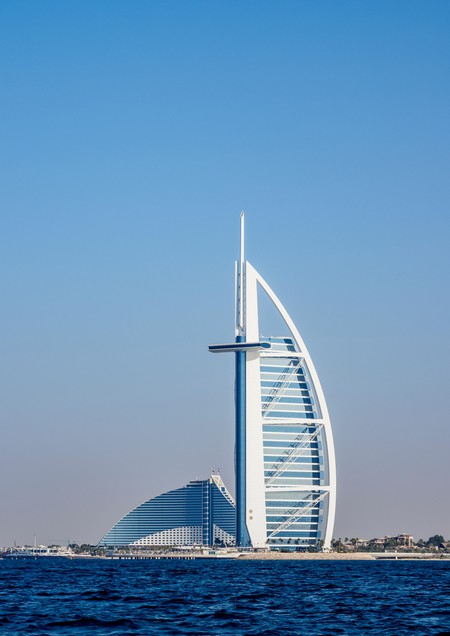 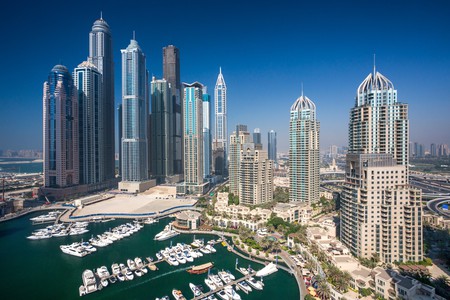 The Cayan Tower (formerly known as the Infinity Tower) curves around itself like a spiral. Standing at 306 metres (1,004 feet) tall and with 75 storeys, the Cayan Tower is the tallest tower in the world with a 90-degree twist. This tower was built by Cayan Real Estate Investment and Development and was designed by the same group that imagined the Burj Khalifa – Skidmore, Owings & Merrill SOM architectural group.

The Dubai Marina is also home to many of the other tallest residential towers in the world, including the Princess Tower, 23 Marina, Elite Residence, the Marina Torch, Ocean Heights and Cayan Tower. 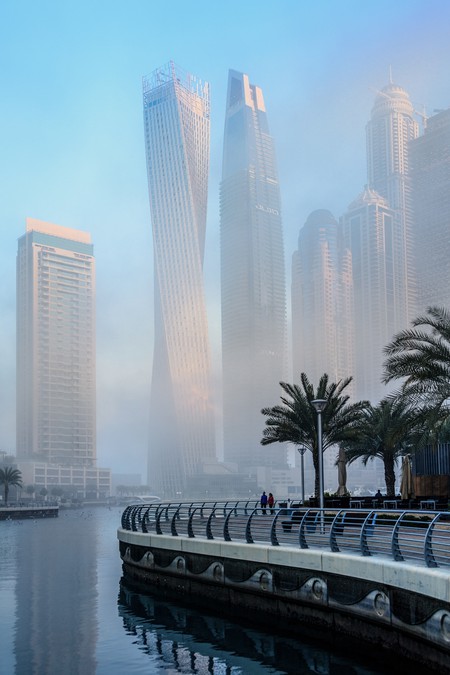 The Princess Tower was the largest residential tower in the world for two years, before it was surpassed by 432 Park Avenue in New York City in 2014. It became famous again when it hosted Dream Jump as part of the Dream Walker Around the World in 80 Jumps expedition in 2015. Dream Jumps are a way of experiencing free fall without the recoil of bungee jumping. This stunt included the world’s largest urban zip line, as well as 558 BASE jumps in just a few days. Check out the video below to see some of the action that took place at the Princess Tower for this event.

Dubai has grown from having a population of 183,187 in the 1970s to 2.71 million in 2017, and it continues to grow, both in population and in size. The expansion of urban Dubai stretches in all directions – and that includes into the waters of The Gulf.

Dubai’s coast is now also home to an artificial island in the shape of a palm tree. The Palm Jumeirah is the largest artificial island in the world and stretches the Dubai coastline by 520 kilometres (320 miles). Construction began in 2001 and the first residents came to the island in 2006. Besides having thousands of homes and apartments, the Palm Jumeirah is also home to luxury resorts like Atlantis The Palm and Jumeirah Zabeel Saray. Real estate developer Nakheel plans to have 32 hotels and 15,000 hotel rooms and hotel apartments on the island by 2020.

Also included in Nakheel’s plans are two more Palm Islands, Jebel Ali Palm and the Deira Island; the Dubai Waterfront, a crescent-shaped island; the Universe, designed to look like the Milky Way and the solar system; and the World Islands, an artificial archipelago of 300 islands that together look like the global map. Many of these World Islands are still under construction or have not been developed yet. 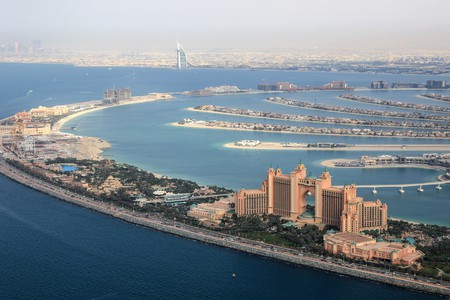 The Dubai Creek is located in the heart of Old Dubai and separates the two areas that were once the main hubs of the city – Deira and Bur Dubai. First settled by the Bani Yas tribe in the 19th century, establishing the Al Maktoum dynasty that is present today, The Creek was the only port in Dubai. It was a trading outpost and acted as the main source of Dubai’s income via pearls and fishing. During the 20th century, The Creek was dredged several times to allow larger vessels in. Nowadays The Creek still acts as a port, but it is also a tourist attraction. Heading into the new millennium, The Creek is now a part of the extraordinary megastructures club in Dubai.

The Dubai Water Canal links The Creek and the artificial Business Bay Promenade back around to The Gulf. This megaproject was a joint venture between the Roads and Transport Authority (RTA), Meydan and Meraas. Besides the waterway construction, bridges, walkways and a mechanical waterfall have also been built. The complete circuit stretches for 27 kilometres (17 miles) and currently has nine public transportation stations that will soon service 42 marine stops in Dubai. Full circulation of water from the head of The Creek (Shindagha) to Jumeirah takes 180 days. 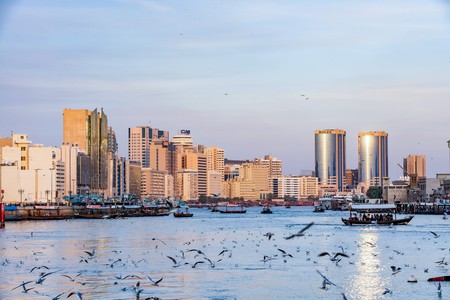 Check out the video below to see the architectural wonders of Dubai in their surrounding landscapes.