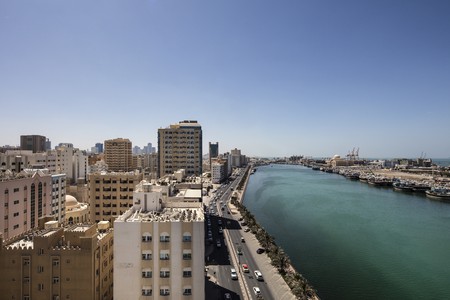 A new architecture triennial in Sharjah lets visitors explore a decommissioned market and former school, as well as visionary projects – from a desert garden to Bangladeshi mobile homes – that may help combat climate change.

It’s early evening in Sharjah, UAE, and the sunset colours the sky a pale pink as the Maghrib prayer is called from a mosque near the city’s Al Jubail district. Inside a nearby disused vegetable market the colours are almost as arresting, even though they’re artificial. A neon art and architecture installation has dyed the former vegetable stores in the market a striking, unnaturally beautiful green hue. The old Al Jubail Fruit and Vegetable Market is one of a number of venues that have been reappropriated as a part of the Sharjah Architecture Triennial, the first major platform for architecture and urbanism in the Middle East, North and East Africa and South and Southeast Asia. 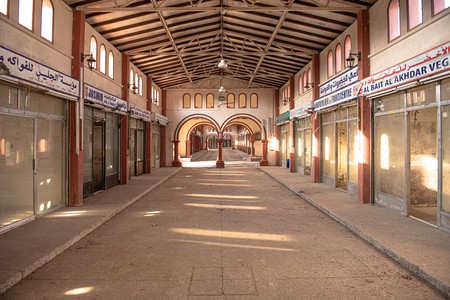 The event’s inaugural edition, Rights of Future Generations, looks at how buildings and urban spaces can respond to contemporary conditions, a subject that gets more and more important as climate change increasingly impacts the region. It’s also an opportunity for up-and-coming local architects to show their work on a global platform. Curator Adrian Lahoud, Dean of the School of Architecture at the Royal College of Art in London, says, “As an institution with a focus on decolonising architecture and offering a platform for a new generation of architects from across the Global South, the Sharjah Architecture Triennial offers an incredibly stimulating opportunity to explore architecture as an active part of the discourse around climate change and decolonisation.”

He sees the triennial as a much-needed resource for the region, and hopes it will support an emerging generation of architects drawn from across the Middle East, North and East Africa and South and Southeast Asia. “In understanding the significance of this new platform, we must acknowledge that the people and places most urgently threatened by climate change are often those who face regimes of socio-economic extraction and exploitation as a result of the continuing effects of colonialism,” Lahoud says. 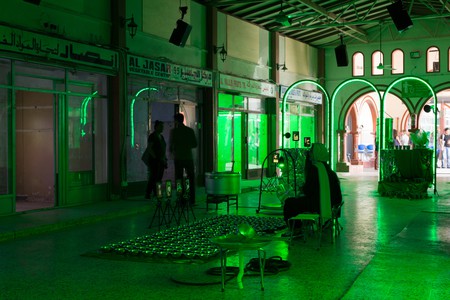 A number of old buildings in the city have been repurposed and given new life for the triennial, offering visitors an exciting opportunity to see another side of Sharjah architecture. Rather than choosing one of the city’s shiny new buildings, or the traditional Emirati houses seen in the Heart of Sharjah, the two main exhibition spaces are the city’s Al-Qasimiyah School and the old Al Jubail Fruit and Vegetable Market, which was built in the early 1980s but has been unused since it was decommissioned in 2015. “Both buildings are thoughtfully repurposed, decommissioned public buildings that offer leading examples of 1970s and ’80s architecture seen across the Emirate. They were chosen because they respond directly to the wider aims of the Triennial,” Lahoud says. The choice to adapt existing structures is an example of both the UAE city’s commitment to adaptive reuse, and the Triennial’s effort to remain rooted in the locality of Sharjah.

Al-Qasimiyah School is the Triennial’s main location, and is set to remain so for future editions. It’s a joy to visit; the large, sand-coloured edifice with beautiful lattice panels represents a time in the 1970s, after the UAE’s formation, when education was prioritised and an elementary school prototype was designed. It’s the first time one of the schools has been reused, and the building’s past is still written on the walls – a mural of children in a yellow school bus decorates the interior. “It is also significant that both buildings are public, because at the core of the Triennial’s long-term goal is a desire to make conversations around the future of architecture accessible to all,” Lahoud says. 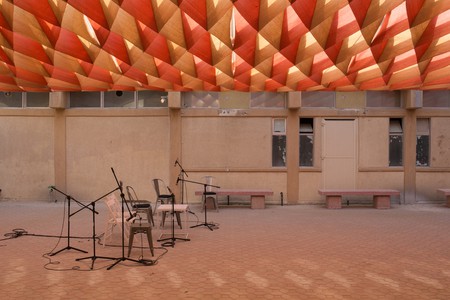 The many classrooms give the exhibition a labyrinthine aspect, as you wander the corridors and look into the rooms to discover the projects. Here, a look at the intrinsic character of domestic spaces in Tehran (Revolution Begins at Home by architects Hamed Khosravi and Roozbeh Elias-Azar, with artist Nazgol Ansarinia); there, a project that investigates how the UAE can create passive cooling by using fabric roofs outdoors, instead of the ever-prevalent air-conditioning (Set the Controls for the Heart of the Sun, all(zone)). On the ground floor, inside an enclosed courtyard, an exhibition by Marina Tabassum looks at the unsettled Ganges Delta landscape. The information is showcased inside mobile Bangladeshi homes that can be taken apart when there’s a risk of flooding, to be put back together when the water, and the danger, recede. It’s a beautiful, disturbingly practical reminder of how many people today live at the mercy of nature – and of global warming. 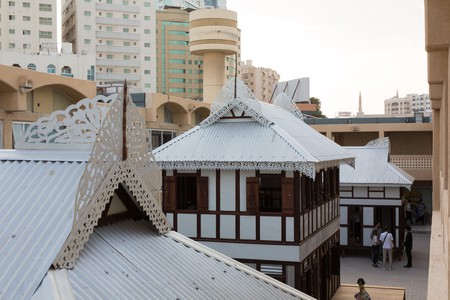 An exhibition outside the school also stays with you. In the bone dry, sandy ground, spatial practitioners Cooking Sections have created a desert garden, green tendrils winding their way out of the sand. “Challenging existing Western perceptions of the desert as bare and infertile, the duo carried out in-depth research into indigenous Bedouin knowledge of local plants, in order to prototype a new model of non-irrigated urban gardens for Sharjah and other cities in arid environments,” Lahoud explains. The project is emblematic of what the Triennial is trying to achieve. Visiting isn’t just a chance to see fascinating architecture from Sharjah’s past; it’s also an opportunity to discover what kind of spaces and ideas might come out of the rapidly changing region in the future.