Are Flying Taxis Really Coming to These Cities?

If you asked a child 20 years ago what the world would be like now, they’d probably have mentioned flying cars. Ask a child today about the future and they’ll talk about the same concept. But at what point will the flying car progress from a vision of a world to be to a regular sight in the skies above our cities?

Several companies are attempting to make flying taxis a reality, and a couple have already been tested in the UAE and elsewhere. Investors have also flocked to pump money into the nascent industry. Bu hurdles remain, including regulations, technical challenges, and persuading the public to get on board—literally.

This year several potential manufacturers of flying taxis have announced plans in the UAE, and Dubai in particular. And Dubai is certainly serious about beating other cities to launching a flying taxi service. In September, a maiden test flight of a two-seater, 18-rotor unmanned flying car took place.

The car—made by German company Volocopter—lifts off and lands vertically, and on its test flight took Dubai’s Crown Prince Sheikh Hamdan bin Mohammed on a five minute flight 200 meters above the desert. Volocopter is backed by the giant carmaker Daimler.

Another major company taking serious steps towards producing their own flying taxi is Airbus. This month the French aeronautics company announced the flying car it has been working on will be ready for test flights by the end of next year.

The first tests will be unmanned, but Airbus intends to have aircrafts flying above cities by roughly 2023, and these initial four-person vehicles will have pilots. Airbus’ ultimate goal, which they announced in 2016, is to have an autonomous flying taxi. 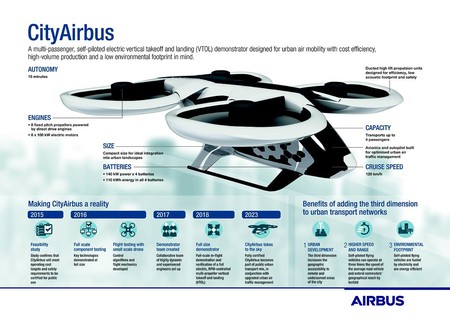 The proposed timeline for CityAirbus | © Airbus

Uber has also explored the possibilities of taking to the skies. The ride sharing company announced plans in April to bring a fleet of flying cars to Dallas, Texas, and Dubai by 2020. The company has partnered with the likes of Hillwood Properties in Texas and Dubai Holding in the UAE to identify locations where it can build ports for these vehicles to take off and land from, and has teamed up with an electrical charging company Chargepoint to figure out how to keep the vehicles powered.

Uber doesn’t plan to design and build a flying car, but has partnered with a number of companies who have that goal. The ride-hailing service has signed deals with five different contenders developing electric vertical takeoff and landing aircraft. These include aviation companies Aurora Flight Sciences, Pipistrel, Embraer, Bell Helicopters and Mooney.

In a report published in 2016, Uber revealed the extent of its flying vehicle ambitions, estimating it would need 1,000 aircraft and 83 ‘vertiports’, using 12 charging spots each, to serve three or four cities.

In February 2017 Chinese company EHANG tested its autonomous aerial vehicle, again in Dubai. The vehicle is basically a drone big enough for passengers to sit in. The passenger can select where they want to go from preset routes, and sit back and let the vehicle do the work. The company and Dubai’s transport authority did suggest at the time that it could be in use by July, but there’s no sign of massive drones buzzing around the city’s skyscrapers yet.

These projects have all captured headlines, but a more reliable measure of how seriously they should be taken can be gauged from the amount of money thrown at them. And investors have certainly not shied away from the sci-fi movie-nature of these ambitions.

Volocopter, the company that conducted the most recent tests in Dubai, has raised $29.46 million in investment, while another major player, Lilium, has secured over $100 million from investors. Lilium is a German-based company developing a five-seater jet that will be flown commercially. The jet can take off vertically and reach speeds of up to 300 km/hr. The vehicle was tested outside of Munich this year.

Money aside, there are still a number of challenges facing the developing air taxi industry. For one thing, none of these vehicles have transported people on any kind of regular basis, and there is still work to be done on perfecting designs and making them run efficiently as possible. There are also gigantic regulatory hurdles to overcome. Countries like the U.S. keep a pretty close eye on what is flying in their airspace, and a fleet of flying taxis would add another wave of complexity to already crowded airspace.

Perhaps this is why Dubai remains the front runner in this field. The Emirate’s Road and Transport Authority has apparently made this type of airborne local travel a priority, and the UAE’s government, for all its flaws, is able to cut through a lot of the bureaucracy found in other countries.

But other regulations may push flying vehicles higher up the agenda of governments. All of the vehicles are electric, meaning they represent a cleaner form of transport than cars, and also promise to take some of the traffic off the roads and ease congestion.

There are still more flying vehicles being developed not mentioned in this article, and as countries like the UAE make concerted efforts to make them a reality it seems inevitable that we’ll be able to book flying taxis in some countries in the future. After that, we’ll just have to see if the concept really takes off with those who matter: the passengers.