The 10 Best Restaurants To Try In Dubai 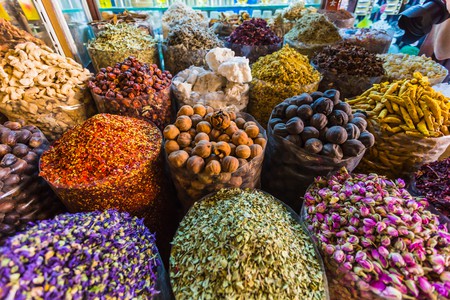 Dubai is the jewel in the Emirati crown, an ultra-modern metropolis in which abundance and luxury are everywhere on display. The city’s reputation for excess and extravagance is perhaps most evident in its restaurant scene, where every dish must meet the pinnacle of fine dining perfection, and where culinary giants from all over the world come to prove their credentials. Here are 10 of the best to try.

An indulgent taste of Japanese luxury in the heart of Dubai, Zuma has been hailed as one the best restaurants in the world by San Pellegrino. It specializes in the Japanese Izakaya style of dining, in which food is served to share. But Zuma raises it to the level of lavish fine dining. The Tokyo based design house Super Potato is responsible for the stylish and minimal dining space, which evokes the best of contemporary Japanese interior design. The food is the main draw however, and the taste explosion offered by seemingly simple takes on Japanese cuisine is unmissable. Highlights include the miso marinated black cod and the steak with truffles, whilst the restaurant also offers a full selection of sashimi, sushi and grills from the Robata counter, all of which are delivered to perfection. 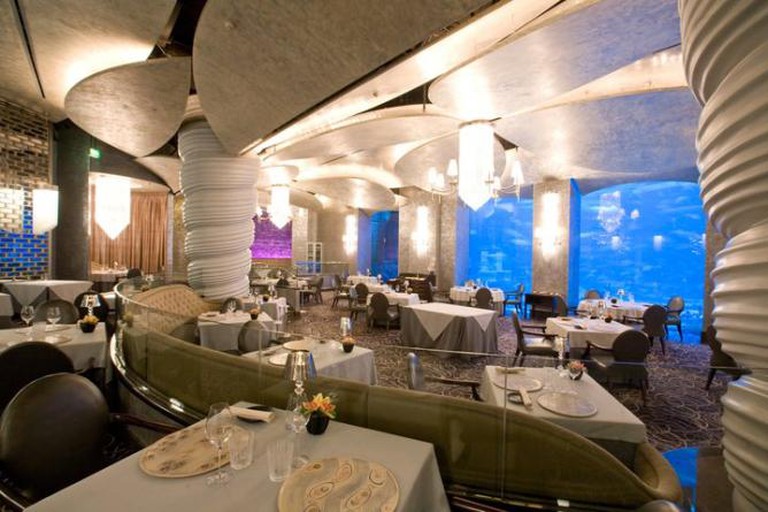 Ossiano Interior | Courtesy Ossiano
Dubai’s La Petite Maison has been acclaimed as one of the 100 best restaurants in the world by San Pellegrino and is fast becoming an essential stop on any culinary tour of Dubai. Its focus on the French haute cuisine traditions of the Mediterranean coast is unparalleled in Dubai, and it is to the restaurant’s credit that it retains something of the rustic traditions from which this cuisine originated. The menu is an ever changing delight, and some recommended dishes are loup de mer en croûte de sel, salt baked fillet of line-caught sea bass with artichokes and tomatoes, and côte de veau grillée or grilled veal chop.

Entering Ossiano is certainly unlike any other restaurant experience in Dubai or around the world. The underground restaurant is surrounded by the aquarium of the Ambassador Lagoon giving the impression of dining at the bottom of the sea. The restaurant’s focus of course is firmly on seafood. The Lagoon contains 65,000 marine mammals, which swim around diners as they enjoy their food. Ossiano offers both an a la carte menu and a prix fixe tasting menu. The procession of incredible seafood dishes which make up the latter have been described as works of art, as visually stunning as they are delectable.

French culinary master Pierre Gagnaire has developed an international reputation for innovation and excellence, which is more than upheld at his Dubai venture, Reflets par Pierre Gagnaire. This is another of Gagnaire’s culinary laboratories, where the ingredients and techniques of French cuisine are stretched to the limit, to create new dishes which both surprise and delight. Dishes are imbued with a sense of drama, which is matched by the opulent décor of the dining space. Head Chef Olivier Biles’ menu is ever changing, but diners have recommended the parmesan soufflé with spinach velouté and torrefied pine nuts as well as the quercy lamb roasted with oregano and glazed with tamarind juice.

Dubai has become the honeymoon destination of choice for many couples in recent years, and with restaurants like Pierchic it is quite evident why. Located on stilts far out into the Persian Gulf, Pierchic is an oasis of calm in the middle of the ocean, which nevertheless offers an incredible view the bright lights of the city. The menu is firmly focused on seafood, and dishes such as yellow fin tuna tartar and sautéed tiger prawn carnaroli saffron risotto more than complement the incredible fairytale setting.

Al Iwan, Burj Al Arab | © Al Iwan
Located in the stunning Burj Al Arab, Al Iwan attempts to return to the culinary roots of the Persian Gulf, and of the Emirates itself. The setting is as opulent and luxurious as you can image, combining gold, red and black in an inimitable display of lavishness. The grandeur of this setting is contrasted by the food, which is a hearty celebration of the best Arabic cooking, from hummus and baba ganouj, to a selection of mezze and lamb couscous tagine. The range of dishes is remarkable, and diners can enjoy the full panorama of Arabic cuisine in these extravagant surroundings.

Armani/Amal brings the best of Indian cuisine to Dubai’s Burj Khalifa. As part of the Armani hotel in the Burj Khalifa, Armani/Amal maintains the same standards of luxury and quality found throughout this modern masterpiece. The restaurant’s contemporary minimalist interior matches the hotel’s modern design scheme, and allows the fiery food to take center stage. With a focus on regional cuisine from India the menu is incredibly varied, with a selection from every corner of the country, all of which is given a distinctive modern twist.

Restaurant, Seafood, Middle Eastern, $$$
Facebook
Email
Twitter
Pinterest
Copy link
Share
Al Hadheerah is a cultural event in itself, unlike anything else in ultra-modern Dubai. Set within the Bab Al Shams Desert Resort and Spa this is a comprehensive celebration of Emirati culture, with displays of traditional dancing, camel caravans, horse performances, and falconry exhibitions, as well as musical performances from Arabic singers. The entire restaurant is built in what looks like an ancient Arabic fort, and an extensive buffet is served in traditional Emirati stalls. The food is similarly rooted in tradition, and includes such classic Arabic dishes as lamb cooked in a charcoal pit and an incredible variety of treats and delicacies. Whilst kitschy, Al Hadheerah is nevertheless one of the few places where traditional culture is celebrated in the city.

Restaurant, Chinese, $$$
Facebook
Email
Twitter
Pinterest
Copy link
Share
Bringing the best of Chinese cuisine to Dubai, Zheng He is a decidedly modern take on classical Chinese flavors. The restaurant blends East and West effortlessly, with an emphasis on Western presentation and Chinese techniques, which makes for some surprising and delicious combinations. The décor is simple but evocative, with subtle Chinese touches which avoid becoming too brash and tacky. The food is similarly refined, with dishes such as deep fried beef strips, sweet vinegar glaze and sichuan siew mai, crispy egg yolk evoking the wonders of Chinese cuisine in a luxurious and contemporary style.

TOMO was awarded the best newcomer award by Time Out Dubai for its Japanese cuisine, with an emphasis on authenticity and provenance which immediately marks it out from some of the more fine dining Japanese restaurants in the city. The comprehensive menu offers the classics of Japanese cuisine, as well as some surprising but delicious modern twists. Dishes such as shimesaba kikka, cured mackerel with vinegar and chrysanthemum flower, and agedashi tofu come highly recommended, whilst the terrace view is an attraction in itself and is ideal for pre-dinner cocktails.