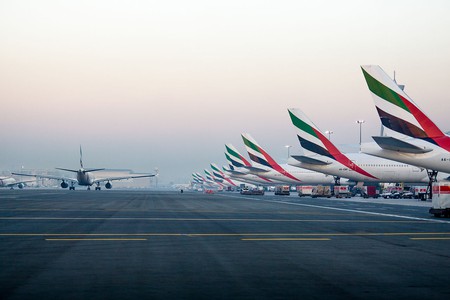 Dubai is famous for being a business hub and glitzy travel destination—a testament to the city’s success as well as the success of its aviation sector. This is everything you need to know about Dubai International Airport and it’s home grown success story, Emirates airlines.

Part 1—Center Of The World

The ruler of Dubai, Sheikh Mohammed bin Rashid Al Maktoum, called Dubai’s main airport the ‘Gate of Peace’ between the West and the East—a statement that rings true: it is centrally located in the world and acts as an intercontinental link, both commercially and aeronautically. This central location has helped Dubai’s Emirates airlines cross over into six continents. 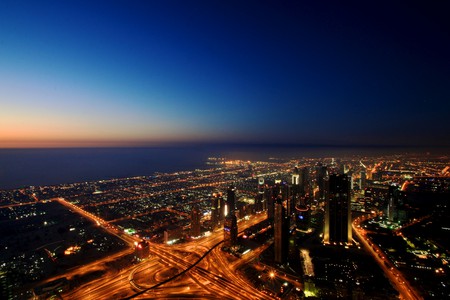 View of Dubai at night from the Burj Khalifa | ©elisasophia / Flickr https://www.flickr.com/photos/elisasophia/5567606084

Dubai International Airport is a global leader, with state-of-the-art facilities and world records. It is the largest airport in the Middle East and the largest in the world by international passenger traffic. In 2016, it received 83.6 million passengers. With the constant growth of Dubai and its airline, it is projected that the airport will hit 90 million, its maximum capacity, by 2020.

Its signature airline, Emirates, is an unheard-of airline success story. In 1985 the carrier opened with only two leased aircraft and to date, it has turned a profit every year except the second. For more than a decade, Emirates has consistently been on Skytrax’s World Airline Awards top 10 list for best airlines. It has also earned the number one spot several times, including this past year. As the fastest growing airline in the world, Emirates has become a key influencer in the aviation industry; it has broken several records with bulk orders of planes and has also acted as an innovator. Examples of this the following world in-flight ‘firsts’—shower, entertainment system for individual passengers and mobile phone service. 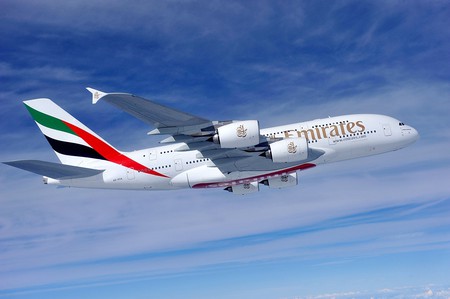 Emirates airline and Dubai International Airport have played such a key role in the development of the city, that the airport code DXB is used colloquially across the emirate as a short form for Dubai. Even companies and events use ‘DXB’ in their titles, including DXBeach, Eat The World DXB and Red Fest DXB. This may sound a little odd, but 90% of the population flew into Dubai to start new lives.

If you are planning on traveling to Dubai on Emirates, then get ready to be pleasantly surprised by the onboard entertainment. This airline has won Skytrax’s award for the World’s Best Inflight Entertainment 12 years in a row. The economy class is commonly said to be a luxury compared to many other airlines, and the premium classes are out of this world. Emirates also have a plush private jet, the Emirates Executive, which is available for chartering. Check out the video below to see one blogger’s tour of the famed Emirates A380’s first class suite.

Dubai International Airport has one of the largest duty free retailers in the world. Stock up on booze there if you’d like to take some into the city with you, as tourists aren’t able to buy alcohol the emirate. The duty free allowance includes 4l of alcohol, 400 cigarettes or 2kg of tobacco and 200ml of perfume. Also keep an eye out for the lottery. The Dubai Duty Free raffles may be pricey, but they also have great odds—you could go home with a couple million or a car. 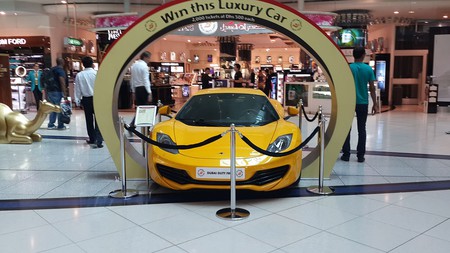 On your way out of Dubai make sure to pack a bag that is not oversized and comes with at least one flat surface, otherwise it will be rejected. Don’t worry if this does happen to you though, the airport offers repacking options, including boxes to put your bags into.

When navigating your way to departures, please note that Terminal 2 has a separate entrance and is where the low cost carrier Fly Dubai operates out of. Terminal 1 is for all international carriers; and terminal 3—the largest terminal in the world—is for Emirates and Qantas A380s only. If you are flying first or business class on Emirates, the entrance for the departures area is separate and comes before the economy check-in area.

Be sure to come early, not just because you’re supposed to, but because the airport has many opportunities for shopping and dining. If you’re traveling premium class on Emirates, then try the award-winning lounges. If you’re flying an international carrier then head to Dubai’s favourite pub – McGettigan’s (Terminal 1, near gates C21 and C23) for a relaxing beer and a snack before your flight. 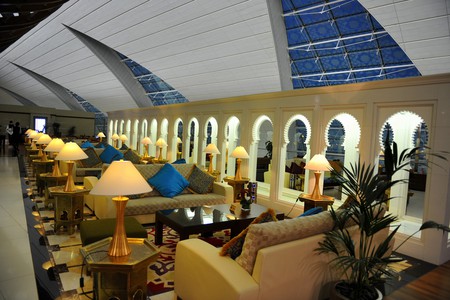 If you’re transiting through Dubai and have time to spare, DXB has services that you won’t want to miss. If you’re tired and want to catch a nap, rent out a Snooze Cube; they’re little rooms with a bed and television. Afterwards, take your kids to the dedicated play area, relax at the Zen garden, or go for a swim at the G-Force Club. If you’re going to be at the airport for longer than a few hours, consider staying at the five-star Dubai International Airport Hotel. While you’re there take advantage of the amenities; relax at the sauna, re-energise with a workout, or rejuvenate your senses at the spa.

This modern airport is so impressive that it has had multiple documentaries made about it. If you would like to see the action that takes place behind the scenes, tune in to watch National Geographic’s Ultimate Airport Dubai.