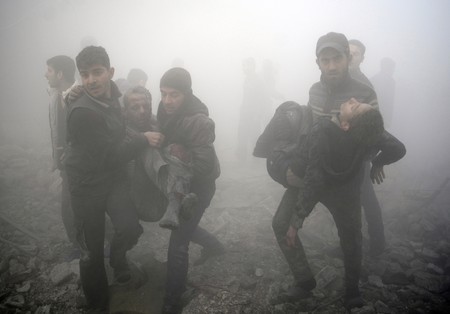 Google has teamed up with the United Nations Refugee Agency to launch a site aimed at educating people about the Syrian refugee crisis.

The site, “Searching for Syria,” takes U.N. data and stories and combines them with Google Search Trends to shed more light on the scale of the devastation, and the world’s efforts in helping those Syrian families forced to leave their homes.

The site answers five of the most common queries people around the world have about the Syrian refugee crisis. These include what Syria was like before the war, what is happening in Syria, who is a refugee, where are Syrian refugees going, and how people can help Syrian refugees.

“Searching for Syria aims to dispel myths and misconceptions about Syria and refugees and provide an entirely fresh look at the biggest humanitarian tragedy of today,” U.N. High Commissioner for Refugees Filippo Grandi said in a statement. “This is a fantastic project with Google that allows us to pinpoint and answer the five key questions about Syrian refugees and displaced that audiences most want to know and help us rally much needed support and funding for our humanitarian effort.”

The website also features 360-degree videos of ancient sites that have been damaged or destroyed during the war in Syria.

The crisis in Syria is now in its seventh year, and more than five million Syrian refugees are facing dangers and hardships. The efforts to help Syrian refugees face huge challenges, as only 17 percent of the funds needed to meet the needs of these families torn away from their homes by war are actually available.

The website features a link to donate to the U.N. Refugee Agency, and also to the organization’s #WithRefugees petition, which calls to guarantee education for refugee children and adequate housing for families.