The devastation caused by the Syrian civil war has been well documented. The conflict has killed hundreds of thousands of civilians, while displacing millions more, leading to the world’s largest refugee crisis since World War II. Yet in the midst of this trauma, Syria’s powerful art and culture continues to persevere. Refusing to let itself be defined by its tragedies, Syria’s art scene has adapted and endured in the face of chaos and destruction. 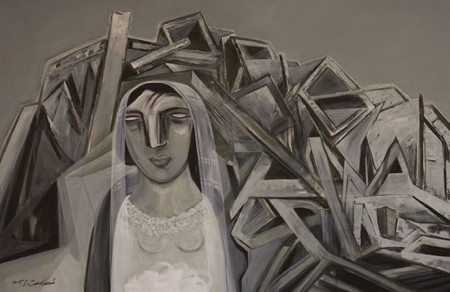 Before the country was ravaged by civil war, Syria was considered one of the leading centers of art in the Middle East, simultaneously known for its well-preserved cultural history and exciting, up-and-coming galleries. With the start of the Arab Spring, art became a way for people to create a revolutionary identity for themselves, using paintings, street art, and film as a medium to express their opposition to the regime, and their hopes for a new future. As is well known, these hopes were dashed, and the government instead reacted with extraordinary brutality to its citizens. This may have been expected to diminish creative expression; instead, as with many in the past facing oppression and violence, Syrians have continued to place value on the importance of artistic production, often using it as a platform to expose the realities of their life under war.

Of course, this is not easy, especially when it comes to the art scene within the country itself. The world-renowned International Photography Festival in Aleppo continued to be held until 2014, after which it became impossible. Many of the country’s famed galleries and studios have relocated to Lebanon and the Gulf States, fleeing from the escalating violence and continued censorship and artistic oppression. Nevertheless, incredibly, some have stayed on.

The Tajalliyat Gallery first opened in 2009, when the Syrian artistic community was at its zenith. Six years later, the gallery has miraculously survived the Arab Spring and the ongoing civil war, and continues to function as an artistic center. Despite dramatically dwindling visitor numbers, many Damascenes still attend the gallery’s exhibitions and events; not only does the gallery offer a rare opportunity to absorb art and creativity in the midst of violence but also allows visitors to briefly forget about the turmoil outside of the gallery’s walls, and return to a time when Syria was at the heart of artistic production. The gallery’s most recent exhibition was in May 2015, and showcased works by renowned Syrian contemporary artist Talal Moualla, known for his striking portraits that blur the line between the real and the magical. In a country where artworks and historical sites are constantly being looted and destroyed, galleries such as Tajalliyat are astounding examples of creative resilience. 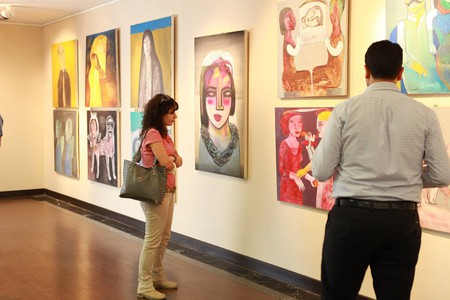 It is not only in galleries where art is being created. Particularly since the revolution and subsequent war, art has spilled out from its traditional spaces and onto the streets. Taking advantage of the dissolving boundaries between art and politics, many are using the cityscape as a platform for creative and civil expression, with graffiti – ranging from poetry and drawings to anti-regime slogans – covering the walls. Groups such as Alshaab alsori aref tarekh (The Syrian People Knows Its Way), made up of street artists, graphic designers, and cartoonists, create visually arresting posters that they upload online for anyone to print and take to the streets. Not only does their work challenge the oppression of the regime, often satirizing the iconography and rhetoric of governmental propaganda, but also makes subversive art accessible to all.

Meanwhile, in the little town of Kafranbel in northwestern Syria, everyday citizens are creating banners and cartoons that they then exhibit in the streets and upload onto social media, creating a sort of narrative of the revolution through the eyes of a small town. Due to the lack of resources and opportunities, innovation has become one of the key features of contemporary Syrian art. The chaos of the war and the need for freedom of expression has led to the emergence of these marginalized art forms, which emphasize Syrian creativity as by the people, and for the people.

Outside of Syria, the artistic platform changes, while the themes remain the same. The Syrian artistic diaspora has largely remained in the Middle East, focused in areas such as Lebanon and the Gulf States, where Syrian galleries have relocated. Yet the plight of their homeland still occupies these artists, even when they are out of it. Tamman Azzam has created enormous buzz for his gorgeous digital designs, which superimpose Western art onto ravaged scenes of war-torn Syria. His most iconic work, Freedom Graffiti, features Gustav Klimt’s The Kiss digitally painted onto a bombed building in Damascus, dramatically juxtaposing beauty with tragedy and destruction. Azzam now lives and works in Dubai, where his work is represented by the Ayyam Gallery. 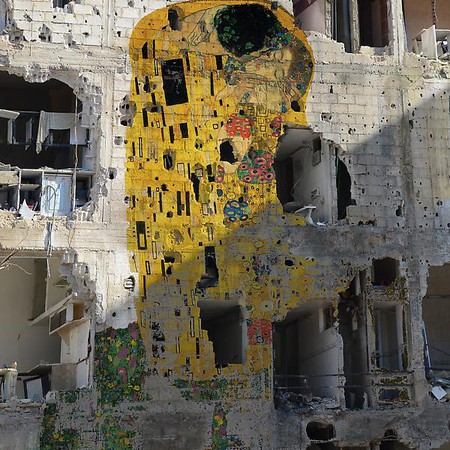 Yet it is not only established and represented artists who are contributing to the creative outpouring from the Syrian diaspora. The Syrian refugee crisis has been explored and covered in depth by various media outlets, but now those involved in the crisis are lending their voices to the ongoing discussion through their art. In Amman, mere miles from the now infamous Za’atari refugee camp, the Jordanian arts center Jadal Culture recently hosted an exhibition by Syrian refugees living in the camp, entitled Syria: Culture and Civilisation. Supported by humanitarian organizations such as UNHCR, the exhibition gave a platform for the refugees to tell their own stories, and to depict their memories of their homeland, and their experiences of displacement, through painting, drawing and mixed media. 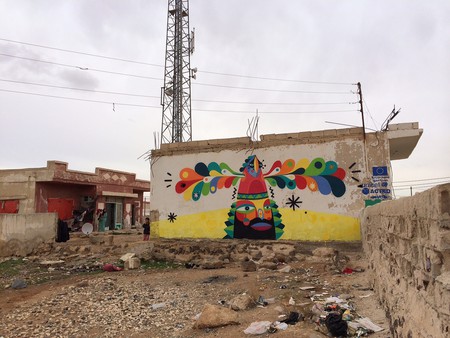 The exhibition provided a small glimpse of the creativity emerging in camps such as Za’atari; only mere months before, an initiative led by various development organizations encouraged children from the camp to paint enormous, colorful murals on the outer walls of the facility, incorporating traditional Arabesque patterns, bold portraits, and messages of hope and peace. Enterprises such as this rewrite the typical refugee narrative of helplessness and numbness, and allow the refugees agency to express their own stories. As with all the art both within Syria and in the Syrian diaspora, these murals exhibit a defiance of spirit that fights back against the tragedies of war and displacement, highlighting the endurance of art and creativity.