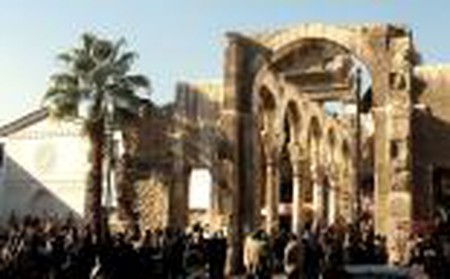 The ongoing Syrian conflict has wreaked havoc on the lives of the Syrian public as well as on the historical topography of one of the world’s oldest civilizations. Films made in the country have recorded revolutionary forces taking cover in medieval castles and government tanks maneuvering among ancient Roman colonnades. What follows is a list of historical Syrian sites that have been significantly damaged by the civil war. 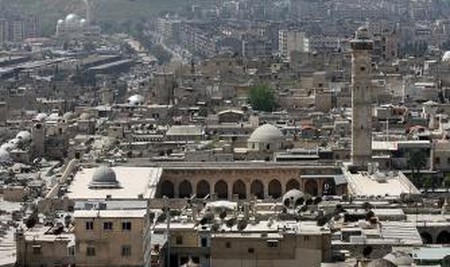 The Ancient City of Aleppo became a UNESCO World Heritage Site in 1986 because of its largely unchanged buildings which date from the 11th through the 16th centuries. The Great Mosque of Aleppo, or the Umayyad Mosque, is one of the most historically significant mosques in the medieval walled city and rests on the ground that once housed the agora in the Hellenistic period. Although the mosque was originally built during the 8th century, the structure was renovated during the 11th century, when a covered fountain was added to the central courtyard, and a 45 meter minaret installed, to become the holy structure’s most striking architectural element. In September of 2012, the Syrian war began to take its toll on the city of Aleppo when a major attacked was launched by the Free Syrian Army. Then in April of 2013, the mosque was bombarded by massive shelling and the impressive minaret left as rubble. 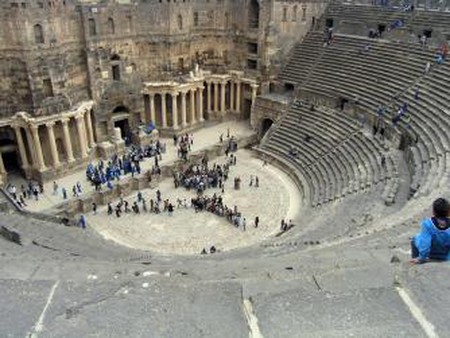 The southern Syrian town of Bosra was declared a UNESCO World Heritage Site in 1980. Bosra’s rich archaeological ground is a treasure trove of ruins from the Roman, Byzantine and early Islamic eras. During the Roman period Bosra existed as an affluent capital at the crossroads of several trading routes. Along with colonnades, triumphal arches and baths, the town is also home to an impressive Roman amphitheater likely constructed during the rule of Trajan. The town’s Alm-Omari Mosque, of 721 AD, is one of the oldest remaining mosques in the history of Islam and boasts an early example of the Umayyad square minaret. This architectural feature would later be reconstructed in places like Damascus and Aleppo. 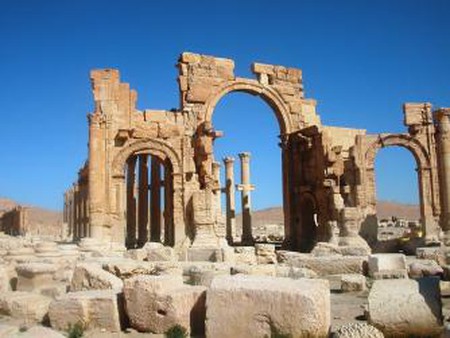 The oasis city of Palmyra, a UNESCO World Heritage Site since 1980, was once a metropolitan trading centre that connected Mesopotamia and Northern Syria and acted as an important travel stop for those crossing the expansive desert. Early documentation of the city, such as those found on Babylonian tablets from Mari, refer to Palmyra by its Semetic name, Tadmor, Tadmur, or Tudmur, by which it continues to be referred. The most monumental and breathtaking building in the city is the massive temple of Ba’al, which is considered the foremost piece of religious architecture of the 1st century AD in the Middle East. Ba’al was originally built as a Hellenistic temple, with its grand Corinthian colonnade and triumphal arch dating to the rule of Septimius Severus. Residents of Palmyra state that a Syrian army set up camp in the citadel overlooking the modern city and the ancient Roman ruins. Machine gun fire is said to have poured over the ruins, causing much damage to these already precarious historical treasures. 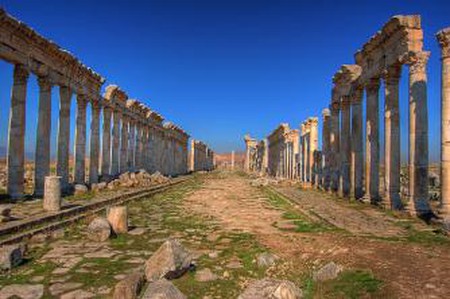 The tentative World Heritage Site of Apamea was established in 300 BC by Seleucus Nicator, one of Alexander the Great’s generals, who named the city after his wife Apame. Apamea was later made part of the Roman Empire by Pompey in 64 BC. It was during this period that much of what remains of its architecture was developed, although notable Byzantine remains can also still be viewed today. A walk down the impressive ancient street, known to the Romans as Cardo Maximus, easily ignites one’s imagination with visions of the grandeur that once was. The 1.85 kilometer long, 87 meter wide road is lined with a spectacular series of classic columns as well as the ruins of civic and religious buildings. 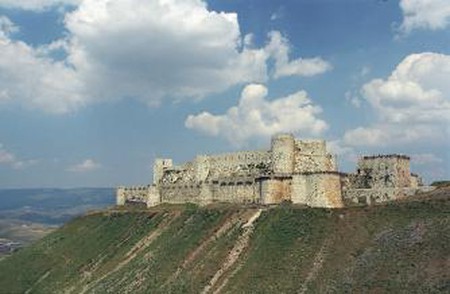 The Krak des Chevaliers was built by the Hospitaller Order of John of Jerusalem during the second half of the 12th century and remains one of the best maintained examples of a Crusader castle. The castle sits atop a steep hill along the border of the County of Tripoli. Its central courtyard is enclosed within two rings of walls and towers – the innermost ring taller than the external ring – to defend against attack. The interior spaces include a Gothic style balcony, a dining hall, a 12th century Romanesque chapel, kitchens, and storage space for a five-year supply of food. In 1271, after a 200-year residence in the land, the Crusaders surrendered the castle to the Muslim army following an attack by a large brigade. UNESCO named the castle a World Heritage Site in 2006. Damage has since been done to the castle by Syrian forces during the conflict, and has likely been used by rebels to have a good vantage point over the surrounding area. 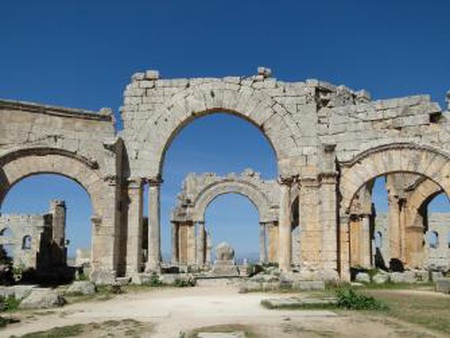 The Church of Saint Simeon Stylites is located in northwest Aleppo and is the oldest remaining Byzantine church. Famous as the site of the pillar of St. Simeon Stylites, it was named for St. Simeon (386 – 459 AD), a hermit monk who perched himself atop the 15 meter-tall pillar for 37 years, preaching to surrounding crowds two times daily. A few decades after his death, a martyrium was built in his honour. The structure was made up of four basilicas in a cruciform plan with the pillar at their centre; it is said to have been so large that it almost equaled the size of Hagia Sophia in Constantinople. Although it stands at a mere two meters, the pillar can still be seen today, surrounded by the ruins of the Basilicas. The Church of Saint Simeon Stylites was designated as a UNESCO World Heritage Site in 2011. 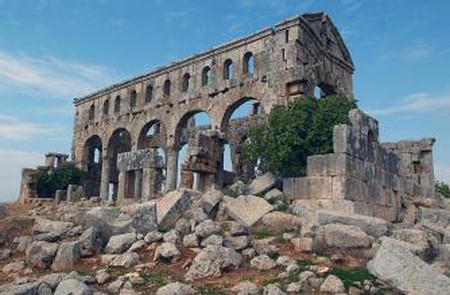 The Dead Cities of northern Syria are a collection of 780 deserted towns in an elevated limestone area by the name of Limestone Massif. Constructed between the 5th and 8th centuries, the towns span a distance of 20 to 40 kilometers. Visitors can wander through expansive villas, town baths and churches, and explore the remaining Hellenistic architecture. Wealth arrived in these settlements during Byzantium, when olive oil and wine manufacturers made local families rich. Massive stone presses for oil and wine rest beneath grand porticoes as eerie reminders of the lost affluence of these ghost towns. Although archaeologists have conducted extensive digs in the area in an attempt to discover the motive for the towns’ abandonment, little is known about why these populations so suddenly left home. These ancient cities were made a UNESCO World Heritage Sites in 2011. 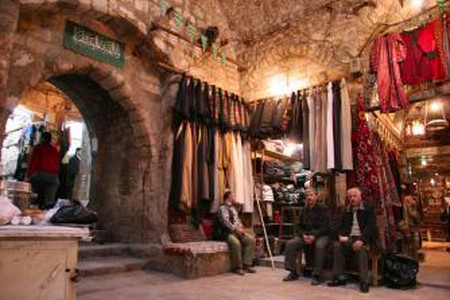 Al-Madina Souq in the City of Aleppo

Located within the World Heritage Site of Aleppo and spanning 13 kilometres, Al-Madina Souq is the world’s largest covered market with a historical significance. Aleppo’s strategic trading location made the market a popular spot for those wanting to take advantage of commercial roads connecting east and west. Al-Madina likely dates back to the 14th century, and provides shoppers with luxury goods like Iranian silk, Indian spices and dyes as well as local products like wool and soap. Aleppines pride themselves on being the inventors of the supermarket concept, which derived from these such souqs. In September of 2012, Al-Madina was devastated by fires as a result of crossfire between Bashar Al Assad’s forces and the rebel groups. 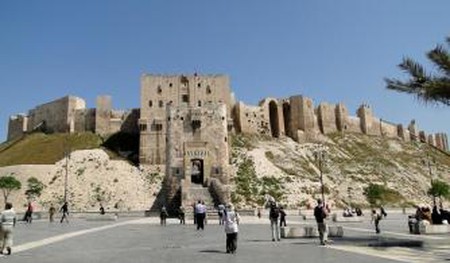 The Citadel of Aleppo

The Citadel of Aleppo stands atop a limestone hill, dominating the skyline of this World Heritage city. The primarily medieval structure was built largely during the 12th and 13th centuries by the Ayyubids – a Muslim dynasty of Kurdish origin, but a significant portion of the structure remains from the Ottoman era – built during the beginning of the 16th century. A recent excavation of the citadel has revealed the remains of a Bronze Age temple dating to the 3rd and 2nd millennia BC. This neo-Hittite temple contains a detailed series of reliefs depicting pagan deities that help to shed light on this early period of Syrian history. Both the Syrian National Council – the main radical group in the country – and the Syrian government have been accused of causing damage to this important monument. 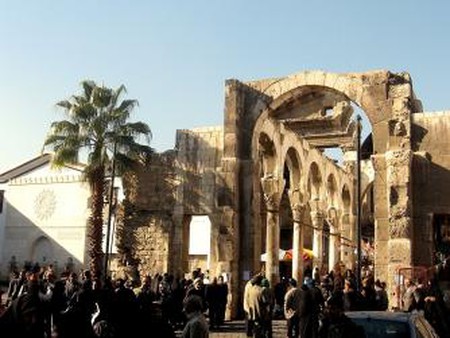 Originally settled in the 3rd century AD, Damascus is one of the oldest continually occupied cities on earth and houses around 125 historical monuments all dating to different periods. Excavations around the periphery of the city suggest that the area of Damascus was settled as early as 10,000 BC. Although the dominant remaining architecture is of the Islamic period, evidence of the Roman and Byzantine eras also remain prominent; the modern city retains the Greek city plan, with streets running east to west and north to south. As a result of the Syrian conflict, a Jobar Synagogue within the city was looted and obliterated by flames. The Syrian government and the rebel forces argue about who is responsible for the ultimate demolition of the Synagogue, the country’s holiest Jewish site. The city of Damascus has been a UNESCO World Heritage Site since 1979.