The Syrian Pavilion At The 55th Venice Biennale 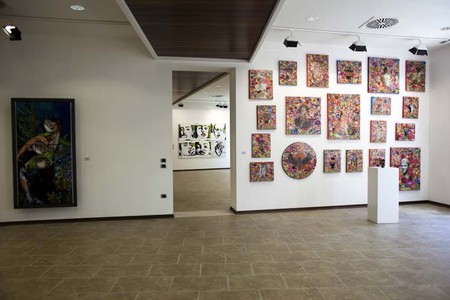 In a time of crisis, Syria’s Biennale Pavilion reaches out to artists from the Mediterranean and beyond, establishing political, cultural and artistic connections in the face of conflict. Under the title Cara Amica Arte (‘Art, Dear Friend’), seventeen artists unite in a heterogeneous prism of pop and metaphysics. 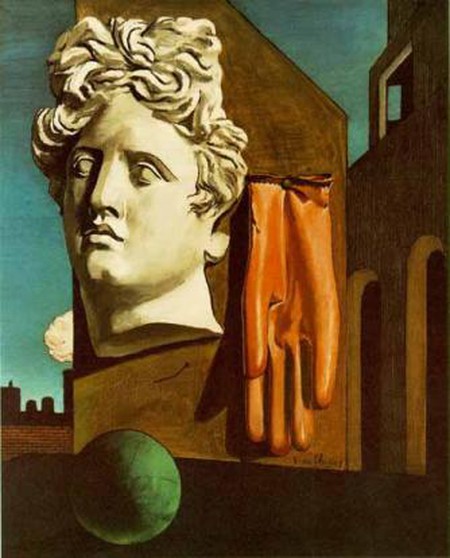 A profound influence on the Surrealist movement of the 1920s, the Greek-born Italian painter and sculptor Giorgio de Chirico (1888-1978) was moved by what he perceived to be a metaphysical aspect to particular places. Between 1911and 1915, de Chirico painted his ‘Metaphysical Town Square’ series, evoking ‘dream-like architectural visions of Italy’. As one might expect from a scholar of Italian cities, de Chirico often incorporated images of classical statutes alongside decisively modern shapes and contours, as well as elements of the ‘every day’.

Spanish mixed media artist Felipe Cardeña (b. 1979) is a vivacious personality without a fixed identity. A citizen of the world, the artist Felipe Cardeña has successively made Madrid, Athens, Tirana and Sofia his home. He has exhibited around the globe (his solo exhibition ‘Poetries of the End of the World’ showed at Milan’s MyOwnGallery), with site-specific installations, street art and series of collages. His Venice show is inspired by Hindu, Roman, and Greek mythologies. Cardeña finds images of ancient pottery, statues and gods from polytheistic faiths from existing printed materials, and sticks them on top of his trademark flower patterns. Lurid and luscious pop meets mythological figures in various combinations to create work with a strong historical sense and sense of humour. 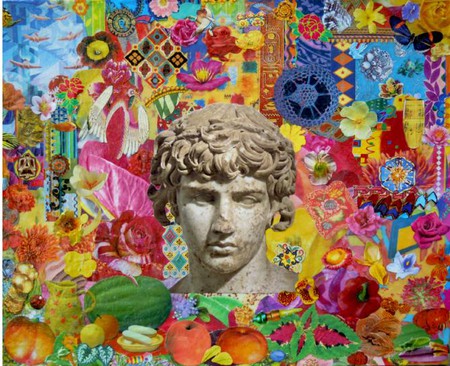 Syrian painter Nabil Al Samman (b. 1957) has exhibited extensively across the Middle East. His works often incorporate geometrical shapes, that he makes more earthy with intense, warm colours and natural, animal and human figures. His works sit in the liminal space between design and art, having constructed wall paintings, sometimes for political figures, in Damascus, Kuwait and Amman as well as smaller two-dimensional works. Like Felipe Cardeña, Samman references ancient mythology, but choses to evoke visual narratives rather than collage flat icons.

Guilio Durini (b. 1966) is best known for his homoerotic realist paintings, sometimes lovers’ portraits, describing intimate scenes between two men at leisure, and sometimes single, conspicuously handsome nude figures. Usually bedded, these figures are sometimes set against anonymous-looking cityscapes. The urban locations establish an identity for these men as contemporaries, although their poses are ostensibly borrowed from 18th century artists. 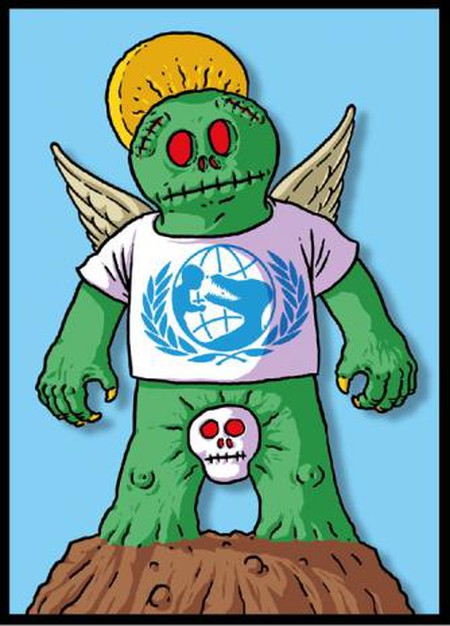 Born in Sicily’s Catania in 1967, and currently living in Milan, Dario Arcidiacono is resolute satirist, using grotesque comic monsters – mutants, zombies and other popular figures of the horror/splatter roster – to underline an acidulous political manifesto (Ecce Clown series, Buon Natale, Stop ACTA! etc.). In 1995 he created Ultrapop, a prominent art group in 1990s Italian pulp scene. These days, Arcidiacono continues his role as a global contemporary art chronicler, exploring the most curious and absurd aspects of modern reality; colouring allegory, enlarging funny details and stretching to physiological extremes, prompting the onlooker not to pass judgement, but, instead, to consider and reflect.

Roberto Paolini sculpts graceful, minimalist-inspired forms in wood, iron and terracotta. These forms are the product of an intensive research period, which seeks to ingratiate ‘cheap’ materials, such as nails and tiles, into the sculpted element. He finds a precious, and sometimes precarious, balance of shape and colour, elevating the found materials to a aesthete’s plane.

In the 55th year, Concetto Pozzati (b. 1935) returns to the Venice Biennale for the sixth time. In his first Biennale show in 1964, he presented Per Una Impossibile Modificazione, a fruit ensemble placed against its painted lookalike, which still remains among his most famous works. Pozzati’s surreal, paradoxical collages are composed of diverse materials, but often incorporate the metallic and cold.

The majority of paintings made by Brindisi-born painter Massimiliano Alioto (b. 1972) fall into a landscape/cityscape genre. But Alioto has veered into the surreal, with unsettling variations on the memento mori and biological studies. His chiaroscuro rarely veers away from the natural, and flirts with sepia tones. In Alioto’s work, nature always seems to find a way to creep through – even in the most dramatic versions of urban decadence, or his portrait of a Fender guitar.

Another veteran of the Italian art scene and restless experimentalist, Sergio Lombardo (b. 1939) is a principal figure in the eventualism movement. In 1961 he began working on his evocative pop series, Gesti Tipici, painting, first in black and white, and then in colour, some of the key political figures of the time, including Mao Tze Tung and John Kennedy. His first Venice Biennale show, in 1970, exhibited Sphere With Sirena: seven spheres whose slightest movement set off an alarming siren sound. His theories of unpredictability and urgency in art found form in his Stochastic process-driven works. 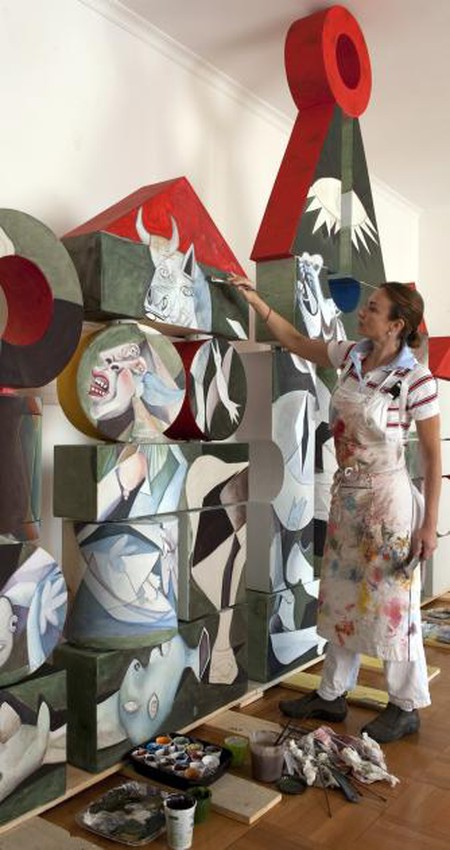 Whether Camilla Ancilotto (b. 1970) paints or creates mixed media installations, there is a certain symbiosis in the artist’s work – between human and animal, classical figurative art and modern surrealism, sculpture and painting. Her new Biennale work, Deposition, reinterprets an iconic masterpiece about the absurdity of war: Picasso’s Guernica (1937). Placed on mobile blocks of polyurethane, covered with fiberglass, Ancilotto’s work rotates on its axis, in a visual antithesis of war and peace, the comical and the tragic. Picasso’s melancholy greys mix with Ancilotto’s intense colouring, where hope springs, and profound reflection on life and death meet the freedom of creative play.

Roman artist Lidia Bachis’ (b. 1969) work takes as their subjects famous women and men, from Frida Kahlo to Sylvia Plath and Charles Baudelaire. Her studies of Plath and Baudelaire were featured in solo exhibition Fragile; a contemplation on the mortality of the body and the immortality of the soul. Bachis’ portraits consider the poetic and dramatic nature of the lives of their subjects. Vivid colours characterise much of her work, which simultaneously concurs with and contradicts her pop pieces. Apart from painting, Bachis is prolific in writing, video and installation.

In 1993 six European artists (Renzo Nucara, Carlo Rizzetti, Marco Veronese, Alex Angi, Kicco and William Sweetlove) formed the Cracking Art Group, an art collective set to change the world’s creative perspective with the radical use of plastic in natural space, establishing close ties between natural life and artificial reality. Holding strong environmental and social values, the group uses recycled or regenerated plastic to create sculptures that, despite their farcical nature, bring attention to the fact that, if the transformation of organic to artificial is not controlled, we could soon come against a new, synthetic reality. In numerous exhibitions and site-specific installations around the world, the sextet has placed a colony of giant blue snails in a cement square (ReGeneration), lines of fuschia penguins and green bears facing one another in a green field (Brainstorming), and alligators attacking a pack of red cows satisfying their thirst (On The River).

Helsinki-born Hannu Palosuo (b. 1966) currently works in Rome, having spent some time in Berlin and Stockholm. He returns to the Syria Pavilion for the second time, after his 2009 participation with ‘None of them is the truth’, an immersive paint installation that covered the entire pavilion space. Through his work, the artist presents how a recurring theme can be transformed into ultimate reality. Playing with memory and recollection, Palosuo paints every day in colourful contrasts, using references and symbols, that bring out the positive/negative duality of the image, its presence and its absence.