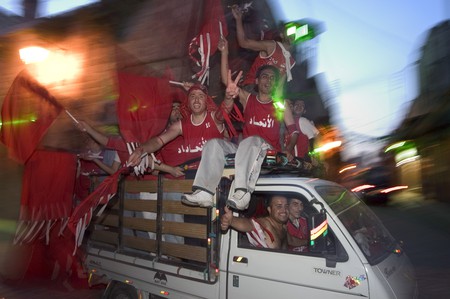 As with most weekends, there were thousands of soccer teams playing matches all across the globe. One match in particular, however, took on far greater significance.

In Aleppo, Syria, Al-Ittihad played local city rivals Al-Hurriya, winning the match 2-1. But this was the first professional soccer match in the city for five years and comes after the government finally gained total control of the city last month, following a significant offensive.

While both soccer clubs have been in existence for over 60 years, and played each other on numerous occasions, there are very few games, if any at all, that hold greater importance than the friendly the two played over the weekend.

Despite being an Aleppo side, Al-Hurriya have been playing their games in Latakia, a city 180km to the south-west of Aleppo. Incredibly, throughout the conflict, the Syrian Premier League has managed to somehow continue operating, but only in Latakia and the country’s capital, Damascus. The civil war has seen millions flee the country, with professional players having joined the exodus, been killed or joined rebel forces in their fight against Syrian president Bashar Al Assad. Amid all of this, football has continued, but not in Aleppo.

While the city hosting professional soccer again is a significant achievement, the signs of war are still very much at the fore, understandably so. The Ri’ayat al-Shabab Stadium, where the game was played, wears damage caused by bombing to the stadium, just like the buildings that surround it, with any grass on the pitch dusty and brown, beaten by the country’s winter. Despite the modest crowds, there was still a hefty military and police presence, and political banners draped over the stands. Before the civil war took hold of Aleppo, ordinarily the stadium and its 10,000 capacity would host Syrian 3rd Division football club al-Orouba, but in this instance it provided neutral ground for the two Premier League teams playing. 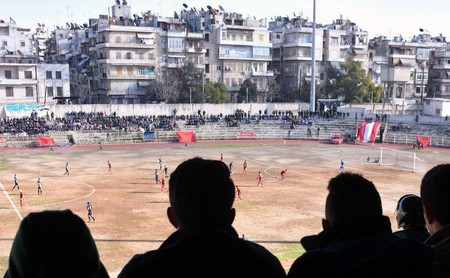 Both sides have won the Syrian Premier League before, Al-Ittihad on six occasions and Al-Hurriya twice, but neither has been champion since 2005, when Al-Ittihad won their last title. Since then there have been 10 seasons, with all but one being won by sides from Damascus, the only other side to have won a national title in that time has been Al-Karamah, a team based in Homs.

When the Syrian Premier League first formed, for the 1966/67 season, it was Al-Ittihad that claimed the first title. They followed it up by repeating the feat 12 months later. Despite the success of the Damascus-based clubs since then, it is Al-Ittihad who play in the country’s largest arena, the Aleppo International Stadium and both Aleppo clubs have continued to have players good enough to represent the national side, even amid the devastation that the city has witnessed.

There is a long way to go as Aleppo reintegrates with the rest of Syria, in a far wider context than just soccer. But having this 90 minutes of sporting entertainment is a welcomed break to what has become a thoroughly depressing normality. Aleppo has been a major part of Syrian sport, this is hopefully the first step in enabling it to continue those traditions.