The Best Things to Do in Al-Ahsa

Culture Trip selects the best things to do in this UNESCO-listed city.

Al-Ahsa is one of the world’s largest natural agricultural oases, with over 3 million palm trees and many hot and cold springs. The oasis, which was recently named as a UNESCO World Heritage Site, is also one of the greenest regions amid the otherwise arid deserts that make up most of Saudi Arabia. Here’s our pick of the best experiences around.

Al-Ahsa has over 150 naturally occurring springs of hot, warm, and cold water. Because of this ample supply of fresh water, Al-Ahsa was one of the first populated areas of the region.

Some of the most visited springs include Al-Jawhariah, Um Sab’ah, Al-Khodoud, and Al-Harah. The springs are considered to have ‘healing’ properties because of the high concentration of minerals in the water, and it’s common to find locals and tourists alike taking a sip or taking a quick splash through it. Some even bring plastic bottles to take water back with them!

Al-Ahsa has a vast number of natural springs | © Saudi Tourism

The oldest mentions of Qaisariya Souk (open-air market) have been found in the diaries of travellers dating back to 1822, making it at least nearly 200 years old and one of the oldest markets in Saudi Arabia.

The souk, that spans over 7,000 sq meters (75,347 sq feet) and houses 420 shops, hasn’t changed much in two centuries. Its buildings are made of clay bricks that keep it cool throughout the year and resonate with the architectural styles from years ago. Expect to find everything from clothes, perfumes, oils, spices, vintage crockery, carpets and jewellery. It is advisable, however, not to shop for things that you can probably find in a mall in the city nearby, because everything is a lot more expensive at this tourist attraction. 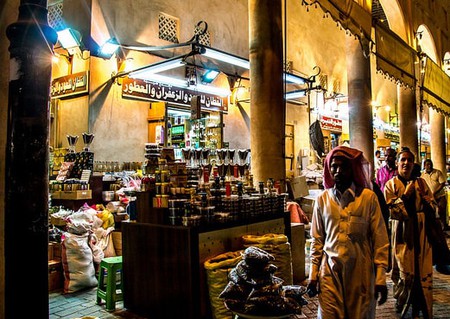 Ibrahim Palace was built during the early days of the Ottoman rule and remained an important government building throughout the era. Parts of it have been converted to a museum now and the mosque is still being used today.

The old stables, the guards’ dormitories, and a number of rooms are preserved as they were, and the museum inside the palace has plenty of historic relics, paintings, and photographs. The building is fairly unassuming and there is usually no crowd around, so it’s best to ask someone for directions if you aren’t with a tour guide. Entry is free.

The mountains – and the caves – of Al Qarah are surrounded by palm tree farms and small villages, and have become a tourist favourite as well a popular place for nearby locals to spend their evenings.

Al Qarah is a 25-minute drive from the main city of Al-Ahsa (also known as Hofuf) and entry is SAR 50 (USD$13.30). The caves are known for their distinct shape and span about 1.5 km (0.9 miles) through the mountain. Local legends say that the cave has sheltered many figures from history including Abraham (known as Prophet Ibrahim in Arabic), the Chaldeans (of Babylon) and kings of the Dilmun civilisation.

There is also a small museum, cafes, a mosque and a couple of gift shops in close proximity to the mountain. The cave is well-lit and parts of it are now wheelchair accessible. 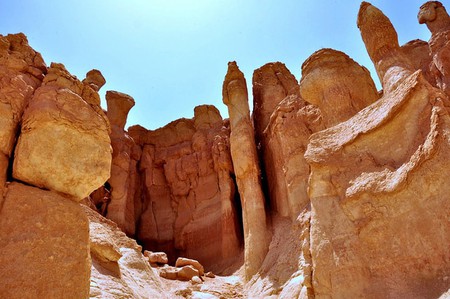 The caves in Al Qarah Mountain | © Ino_Florencio (Been Busy) / Flickr

The Dougha Handmade Pottery Factory located in Al-Ahsa is one of the oldest pottery centers in Saudi Arabia. The factory was started by Dougha Al Garash, a trained potter, over 150 years ago. He passed his skills down to his sons and grandsons who are now running the factory.

Potters will give you a guide around the factory, share its history, and let you try your hand at the potter’s wheel. The factory also has a store where you can buy a number of clay souvenirs – everything from pots, flasks, vases and vessels – with prices starting from as low as SAR 20 (USD$5.35). 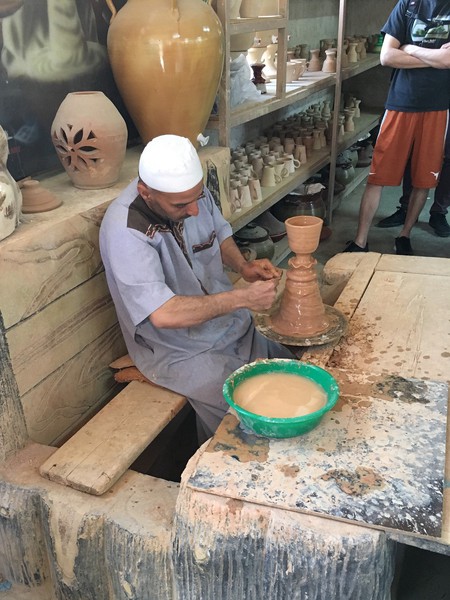 The Yellow Lake is one of the few natural bodies of water in Saudi Arabia and spans about 12 km (7.5 miles) across the sand dunes on the outskirts of Al-Ahsa city. The lake, amid miles of sand, is a local favourite and families living in Al-Ahsa and around often go there on the weekends.

There are no roads leading up to the lake and the best way to reach it is with a guide (or just someone who knows the way) with a 4-wheel drive that can safely navigate through the sand dunes. It’s possible to lose phone signals in the desert, so it’s highly advisable not to attempt to go there without someone who really knows the way! 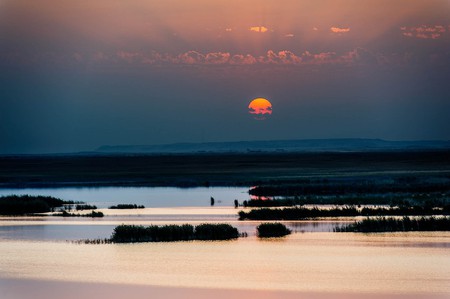 For anyone looking for a break from outdoor activities and excited to spend some time indoors, Al-Ahsa mall is a good place to be. It’s an economical space to do some shopping and try some of the region’s local fast food chains. It’s also a glimpse into the newly developing urban side of Al-Ahsa.

Al-Ahsa is the largest date oasis in the country with more than 2 million date palms, so no trip to Al-Ahsa is complete without trying as many of the varieties available in the season as possible. The Khalasah date, particularly, grows exclusively in Al-Ahsa and is considered to be amongst the best in the world. They are available everywhere – from sellers sitting on the sides of the pavement to some of the most luxurious stores around. They are usually eaten with Arabic coffee.

The Hezawi bread – found in all bakeries around the city – is unique to Al-Ahsa and made with dates added to the dough to make it naturally sweet. Locals tend to eat it with cheese, to add a bit of saltiness to the sweet. 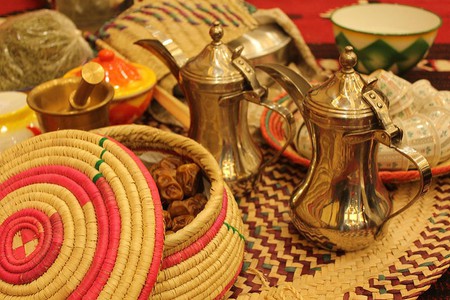 The mosque is located in the village of Al-Kilabiyah, just a few kilometers from Al-Ahsa. Historians state that this was the earliest mosque built in east Arabia and the second ever in the world (the first being in Medina). It was built the in 629AD by the Bani Abdul Qais tribe which lived there before and early in the Islamic period. Most of the mosque’s original structure has been lost – only five of the original mud-brick arches still stand -but the site is still used for prayers and is open to tourists. 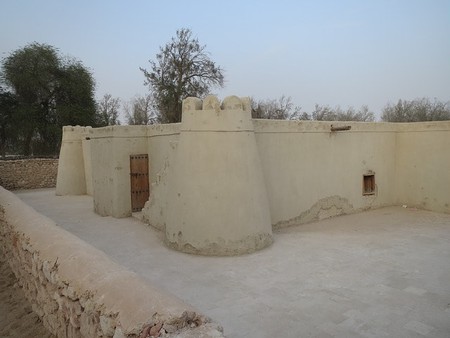