The Best Restaurants in Riyadh 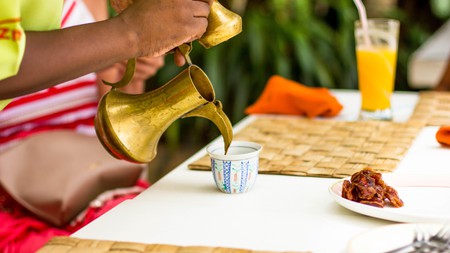 The Kingdom’s capital is home to hundreds of restaurants serving dishes from around the world, and dining out in Riyadh has become a major part of the city’s leisure and socialising culture.

Riyadh is landlocked by one of the world’s largest deserts, but as the city expanded into a modern metropolis, its cuisine – once restricted to traditional Saudi dishes created with a few locally sourced ingredients – also evolved and grew into an international culinary scene that is showing little sign of slowing down. Today, in addition to the region’s own typical food, Riyadh’s diners can sample a range of international dishes, from great burgers to Italian-style pizzas. 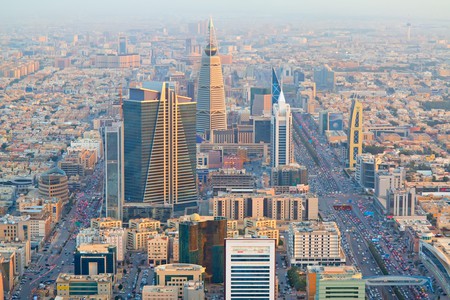 Restaurant, Middle Eastern, $$$
Facebook
Email
Twitter
Pinterest
Copy link
Share
Map View
Named after the central region of Saudi Arabia in which Riyadh is located, Najd Village offers authentic Saudi Arabian cuisine in a traditional setting. The restaurant’s layout, which is divided into small rooms that can accommodate groups of friends and families, celebrates traditional Arabian hospitality and offers total privacy for its diners, especially women who may not want to be seated in public with men. Each room is furnished with comfortable low sofas or majlis, and food is served on the floor, usually in large portions that are ideal for sharing. For the ultimate Saudi Arabian experience, try the camel meat kabsa – a large plate of rice (enough to serve five or six people) with huge chunks of succulent camel meat on top.
Open In Google Maps
King Abdul Aziz Branch Road, Alyasmin Riyadh, Riyadh Province, 11564, Saudi Arabia
+966920033511
Visit Website
Give us feedback

The Globe is one of the most iconic fine-dining restaurants in the capital. Nestled in a glass orb at the top of Faisaliah Tower and part of the Al Faisaliah Hotel, it offers a variety of Arabic and international dishes, nearly all of which are served as three-course meals. Recommended are the Wagyu steaks and Canadian lobster, expertly prepared by internationally trained chefs. The restaurant also serves a high tea at 4pm from Thursday to Saturday, which includes delicious sandwiches, sushi, pastries and teas. The service is unparalleled throughout, and an intimate atmosphere is supported by the attentive staff.

There are dozens of Indian restaurants in Riyadh that serve staple curries, but Zafran has revolutionised Indian cuisine in the region. This award-winning Indian bistro chain arrived in Saudi Arabia in 2018 after opening a number of successful branches in the United Arab Emirates. Zafran’s Riyadh branch, in particular, is a cultural mix of India and Arabia, which is reflected in its interior, featuring artwork by local artist Jeffar Khadli. The menu is expertly curated by Chef Gaurav Singh, who took inspiration from his travels to Northern India, and incorporates cuisines from the region’s vibrant provinces. On offer are fusion and traditional Northwestern Indian dishes, including vegetarian options such as corn and spinach kebabs and paneer tikkas, chicken biryani and desserts like halwas, pastries and Indian puddings. Very popular among diners, and one of the signature dishes at Zafran, is phirni, a traditional rice pudding flavoured with saffron and pistachio.

In recent years, Riyadh has been experiencing a wave of burger joint openings and pop-ups serving all sorts of new takes on classic fast food. Hamburgini, however, has taken a straightforward, no-gimmicks approach to its burger offering. The menu is simple: choose between a chicken or beef burger; decide whether to have a single, double or even triple patty; pick from a range of fresh toppings and sauces; and combine it with fries and a drink of your choice. The simplicity of the menu is matched by the simple decor; the colour scheme throughout is orange and white, and the interior is unfussy, neat and bright with an aesthetic that particularly appeals to a younger crowd, not least because the low prices mean that the restaurant serves some of the most affordable burgers in town. A single patty costs about SAR 10 (£2), which about a third of the price of a burger at similar eateries.

La Rustica is a cosy pizza parlour nestled in the bustling Olaya district, Riyadh’s buzzy financial area known for local landmarks such as the Kingdom Centre. This hidden gem is run and managed by a Saudi woman who learned the authentic art of pizza making in Naples and brought the taste and the technique back home with her. With brick walls and low-lit interiors, this intimate establishment can seat a dozen tables – though a queue of people waiting for a table is a regular feature here, the food is absolutely worth it. The menu is concise with less than a dozen items in total, including pizzas and a handful of Italian appetisers and desserts – a rare find in Riyadh. Purists recommend the wood-fired oven-baked margherita or rocket pizzas, or the burrata salad, a delicious serving of fresh burrata cheese that’s perfect for sharing.

This famous family-run baklava shop first opened its doors in Turkey in the late 1800s. Over time, the business expanded into dozens of sweet shops, cafés, restaurants and even a cooking school that has been training the best baklava chefs for decades. Now, the empire has arrived in Saudi Arabia where, a few years ago, Gulluoglu opened its first branch in Riyadh. Since then, it has quickly become the go-to place for Turkish buffet lunches and dinners in the capital, prompting the opening of a second branch. Both restaurants offer à la carte and buffet menus, and experienced Turkish chefs prepare traditional flatbread pides, nearly a dozen types of chicken, lamb and beef kebabs, and other grills. Gulluoglu’s sweet counter is also unmissable, with a range of desserts; most of them are imported directly from Turkey, while others, such as the world-famous baklavas, are made fresh in-house.