These Are the Best Apps for Muslims

Islamic GPS in the Prophet's Mosque in Medina | © Islamic GPS

From looking up prayer timings to finding halal food in your area, Culture Trip selects the best apps for Muslims in 2018.

There are approximately 1.6 billion Muslims in the world, and the global Islamic market is projected to be worth over £3.8 trillion by 2020. The mobile app industry has been forging ahead with religious apps that cater to Muslims and their lifestyles. Here are the most useful Islamic apps out there right now.

This app contains the entire Quranic script, as well as translations and recitations, but it is so much more than just a mobile version of the scripture. Quran Companion has games and flexible learning techniques to make it easier to memorise the Quran (be it just parts of it or the entire scripture). There are also guided lesson plans, motivational daily leaderboards and challenges that make memorisation easier. 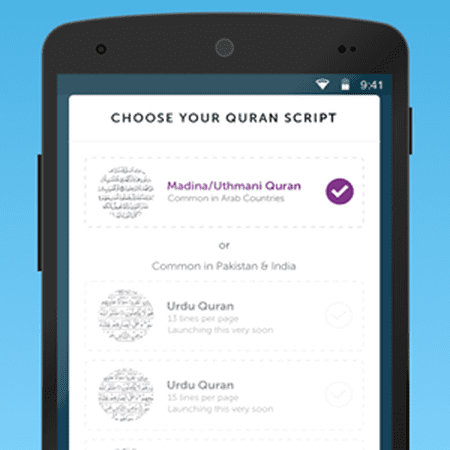 MuslimPro, with over 10 million downloads, is the most popular Islamic app in the world right now. It is available in 15 languages and offers tools that provide assistance and guidance to Muslims carrying out everyday religious rituals.

For instance, salah is an obligatory act of worship for Muslims that involves praying at five prescribed times a day. These prayers are physical, mental and spiritual acts of worship and the rituals include standing, bowing and prostrating oneself while reciting verses from the Quran, as well as other prescribed prayer phrases, while facing the Kaaba in Mecca.

MuslimPro offers prayer timings (the timings vary by day and place; for instance, the first prayer of the day is performed at around sunrise), the direction to Mecca (known as the qibla direction) and the Quranic scripture in Arabic, as well as its translation in a number of languages.

Seerah is an Arabic term that means to be on a journey. A person’s seerah also refers to their biography, or journey through life. And the Seerah-al-Nabawiyya refers to the Prophet Mohammad’s biography (al-Nabawiyya is Arabic for ‘the prophet’).

The Seerah App is an immersive and beautifully produced storytelling app that narrates the Prophet Mohammad’s biography through animation, games and other interactive techniques. It’s perfect for children, as well as adults who want to learn more about the life of the prophet. 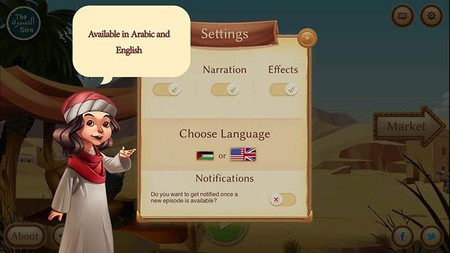 The app is available in English and Arabic | © Seerah App

It is believed that the Quran was revealed to Prophet Mohammad in the month of Ramadan (the ninth month of the Islamic calendar) and is considered one of the holiest times of the year by Muslims.

Fasting during daylight hours (from dawn to sunset) during Ramadan is considered mandatory in Islam and many Muslims also choose to devote more time to spirituality during the month.

Ramadan Legacy is an app designed to help Muslims keep track of their religious rituals and the progress they make through the month. The app allows you to track your fasts and prayers and how much Quran you have recited during the month. It is community-based and allows users to compare their progress with others’, should they opt to. 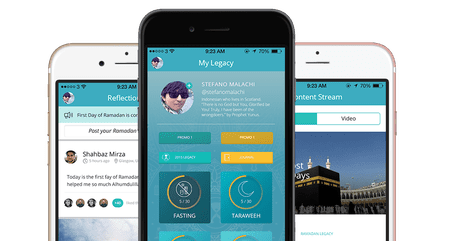 Rate My Sermon has been developed by Saudi Arabia’s Ministry of Islamic Affairs and will allow mosque-goers to know how long a sermon will be in advance, as well as rating preachers on the quality of what is being said.

Another important purpose of the app is to ensure that all sermons meet the ministry’s criteria, and is part of Saudi Arabia’s intention to reform religious teachings in the country and to ensure that extremism is curbed.

The app is still in the works of being rolled out, and the details of how the app will allow sermons to be monitored are yet to be announced.

Zabihah is an Arabic word that refers to Islamic ritual slaughter of animals for meat. This method involves the name of God, or “in the name of God” being said aloud by the butcher before slaughtering an animal, and then using a sharp knife on the throat of the animal in a swift, deep incision to ensure minimum pain.

An app of the same name has been developed by the founders of zabihah.com, the world’s most comprehensive halal restaurant online database, that has information on, and reviews of, halal food and restaurants worldwide. This app finds all Halal food options, and reviews by other users within an 80-kiilometre (50-mile) radius. 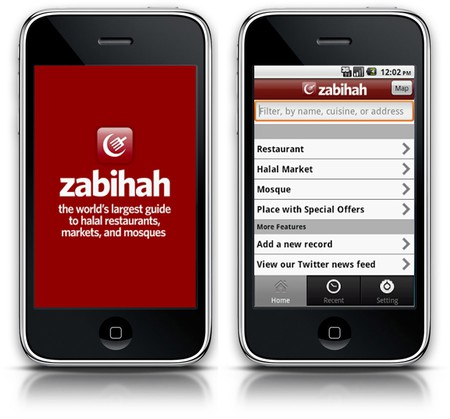 Over 2,500 halal restaurants around the world are listed on Zabiha | © Zabiha

Modanisa is a large fashion brand, headquartered in Istanbul, that offers modest attire including daywear, abayas, scarves, prayer dresses, activewear and swimwear. Modanisa’s online store and app have quickly turned it into a global brand. The app is available in six different languages and houses 300 brands, making it one of the biggest (and most downloaded) mobile-based modest fashion stores internationally. 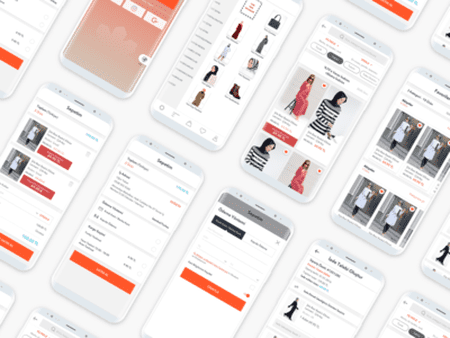 Souqina is another mobile-based marketplace that focusses on modest fashion. Anyone can create a profile and launch their own e-store through the app and also purchase directly from other profiles from around the world. The app allows users to ‘follow’ others on the app and keep up with their profiles and e-stores. 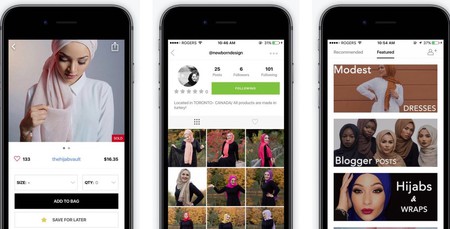 Islamic GPS allows users to find mosques, but takes it a step further than other mosque-locating apps by creating an immersive experience using augmented reality.

If you hold up your phone, the nearest mosque (within 20 kilometres or 12 miles) will appear with directions. For historically significant mosques and other Islamic landmarks, information about the site will appear on the screen when the phone is pointing in in its direction.

The app was launched in 2016 and now functions in 94 countries. Islam’s holiest sites, Mecca, Medina and Jerusalem, are all listed on the app. 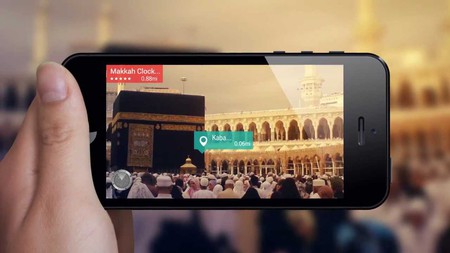 It includes interactive maps, images and short prayers, as well as counters to keep track of the number of prayers a user makes.

The charging of interest is strictly forbidden in Islam, and Halal investments offer alternatives that allow Muslims to take part in the financial market while avoiding the consumption of interest.

Halal investments also encourage investing in socially responsible ways, and avoid investing in industries that promote products or habits that are forbidden in Islam, such as alcohol. For investors (or even aspiring ones), Investro’s mobile-based platform makes halal investing easier and more accessible. It also allows ‘practice’ investing for people who aren’t yet comfortable with putting real money on the line, but want to start learning basic investing.

MuzMatch is a London-based app that connects single Muslims from around the world. It allows users to create profiles and search for other single Muslims according to the filters that they set. It has over 145,000 global users and boasts that over 3,000 marriages have resulted so far. 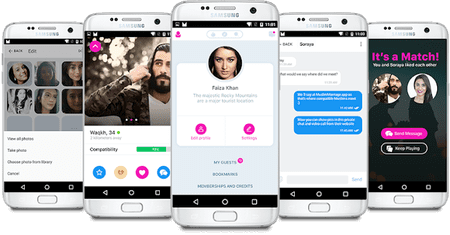 Scan Halal scans the barcodes on food items to verify if they are halal or not, by comparing them to its database of over a million products. The app can also be customised according to individual preferences, to identify alcohol or animal byproducts in food, making it extremely useful for vegans and vegetarians as well. 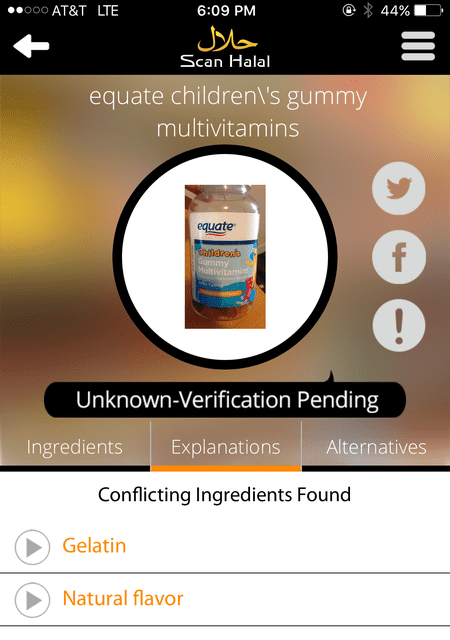