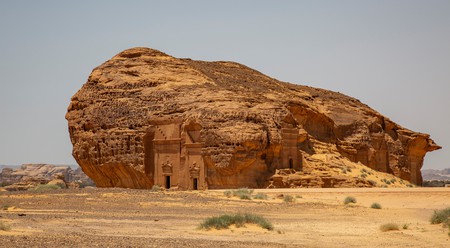 There’s been growing interest in tourism across the Arabian Peninsula in recent years. Saudi Arabia is arguably the most prominent of these destinations given its large media presence and equally impressive expenditure on promoting itself as an alternative holiday for adventurous travellers. The jewel in the Saudi crown is AlUla, an ancient city that has emerged from the desert in recent years with a wealth of incredible treasures, culture and modern places to stay.

If you are going to label yourself ‘The World’s Masterpiece’ you are going to have to go some way to silencing the inevitable doubters. How can a little known corner of Saudi Arabia compete with the likes of the Taj Mahal in India, The Leaning Tower of Pisa in Italy or Petra in Jordan? That final spot, a Nabatean city carved in distinctive red rock, is the best comparison to AlUla but there’s also a lot more to the Saudi region on the western side of the country.

If you have heard of this region then you’ve no doubt seen the incredible structures of Hegra. Saudi Arabia’s first UNESCO World Heritage Site is as breath taking in person as the images would suggest. 110 remarkably preserved tombs have been left standing against the backdrop of the desert. It’s hard to imagine places like this ever existed, and harder still to comprehend that with modern travel trends this Nabataen city has remained largely untouched for centuries. Having recently visited the ancient sites of Cairo and Luxor, the lack of crowds here is a real bonus. Of course, part of this can be explained by the fact that Saudi Arabia has remained largely closed to foreign tourists until recent years but just as this attitude is changing so is the careful opening up of historical sites that even locals know little about. 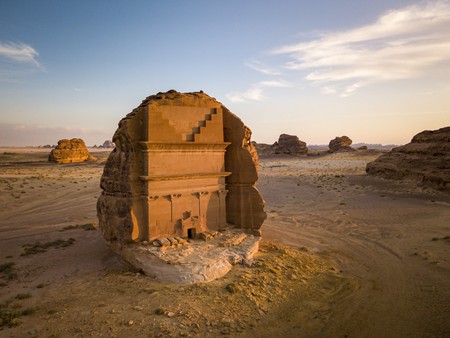 As part of the Saudi 2030 project, tourism is set to become central to the efforts the country makes to appeal to a global market. Local guides are being trained and outsiders will be surprised to learn that both men and women can apply for these positions. The perception that the country is still largely divided on the basis of gender and religion is something that doesn’t appear to be accurate on the ground, at least not in AlUla. Indeed one of our guides, a young lady who is from this part of Saudi Arabia, was very proud to get behind the wheel of a jeep and show us that the pervading idea that women can’t drive in the country was utter nonsense.

The Royal Commision for AlUla (RCU) has undeniably done a great job of opening up the region to tourists. The airport here will soon be able to accommodate international flights from all parts of the world and we were able to fly in via a stopover in Dubai. This short commute is one that many locals make for weekend getaways or longer holidays and it also means that AlUla is an intriguing option if you want to experience a more cultural adventure when next in the region. Locals love their cars too, and you’ll often find them hardly batting an eyelid at the 1,100 km drive to capital city Riyadh. The roads are impeccable and safe for all travellers to use. 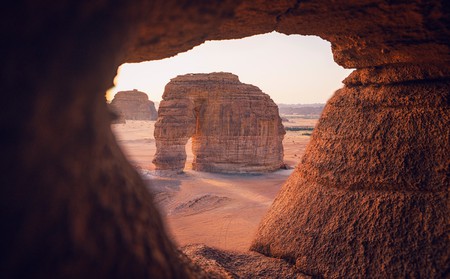 As well as the incredible sites of Hegra, there is an excellent use of the desert here that turns the landscape into a playground. Part of what makes AlUla so special is the natural rock formations dotted around the region. The iconic Elephant Rock (Jabal Alfil) is a must when visiting but so is the remarkable Maraya, the world’s largest mirrored building. These two very different landmarks highlight how the blank canvas of the Arabian desert can be used to excellent effect. As if to confirm this, make sure you check out Desert X. The open air art exhibition returned to AlUla in 2022 and saw 15 artists present works around the theme of ‘mirage and oasis’.

To get the best view of Desert X and AlUla in general, you can’t beat a helicopter tour. You’ll get to see places like Jabal Ikmah, a collection of rock art and petroglyphs that once functioned as an open air library. You’ll also flyover AlUla Old Town, a series of narrow pathways and closely-packed stone and mudbrick buildings. When exploring at ground level you’ll find plans for some of the most exciting hotel projects imaginable, fully developed and ready to start construction.

It might seem like these extraordinary places to stay are just fantasy and unlikely to see the light of day. We’ve all seen rendered images and elaborate graphics of buildings that are never going to see any guests, but AlUla already has these outstanding places ready to welcome visitors today. Habitas is a brand known for its sustainable and experience-led approach, but nothing can quite prepare you for a visit to their AlUla resort. Set in the ancient oasis of the Ashar Valley, Habitas AlUla is made up of 96 villas spread over a large area surrounded by canyons. At night these red rocks hold onto any ambient light and give off an effervescent glow which only adds to the jaw dropping views when looking up at the evening sky. Stargazing isn’t something you have to chase here, you just crank your head backwards every night.

You’ll get to experience the six programming pillars of the Habitas brand in full here with the concepts of wellness, music, learning, adventure, culinary and culture to be found everywhere. Guests can get around by calling a buggy pick up service or hopping on one of the e-bikes every villa comes equipped with. It’s a fantastic idea and also ties in with the genuine efforts for sustainability the property is going for.

When preparing to leave AlUla I did wonder about how large numbers of tourists would impact the charm of the place. There’s a risk that the tombs and temples of Hegra turn into nothing more than a bucket list item alongside the likes of Machu Piccu or Stonehenge in the next decade. Reassuringly, our guide told me that one of the plans already in place is to limit the number of visitors to a manageable amount. In this way the destination has already implemented strategies that other cities are only now adopting after years of overtourism.

With that in mind, you really should aim to be one of the few who have seen the treasures of AlUla first hand.