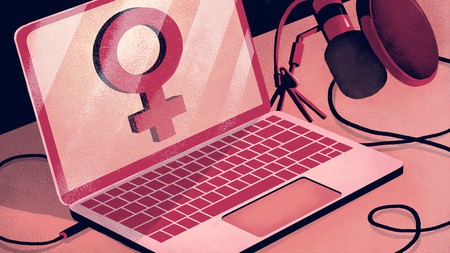 A group of women in Saudi Arabia is running an underground radio station that serves as a platform to address women’s rights and gender equality issues in the country.

Nsawya FM is a Saudi Arabian feminist radio station that is addressing issues of harassment, domestic violence, workplace inequality and other gender-related issues in Saudi Arabia.

The women involved in the running and production of Nsawya, which is Arabic for ‘feminist’, are not working journalists but a group of Saudi and Saudi-based women who started an ‘archive’ of the current and ongoing changes that are taking place in the Kingdom. They wanted to document their personal narratives and provide an insight into what it is like to be a woman striving for gender equality in Saudi Arabia.

The online show involves just a laptop, editing software and a microphone

Despite the low production quality, the first two episodes – each an hour long – that aired through a live audio-streaming website called Mixlr, received an overwhelming response and were noticed by several international news media.

Not all response was positive – many of the listeners have criticised the online radio show for being propaganda against Saudi Arabia and its culture.

But other voices have also been asking the activists to focus on the positive aspects of the ongoing changes and to “give the new Crown Prince a chance”.

Saudi Arabia’s current Crown Prince, Mohammed Bin Salman, has pushed for significant equality for women in the country. In 2018, the ban on women driving was lifted and permission to enter stadiums was granted. However, these changes do not come without scrutiny and women’s rights activists have continuously been pointing out the many areas where women are still under persecution in the country.

For instance, many women’s rights activists have been arrested for their work over the years and, despite international pressures, are still in prison.

Nsawya FM has also been blocked in the country

The station’s Twitter account was blocked in the country almost immediately after the first episode aired and, not long after, the direct link to their account on Mixlr was also blocked.

Social media platforms, such as Twitter, are particularly popular in Saudi Arabia for public conversations on society, culture and politics, and often serve as an alternative to public spaces that are less easily accessible in the country for such discussions and debates.

“We were not expecting such a large audience – we were just looking for a more gradual growth over time”, says one of the producers, who wishes to remain anonymous. “We just wanted to talk about women’s rights in our country and have a platform for ourselves.”

The radio station was originally launched by 11 women, all except two were Saudi nationals and some were living in Saudi Arabia. It has since grown to a team of 21 and all activists are practising strict anonymity due to fear of reprisal.

The women say that some of their biggest challenges right now include juggling studies and work with production as well as figuring out communication because of the varying time zones they live in.

“It is going to be daunting, but we want to shed light on issues that are so close to us”, says a producer. “We have received a lot of support, which we are grateful for. As for the threats, we just ignore them.”

They are currently working on campaigns to end the male guardianship system in the country, which they believe is discriminatory.

Under this system, men are given the authority to make a number of important decisions on behalf of their female relatives.

The group has stated that their goal is to be the voice of the silent majority and to give everyone the opportunity to share their views.